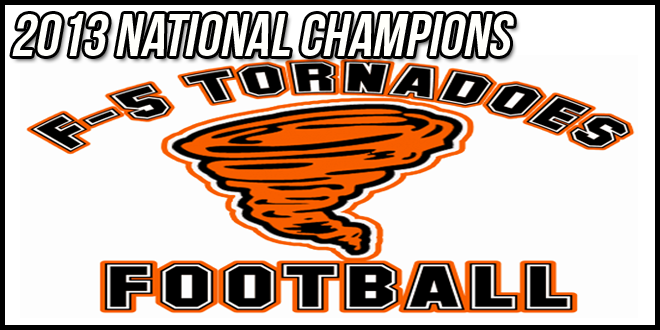 It wasn’t that long ago that Miami-Dade or even South Florida football had some issues on discipline on the football field.

However, that has changed in the last couple of years.

The Booker T. Washington Tornadoes have laid their claim to six of seven national titles that have been awarded by different national media outlets.

So far looking back over the last five years, Miami Northwestern, St. Thomas Aquinas and now Booker T. Washington have claimed at least one mythical national titles in various polls and rankings.

However, looking at 2013, it was not as easy as you think it was for Booker T. Washington to have claim six weeks of the seven mythical national titles.

And yes, the Tornadoes might have won the Class 4A State Championship for the second straight year.

But, Allen, Texas and St. John Bosco, CA were doing everything they could to claim a piece or outright own one of the mythical national titles.

So why was Booker T. Washington chosen to be the national champions over two other teams that had resumes that were nearly the same? Dallas Jackson of NationalHSFootball.com and Steve Spiewak of MaxPreps gave us their reasoning behind their choosing of the Tornadoes.

“It is a combination of factors. The talent they have matches up with everybody, matches up with anybody.  This is just a rare year where where Booker T. [Washington], Allen and St. John Bosco are all extremely talented and all undefeated.,” Jackson said.

Pretty much you can put stock in to the Tornadoes for defeating three state champions this season as to why they are national champions in the HSFB 100 on National HS Football.

Steve Spiewak echo almost the same of what Jackson said when talking about his selection of Booker T. Washington as National Champions in the MaxPreps Xcellent Top 25.

“It was an incredibly close race for the No. 1 spot because both Allen and St. John Bosco finished very strong. Ultimately, I think Washington was the most dominant team from start to finish against a very challenging schedule.,” Spiewak said.

And the 55-0 win against Norcross to start the season and a week two win over three-time Class 6A State Champion Miami Central helped get the ball rolling in favor of the Tornadoes.

“Their victories over [Miami] Central, which could’ve competed with any of the Top 3 teams by season’s end, and Norcross–Georgia’s AAAAAA champion–were especially impressive.,” Spiewak said.

And their was nothing caused Booker T. Washington to be dismissed from the top spot during most of the season, not even a close game against Bishop Gorman.

“They didn’t do anything to cause concern for that. I have moved number one teams down a little a win in the season after a win, but there was nothing about this Booker team that made me think they weren’t number one.,” Jackson said.

With that said, the Booker T. Washington Tornadoes are your 2013 National Champions.

* – The High School Football America Top 25 is based upon a power rankings formula, not human opinion.