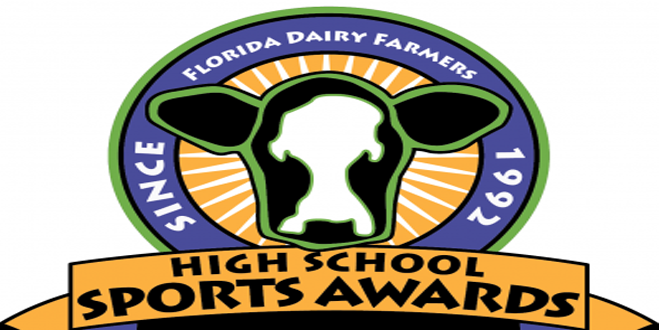 GAINESVILLE (December 30) — The eight individual class finalists for the 2013 Florida Dairy Farmers Mr. Football and Football Coach of the Year have been announced following balloting by a statewide panel of high school football coaches and prep media representatives.

Every finalist was the leading vote-getter in their classification, making each one the Player of the Year or Coach of the Year in his class. The two overall winners will be announced following a final round of balloting by coaches and media.

Following are the eight finalists for the 2013 Mr. Football Award:

Robert Thomas, Apopka, Senior, Running Back, Class 8A Player of the Year
Thomas broke a 29-year-old Metro Conference single-season rushing record while leading the state with 2,371 yards on 230 carries (10.3 ypc), scoring 30 TDs for the defending 8A champs and 2013 runner-up.

Daniel Parr, Palm Beach Gardens Dwyer, Junior, Quarterback, Class 7A Player of the Year
Parr completed 231-of-327 passes for 2,238 yards and 23 TDs with only three INTs, capped by a 21-of-27 effort for 236 yards and three TDs in the state final in leading the Panthers to this year’s state championship.

Dalvin Cook, Miami Central, Senior, Running Back, Class 6A Player of the Year
Cook rushed for 1,940 yards and 34 TDs on 177 carries (11 ypc) in leading the Rockets to their third state title in the last four years, highlighted by a 223-yard, four-TD effort on 19 carries in their state final win.

Sony Michel, Plantation American Heritage, Senior, Running Back, Class 5A Player of the Year
Michel, a Georgia commit, ran for 1,840 yards and 24 TDs on 214 carries (8.6 ypc) in leading the Patriots to their first state championship, capped by rushing for 98 yards and three TDs on 13 carries in the state final.

Isaiah Ford, Jacksonville Trinity Christian, Senior, Wide Receiver, Class 3A Player of the Year
Ford, a Louisville commit, had 37 catches for 719 yards and 12 TDs and accounted for 1,067 all-purpose yards and 17 TDs for the state champs, including 102 rushing yards and two TDs on nine carries in the state final.

Caleb Lewis, Lakeland Victory Christian Academy, Junior, Quarterback, Class 2A Player of the Year
Lewis was 193-of-355 passing for 3,025 yards and 28 TDs, added five rushing TDs, punted 33 times for a 36.7-yard average and converted 30 PATs and two FGs in leading the Storm to a state runner-up finish.

D. J. Thomas, Baker, Senior, Running Back, Class 1A Player of the Year
Thomas was the driving force for the 10-1 Gators, rushing for 2,083 yards and 30 TDs en route to leading them to an undefeated regular season, a district championship and the playoffs.

Following are the eight finalists for the 2013 Football Coach of the Year:

Nate Hudson, South Dade, Class 8A Coach of the Year
In just his second year at the helm, Hudson guided the Buccaneers to a 14-1 record and the 2013 state title, the program’s first state championship in history. Overall, Hudson has posted a record of 24-3 in his two seasons as a head coach.

Jack Daniels, Palm Beach Gardens Dwyer, Class 7A Coach of the Year
Daniels, who has been head coach at Dwyer for 18 years, led the Panthers to their second state championship (4A, 2009) as well as their first undefeated season in program history. As a head coach, Daniels has posted an overall record of 187-41.

Roland Smith, Miami Central, Class 6A Coach of the Year
In his first year as Central head coach, Smith, who previously coached at Miami Northwestern from 2001-06 and won a state title there (6A, 2006), guided the Rockets to a 14-1 record, their second straight state title and third crown in the last four years. He is 84-14 overall as a head coach.

Mike Rumph, Plantation American Heritage, Class 5A Coach of the Year
In his first year as a head coach at American Heritage, Rumph led the Patriots to a 14-1 record and their first state final appearance since 1998, capping it off with a win over Clay that secured the program’s first state championship in history.

Tim Harris, Sr., Miami Booker T. Washington, Class 4A Coach of the Year
Harris, the Class 4A COY for the third straight season and the 2012 Coach-of-the-Year, led the Tornadoes to a 14-0 season, their second straight state title and third overall (2007) as well as a No. 1 national ranking. In eight years as a head coach, Harris has compiled a 99-10 career record.

Verlon Dorminey, Jacksonville Trinity Christian, Class 3A Coach of the Year
Dorminey, a veteran coach who just finished his 23rd year at Trinity Christian, led the Conquerors to a 12-1 record and the 2013 state championship, the program’s fourth overall (1A – 2002, 2003, 2010). He has compiled an overall coaching record of 220-59.

Mike Tunsil, Hialeah Champagnat Catholic, Class 2A Coach of the Year
Tunsil, who just completed his fourth season and has been head coach since the program’s inception, led the surprising Lions, who were 2-9 last year, to a 14-0 record and their first state title. In five years overall as a head coach, Tunsil has posted a 32-24 record.

Andrew Thomas, Trenton, Class 1A Coach of the Year
Thomas, the Class 1A COY for the second year in a row, led the 2012 state runner-up Tigers to a 12-1 record and the program’s first state championship, capped by a 14-0 win over previously unbeaten Blountstown in this year’s state final. He is a 36-3 overall in three years at Trenton.