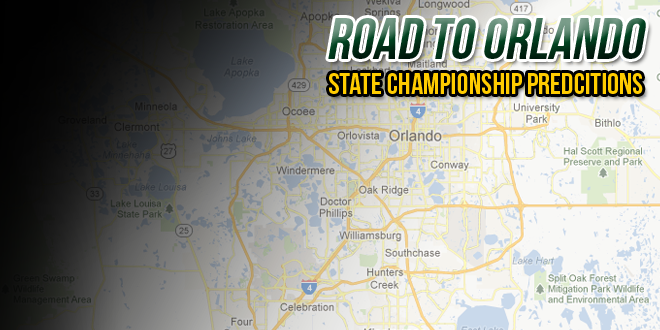 The Second Season is here upon us and I will take a look at the picks I have made for the state championship games coming down the line in a few weeks. Got your own picks? Share them below in the comments section or tweet them to me on Twitter at @FlaHSFootball.

CLASS 8A
First Coast vs. Flanagan
We really like what First Coast has done this year despite a few questionable areas in a couple of games where things appeared tight. However, the Buccaneers are a team really driven for success and First Coast QB De’Andre Johnson wants nothing more to cap his career the way he started it: playing for a state championship. Flanagan pick comes down to simple dominance. Coach Bush has turned this team from being doldrums to being one you really don’t want to see at all. The Falcons are athletic just like First Coast has been the last few years and this kind of match up could set the state for a barn burner like the 2012 Class 8A Final between Apopka and Cypress Bay.

CLASS 7A
St. Thomas Aquinas vs. Niceville
Still taking Niceville here despite dropping the game last week against Bolles. Usually long bus trips for teams from the Panhandle don’t fair well, but it was Week 11 and it is a good chance some of the starters didn’t fully play to save for the start of the playoffs. St. Thomas Aquinas has been our pick for the south part of the 7A bracket since the preseason and we see no reason to change it. The challenge to get to Orlando may have gotten easier though for St. Thomas Aquinas as there is no Dwyer lurking around in the Class 7A bracket this season.

CLASS 6A
Venice vs. Mainland
I can hear the screaming now coming from TONS of fans, but you know what, this is the likely pick that will get mud thrown at me, but I am sticking to it. Venice has shown some strong dominance in games this year and say all you want they lost 10-0 to Manatee, but that is a rivalry game and it seriously goes back and forth. Also to think about it, Venice didn’t let those 10 points happen until the 4th quarter, so some of that tips to Venice in being able to keep the other team away. Mainland is another team that has posted five shutouts this season and although they might not do that again in the playoffs, their chances of making the run seem to be very favorable now. I will say it: I am not sold on Armwood and I am concerned about Miami Central, especially with the fact of just HOW CLOSE they about dropped a district game to Miami Carol City this year…that one is still raising a red flag that I seriously would like to see go down.

CLASS 4A
Bolles vs. Booker T. Washington
REMATCH! I expect for the fourth year in a row that Bolles and Booker T. Washington will face each other in the Class 4A state championship. No where in the history of the FHSAA State Football Finals has the two same teams met four years in a row for a state championship, let alone it be in the same classification. What is their to write about why we see this happening? We know how the brackets have looked year in and year out and it is pretty much the same now. I don’t think I have to write much more on why this will happen once again.

CLASS 2A
Victory Christian vs. Indian Rocks Christian
This game would likely draw out a TON of fans for both small schools that could result in the biggest Class 2A crowd we have seen in a while. Both teams have clicked on all cylinders and both have players that can really dominated with effort. Indian Rocks gets a lot of credit for beating a 3A Tampa Catholic team that has been good in recent years, while Victory Christian head coach Tommy Lewis really has righted the ship of a program that is knowing to be a consistent winner.

CLASS 1A
Dixie County vs. South Walton
This would be an epic Class 1A state championship showdown. Dixie County is undefeated going into the playoffs for the second straight season and it looks this Dixie County team is even better than last year’s team. South Walton has a legitimate passing threat and is the only team in Class 1A that seems to throw the ball more than run the ball and why not have them playing for the first state title ever this year? They have already beaten Blountstown this year and got a huge win over previously undefeated Baker on the road last week. Their chances are very high now.