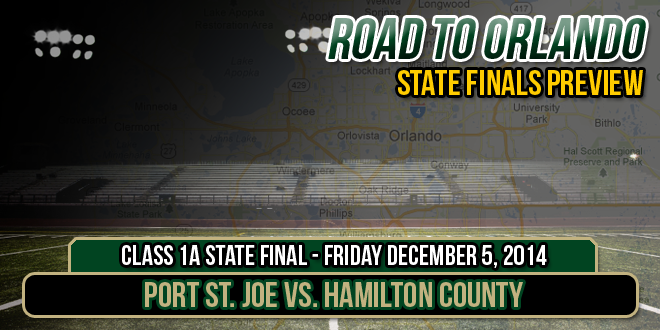 How They Got Here
As a district runner-up, Port St. Joe had to march through the playoffs with at least two road games in the regional bracket. First up on was South Walton in the regional semifinals, where they managed to stifile a very strong offense lead by Jonathan Ortner and pulled out a 37-14 win in Santa Rosa Beach. The next road trip took Port St. Joe to Blountstown for the regional finals, where the Tiger Sharks got in a serious defensive battle with the Tigers and scored the only points in the fourth quarter of that game for a 6-0 win. Finally coming home for the state semifinals, Port. St. Joe put all the stops on a strong Vernon team, shutting out the Yellow Jackets, 35-0.

A Look Inside Port St. Joe
It’s not much of a secret that Port St. Joe is going to run the ball. The Tiger Sharks have rushed for over 3,700 yards on 521 carries with 48 touchdowns and have three running backs over 499 yards rushing, led by Davis. Port St. Joe quarterback T.J. Williams has completed only 31 passes all season, but 10 of those are for touchdowns. In the win over Vernon, Davis and Cole Cryderman both ran for two touchdowns and combined for 198 yards on the ground and the Sharks’ defense was dominant in posting the shutout. Palmer credits Port St. Joe’s trip to the state championship game in his first year back to the previous coaching staff. Cryderman is a threat in all three phases for Port St. Joe, leading the defense with 105 tackles and is also 5 for 7 on field goals and 36-for-46 on extra points. Alvin Dempsey leads the Port St. Joe defense with six QB sacks.

Quotabale
“The atmosphere is euphoric right now. There are plenty of people who are happy and proud and it’s just a great time up here in Port St. Joe this week. You have to give credit to the previous staff before I came back for having these players ready. We haven’t had any problems with getting these kids ready to go or having them buy into our system.” – Port St. Joe Head Coach John Palmer said about Port St. Joe playing in the Class 1A State Championship.

How They Got Here
Hamilton County has taken on a road warrior mentality here in the playoffs and has just started to peak at the right time as a team. The Trojans which played at home in the first round, defeated Hilliard easliy, 34-21. The following week, knowing the tough task at hand of playing the defending Class 1A state champion, the Trenton Tigers. Hamilton County pulled the shocking upset of the playoffs by knocking out the Tigers 45-20 in the regional finals. Having to yet go on the road again, the Trojans faced off with Dixie County for the second time this season. The Trojans which lost the first meeting up in Jasper, weren’t given many chances to win against the #1 ranked team according to the Associated Press. However, the right plays were made on all sides of the ball by Hamilton County, sealing an 18-12 win in Cross City to send Hamilton County to the Class 1A state championship.

A Look Inside Hamilton County
Looking at the Trojans they one of your traditional small public school teams that will run the ball more than passing the ball. The Trojans have rushed for 2,134 yards this season, compared to just 1,248 yards passing. Kentwan Daniels is a dual-threat quarterback who can throw or run the ball and leads the team in both passing and rushing so far to date. Daniels has 868 yards passing with 7 touchdowns so far this season and only three interceptions, but has ran the ball for 952 yards for 14 touchdowns on 144 carries. The other big name on offense to really watch for with the Trojans is Mr. Do Everything, Lamarcus Webb. Webb who can play at variety of positions and who runs a 4.4 in the 40-yard dash, has piled up numerous amount of stats in different categories this year, but the areas to watch out for him are in the run game and passing game as well as on defense. Otherwise, Hamilton County will spread the ball around to a variety of players to get points on the board. On defense, keep an eye on Deangelo Robinson, who leads the team in sacks with 13 and Ethan Land who is behind Robinson with eight sacks so far.

Quotabale
“We have a good group of seniors and juniors that have really bought in. There is only so much we as coaches can do, but this group of players has really stepped up and made our job very easy. They (Port St. Joe) have one running back who has rushed for over 2,000 yards, and a couple of others who aren’t too shabby. I played them when I was in high school (at Jefferson County) and they have a great tradition and always play tough.” – Hamilton County Head Coach Blair Armstrong in regards to his team playing Port St. Joe on Friday night for the Class 1A State Championship

Game Outlook
We like what both teams bring to the table when you want to compare two great small school football teams. Both teams have worked hard to get here and both have proven a lot to fans and the media who have not had them ranked in the final Class 1A poll this season. Both teams also show why Class 1A is something the FHSAA will keep as a classification for a long time, and there are indications that growth of Class 1A will continue into the next reclassification cycle. It is truly hard to make a prediction for a team for this game considering that both teams are truly worthy of winning the state championship. Expect the score to be close in this one, but we think Hamilton County might just be peaking at the right time.