Home Opinion Wilson Commentary: Tallahassee wanting to throw the FHSAA into the ringer is... 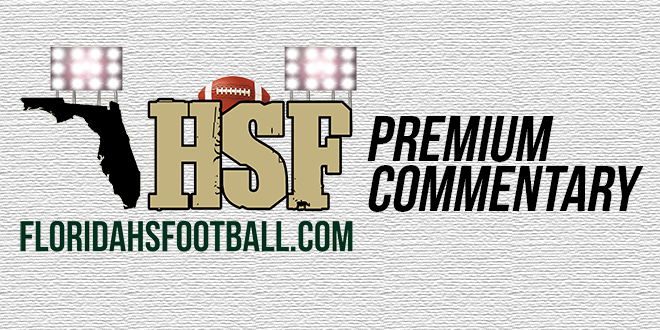 The same story line is repeating itself once again, one we have all grown to be familiar with on yearly basis involving our state legislatures and the Florida High School Athletic Association.

However, 2015 is not even over yet and bills are already being filled for the 2016 session including one ready to throw the FHSAA into the ringer, so-to-speak.

Ross Spano R-Dover, who represents District 59 in the Florida House of Representatives has filed House Bill 31 with basically where several bills from the 2015 legislative session left off at.

My question for Spano is what is so important to overhauling the FHSAA?

Of course, I am sure I will email his office and get no reply like I got from another Representative regarding another bill from the 2015 session.

But, seriously, why the continued attacks on the FHSAA?

I am at a loss here.

Yes, I don’t agree with every single thing the FHSAA does. No one ever will agree to everything, but the change the landscape of high school sports is not what is needed. The focus needs to be on education instead, but we have thrown that out idea out to the dogs.

Basically, House Bill 31 deals with wanting to give the school the option to join the FHSAA either as full-time members or on a per sport basis. That right there could lead to many issues, especially if associations follow different rules for sports and how they handle eligibility.

However, looking at this bill, I don’t expect it to be the last bill to be filled to overhaul the FHSAA, but if this particular bill is to become law, it will dramatically reshape how high school athletics in this state are conducted including which teams decided the FHSAA is not worth their time for select sports. Either everyone should be playing by the rules or go elsewhere, but don’t be playing by the rules for one sport and not the other.

Either way in the end of all of this, Tallahassee is heading down the wrong path as they have been with other issues that are already bringing them back another special session later this year.