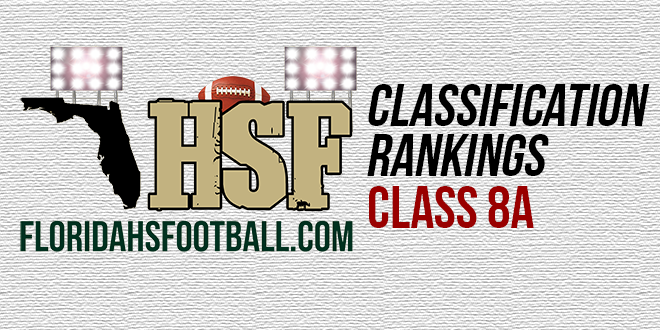 Here are the Class 8A Preseason Rankings from FloridaHSFootball.com

1. Flanagan: This is the strongest team in Class 8A coming out of the gate. After finishing with a 13-1 record and their first trip to the playoffs, and state semifinals, the Falcons are back stronger than ever this season. They will be the top team in District 8A-12 and could face Columbus for the rights to go to Orlando once again this season.

2. Apopka: Same gun, new bullets at Apopka. Team returns two of three 1,000 yards rushers, but will having to fill in big shoes with the departures of Martez Ivey and Chandler Cox due to graduation. Finished last season as the Class 8A state champion with an overall record of 11-4.

3. Osceola (Kissimmee): Kowboys move up from Class 7A to Class 8A this year after falling to St. Thomas Aquinas in the Class 7A state championship game. The Kowboys will be powerful on offense with several workhorse running backs leading the way. The defense will have to replace several key linebackers and as such the offense will be starting ahead of the defense this year. Osceola finished with a 13-2 record last season.

4. Columbus: By far the best Class 8A team in Miami-Dade County. The Explorers aren’t known for brand name talent, but the talent they do have are just a great producers, if not better than some of the other teams. Finished as the Class 8A state runner-up last year with a record of 13-2.

5. Dr. Phillips: This year’s Dr. Phillips team will be a bit younger, but talent is surrounding this program big time. However, the Panthers might find it hard to match the 12-1 record from last year as the schedule has increseas in strength greatly compared to the last two years.

6. Manatee: The demise of the Hurricanes, has been pretty much unfounded for the most part. The Hurricanes will have a lot of key players back from last season, but the question mark will be to see how the Hurricanes fair without leading running back Johnnie Lang while pending legal issues are still on going. Will open the 2015 season at Hoover, LA. Finished with a 12-2 record last season, falling to eventual state champion, Apopka in the state semifinals.

7. West Orange: The Warriors return quite a bit of talent from an 11-1 team that reached the regional semifinals for the first time in school history. Woody Barrett and Eddie McDoom are two players that West Orange will be calling upon and will contend with Apopka in District 8A-4 for the two playoff spots.

8. Vero Beach: The Indians are coming off an 11-1 season after getting bounced out of the playoffs by Manatee in the regional quarterfinals last season. Patrick Bethel and MJ McGriff will be the two biggest names returning for the Indians and will contend with Fort Piece Central for the two playoff spots from District 8A-8.

9. South Dade: Unable to defend their Class 8A state championship last year, the Buccaneers are on a rebound this season with quite a few transfers added on to the team during the off season as well. With plenty of starters back, this team should easily contend with Miami Southridge and Miami Killian for the two playoff spots from District 8A-16. South Dade finished with an overall record of 7-3 last year.

10. Lake Mary: There will be some rebuilding of the Rams in certain areas, like the offensive line after finishing the last two seasons with a 11-1 records. Will easily be a district title contender and will battle with Orange City University, Oviedo and Lake Brantley for the two playoff spots from District 8A-2.