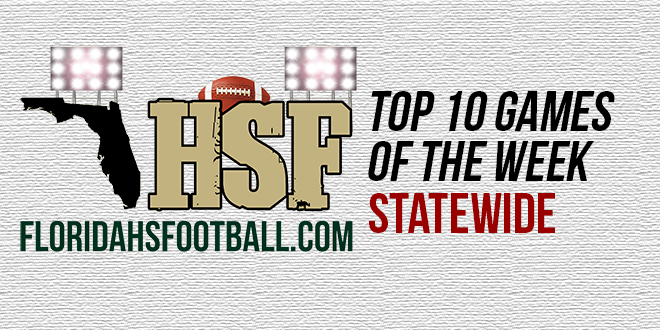 Here is a look at our Top 10 Games of the Week for Week 5 with predictions from Joe Pinkos, USA TODAY HSS and FloridaHSFootball.com

Escambia (3-1) at Columbia (4-0)
Comment: Some felt Columbia would be down this season, but that has proven to be further from the truth at this point. Some even felt Escambia would be down, but despite the loss to Jesuit, La., last week, that has not been the case either. The biggest problem for Escambia in this one will be the travel time and having to cross the timezone line in making the trip from Pensacola to Lake City that could tip the game fully into Columbia’s favor.
Joe Pinkos Prediction: Columbia 6 over Escambia
USA TODAY HSS Prediction: Escambia 35, Columbia 28
FHSF Prediction: Columbia

Vanguard (3-1) vs. Buchholz (3-1) at Citizen’s Field, Gainesville
Comment: Both teams have seen considerable improvement, something that was not sure if that could happen at this point in the season when we look back before the start of the season. Vanguard has gotten off to a quick 3-1 start and the one loss to North Marion was a a closer game than some expected. Buchholz is on an emotional high right now after getting a big upset win over Oakleaf last week and that certainly could play a factor of how the game plays out this week.
Joe Pinkos Prediction: Buchholz 1 over Vanguard
USA TODAY HSS Prediction: Vanguard 30, Buchholz 27
FHSF Prediction: Buchholz

Plant (3-1) at Armwood (3-0)
Comment: This rivalry returns to the regular season slate after being off the schedule for two seasons due to the districts both teams were in the past two years. However, a lot think Plant is down and that could play a big factor of how close the game is with Armwood. No matter what though, this is one game fans are excited to see this week in the Tampa Bay-area.
Joe Pinkos Prediction: Armwood 18 over Plant
USA TODAY HSS Prediction: Armwood 28, Plant 14
FHSF Prediction: Armwood