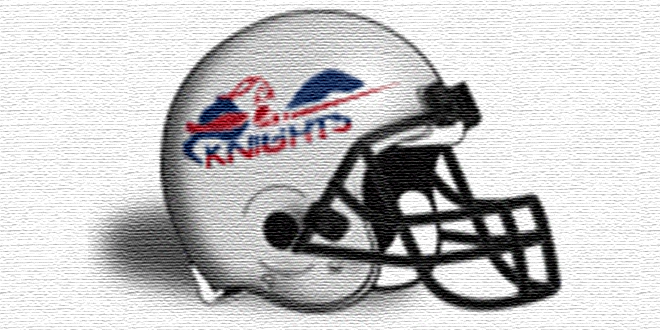 GAINESVILLE – It was known earlier in the week that the six-week suspension of three Gainesville athletes including senior quarterback and punter Caelen Christian would have an impact on the Hurrricanes on Thursday night.

Little it was known that the impact would be huge on a night, with the Hurricanes knowing that a win would clinch the District 6A-5 championship, one that would see the Vanguard Knights (5-2, 2-0), win by a score of 43-17.

The younger Matthews, who was just recently playing on the Hurricanes junior varsity team a few weeks ago, found it to be a pretty tough outing for most of the night, but did show some promising signs of a quarterback that should be on the rise.

On the first drive, Matthews appeared to be getting thing going as he completed a 13-yard pass from the Hurricanes 27-yard line on the second play of the drive for a first down. However, Matthews was having to chase Vanguard defenders a few plays later as Emanuel Tuggerson intercepted Matthews pass setting up the Knights in great field position for their first drive.

It only took three plays for Vanguard junior quarterback and recent University of Miami commit N’Kosi Perry to capitalize on the turnover as he threw a 47-yard pass to Moses Menchan to give the Knights a 6-0 lead with 7:38 left in the first quarter.

With it still early Gainesville got the ball back for their second possession and found more success going to the game as they were able to drive down to the Vanguard two-yard line. However, with the Knights defense backed up to the end zone, the Hurricanes ended up settling for a 20-yard FG from Adam Cerlanek to cut Vanguard’s lead to 6-3 with just under two minutes left in the first quarter.

In the pursuing possession for Vanguard, the Knights found it a bit tougher to move the ball on the Gainesville defense only gaining one first down before being forced to punt and giving the Hurricanes the ball back.

But it wouldn’t take long fo Gainesville to give it right back.

After gaining two first downs in what looked like could be a promising drive, the Knights defense was able to shut things down for the Hurricanes. However, on the snap to punt the ball, Von Smith who took over punting duties due to Christian’s suspension, fumbled the snap with Vanguard recovering at the Gainesville 25-yard line.

With field position look solid, the Knights would capitalize once again on a Gainesville turnover quickly as Perry ran in the score from 9-yards out to give Vanguard a 12-3 lead.

Vanguard once again got the ball after a quick Gainesville three and out in the middle of the second quarter, the Knights looked to capitalize again.

Backed up with a first down and needing 30 yards for the first down, Perry once again let his arm strength showed, completing 53-yard touchdown pass to Darryn Lake to give Vanguard a 20-3 lead, a lead the Knights would take with them into halftime despite Gainesville missing 42-yard field near the end of the half.

Coming out for the start of the second half and Vanguard getting the ball, the Knights looked shaky as the Gainesville defense managed to force a quick three and out on the Knights offense.

Once again with Perry under center, lead Vanguard once again on another scoring drive, one that would open some breathing room as he completed a 3-yard touchdown pass to Lake once again giving the Knights a 28-3 edge with 3:37 left in the third quarter.

However, that edge would be short-lived.

On the ensuing kickoff, Vanguard, which was without its regular kicker, squib kicked the ball allowing Gaineville’s Trey Covert to scoop the ball up at their own 45-yard line and took back for a 55-yard touchdown cutting the lead down to 28-13 with 3:29 left.

And if you wanted more shock, you got it.

Quickly as Vanguard got the ball back gave the ball away two times within a stretch of just two minutes late in the third quarter. The second fumble ended up being a golden opportunity for Gainesville though.

With the ball placed at the one-yard line after recovering the second Vanguard fumble, the Hurricanes were able to cash in on a 1-yard touchdown run by senior running back Keomis Morris to make the score 28-17 with 11:13 left in the game.

But anymore golden opportunities for the Hurricanes to make a comeback were dashed after that touchdown.

After forcing Vanguard to go three and out on the next drive which would have given the Hurricanes the ball back and plenty of time on the clock, end up roughing the punter on the punt, giving the Knights a first down and the ball back. After that Perry was able to lead the Knights right down the field again, but eventually turned it over on downs at the Gainesville 25 with 6:08 remaining.

And as quickly as Gainesville got the ball back, they couldn’t capitalize going a quick three and out and again giving the ball back to the Knights.

The Knights though were not done with the scoring, yet.

With 2:22 left in the game, Perry connected with Menchan once again to increase the lead to 36-17 in favor of the Knights.

Gainesville got the ball back once again looking to get some points to at least make the game respectable with not much time left. With Luke Matthews getting one more chance to drive Gainesville down the field, he quickly found the ball going the other way with Vanguard’s Dabarre Jenkins taking it to the end zone for a pick-six touchdown and increasing the lead to 43-17 with 49 seconds left.

With the victory in hand, Vanguard head coach Edwin Farmer couldn’t contain his excitement, but said the game plan didn’t change as result of the suspensions Gainesville had.

“We didn’t change the game plan. We stayed focused. We know that Coach Mark [Latsko] would coach his guys up and be ready to play. That didn’t change what we did defensively at all,” Farmer said.

The celebration will be short for the Knights as they will get ready to host rival Lake Weir in another critical District 6A-5 contest next week.