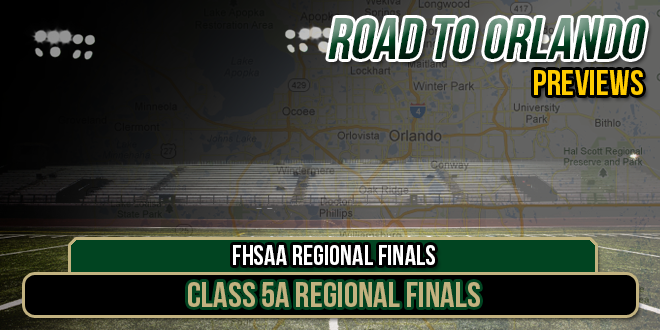 FloridaHSFootball.com breaks down tonight’s Class 5A regional finals with the final eight teams remaining to contend for four spots to next week’s state semifinals. Included is our predictions from Publisher Joshua Wilson and Senior Writer Corey Davis as well as Joe Pinkos’ prediction.

Suwannee (9-2) at Wakulla (11-1)
The road: Wakulla def. Bay 21-16 and Rickards 34-19; Suwannee def. BK 34-7 and Ribault 26-20
Skinny: This isn’t the team you saw back in August on ESPN against Spartanburg, SC; since that loss the War Eagles have run off 11 straight wins and are one win away from a state semi-final appearance. Offensively, the Eagles are led by 5 star quarterback Felipe Franks (2, 125 yards, 28 TDs), tailback Demarcus Lindsey (951 yards, 7 TDs), receivers Keith Gavin (676 yards, 11 TDs), Kelton Donaldson (423 yards, 5 TDs) and Justin Davis (439, 4 TDs) and averaged 40 points a game during the regular season. Suwannee started and closed the regular season the same way with a pair of losses a walk off kick loss to Leon and a shocking blow out loss to arch-rival Columbia, in between was seven straight wins and another district title playoff appearance. The lethal duo of Steven Anderson and Aaron Mcallister has constantly killed team through out the season, the two will need to come up big again to carry the Bulldogs back to the state semi-finals.
Joe Pinkos Line: Suwannee 1 over Wakulla
FHSF Predictions
Joshua Wilson: Wakulla 30, Suwannee 24
Corey Davis: Wakulla 28, Suwannee 20

POLL: Who will win the 5A Regional Final between #Suwannee & @WakullaFootball on Friday? #flhsfb

Nature Coast (12-0) at Clay (9-3)
The road: Clay def. Eastside 44-0 and North Marion 65-58; Nature Coast def. Zephyrhills 42-13 and River Ridge 42-33
Skinny: By far the most intriguing game in the state if you ask me, how many other games features two of the states best tailbacks. Three weeks into the season, the Clay offense was still trying to find an identity scoring 6 points in three weeks, a good part of that was that senior tailback Bilal Ally was coming off a torn ACL injury and was likely a little timid at first. By Week 4 Ally started getting a little more comfortable, the results speak for themselves as the Blue Devils closed out the regular season with wins in 7 of their last 8 games. Ally (2, 448 yards, 32 TDs) has carried the team on his back especially come playoff time accumulating a state record 496 yards and 6 touchdowns in last week’s shocking win over North Marion. As good as those numbers are, he won’t even be the best tailback on the field Friday night, as on the other side of the field will be Deshawn Smith, who leads the state with 3,555 yards and 58 touchdowns. Smith lines up in the wildcat every snap and takes the direct snap every play behind the offensive line and several fullbacks, through 12 games nobody has been able to stop Smith. Something Clay coaches have been looking forward to all week trying to figure out especially after giving up 58 points last week and twice giving up 35 points during the regular season.
Joe Pinkos Line: Nature Coast 7 over Clay
FHSF Predictions
Joshua Wilson: Clay 56, Nature Coast 50
Corey Davis: Clay 42, Nature Coast 35

Dunbar (9-2) at Jesuit (12-0)
The road: Jesuit def. Gibbs 45-44 and Jeferson 38-7; Dunbar def. Southeast 16-2 and Immokalee 49-3
Skinny: For the third time in the last 5 years, Jesuit finds itself in the Elite 8, still seeking its first state semi-final appearance, last year it was one point loss to Bishop Moore which kept the Tigers from going to the Final Four. Is this the year, the Tigers take that next step. Likely so as the Tigers defense has only allowed 8 points or less in 7 of the 12 games, including posting four shutouts to go along with 65 sacks and 15 interceptions. Junior quarterback Daniel Boone (1,438 yards, 15 TDs) directs the offense along with junior tailback Malik Davis (2, 038 yards, 26 TDs). After a two year absense, the Dunbar Tigers are not only back in the playoffs again but in the midst of the programs longest playoff run. Sophomore tailback Abraham Alce (1, 257 yards, 13 TDs) leads the Dunbar offense that has a nearly 4 to 1 ratio in rushing to passing.
Joe Pinkos Line: Jesuit by 24
FHSF Predictions
Joshua Wilson: Jesuit 38, Dunbar 10
Corey Davis: Jesuit 42, Dunbar 14

POLL: Who will win the 5A Regional Final between #Hallandale & @BMooreAthletics on Friday? #flhsfb