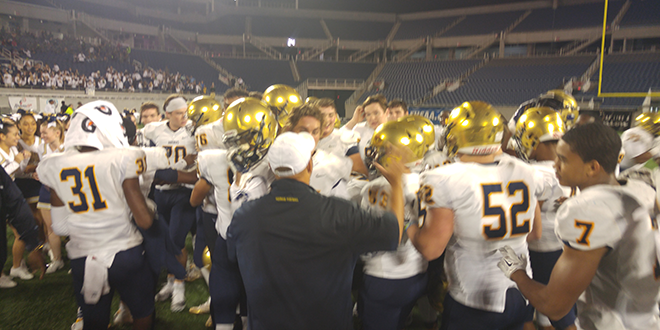 ORLANDO – The 7A State Championship Game was really never in doubt Friday night at the Citrus Bowl in Orlando. It was all Fort Lauderdale St. Thomas Aquinas, all the time.

St. Thomas Aquinas (13-1) took a 21-0 lead after the first quarter and had a running clock from the middle of the third quarter on as the Raiders repeated as 7A state champions, 45-10 over Viera.

It was dominating for St. Thomas Aquinas from the beginning. After punting on their first possession, the Raiders forced a short Viera (10-5) punt and took over at the Hawks 39 yard line. From there, St. Thomas Aquinas quarterback Jake Allen found wide receiver Sam Bruce wide open over the middle for a 30 yard touchdown strike that put the Raiders up 7-0.

Another Viera three-and-out on the next drive led to another short punt, plus a kick-catch interference on the Hawks started St. Thomas Aquinas on the Viera 37. From there it was five plays to the end zone and Jaxson Kincaide finished it off with the first of his two touchdown runs, this one from two yards out, to extend St. Thomas Aquinas lead to 14-0. On the ensuing drive, Viera did pick up a couple of first downs but had to punt it away again. This time Kincaide had a 56 yard run which set up James Charles for a 3 yard score and the Raiders had a 21-0 lead at the end of the first quarter.

St. Thomas Aquinas fumbled on its first possession of the second half, but then forced an interception from Viera quarterback Hayden Kingston at the Hawks 17 yard line on the next drive. Charles finished off the short drive with a 1 yard run to make it 35-3 for the Raiders. St. Thomas Aquinas then made it to the running clock on the very next drive as Adetutu Daranijo picked off Kingston and took it back 12 yards for the only defensive score of the night and putting the Raiders up 42-3.

Viera, who was making its first appearance in the state championship game and had never won a playoff game before this season, finally got in the end zone in the final minute on a 1 yard run by Malek Folston.

Allen finished 11-of-14 passing for 152 yards with 1 touchdown and 2 interceptions for St. Thomas Aquinas. Kincaide gained 119 yards on only 12 carries with 2 touchdowns, with Charles adding 71 yards on 12 carries and another 2 scores. Bruce led the Raiders receiving corps with 5 catches for 61 yards and a score, and Trevon Grimes chipped in 3 catches for 70 yards. The Raiders defense also force three turnovers, all interceptions.

The title was the ninth in school history for St. Thomas Aquinas, putting them in second place all-time in FHSAA Football Finals behind Jacksonville Bolles, who leads the way with 11 state championships.