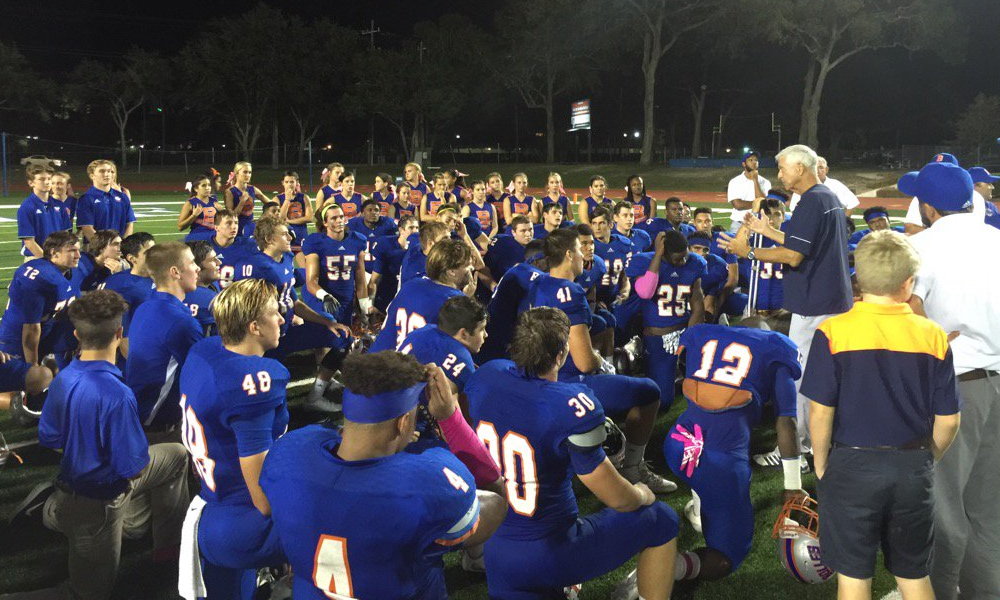 Here is our Class 4A Regional Final preview capsules for Class 4A, along with predictions from Joe Pinkos and FloridaHSFootball.com.

Raines (7-2) at Bolles (10-0)
Kickoff:Friday, 7:30 p.m. EST
Where: Skinner-Barco Stadium, Jacksonville
Skinny: A rematch of Week 10’s District 4A-2 championship contest between the two Jacksonville schools will certainly draw a big crowd. Bolles won that meeting 24-23 and this meeting will certainly be no different once again. Bolles took care of business at home last week against East Gadsden, shutting out the Jaguars 40-0. The Vikings took care of business on the road, defeating District 4A-1 champion Walton, 52-14 last Thursday night. Keep an eye on QB Mac Jones for Bolles as he is a weapon for the Bulldogs both through the air while RBs Amari Terry and EJ Porter will mix it up on the ground. For Raines watch out for QB Ivory Durham who scored three total touchdowns last week in the win over Walton and has plenty of options at receiver to throw the ball to.
Pinkos Prediction: Bolles by 14
FloridaHSFootball.com Prediction: Bolles 28, Raines 20

Dunnellon (9-1) at South Sumter (9-1)
Kickoff:Friday, 7:30 p.m. EST
Where: Inman Sherman Field, Bushnell
Skinny: Like all the Class 4A regional final games this week, all of them are rematches of the regular season as half the districts got wiped off the bracket. Looking at the best matchup in this group of games, this one stands out the best. Both teams are fierce competitors and could be true that both don’t care for each other that much. That is what makes this game so great. Looking back to when the team’s last met on Oct. 21 for the District 4A-4 championship, it was a tight battle with South Sumter extracting revenge for last year’s lost, 21-15. However, forget all of that because that result doesn’t matter. What matters now is the fact this is for a birth in next week’s state semifinal. Keep an eye on Dunnellon senior QB Layne Sanderson who was highly productive in last week’s 48-21 win over Bradford. For South Sumter keep a watch on QB Malik Bell and RB Deon Williams as two of the biggest weapons that could score points for the host Raiders who bested Santa Fe last week, 42-18.
Pinkos Prediction: South Sumter by 7
FloridaHSFootball.com Prediction: South Sumter 27, Dunnellon 24

Jones (9-1) at Cocoa (8-1)
Kickoff:Friday, 7:30 p.m. EST
Where: Tiger Stadium, Cocoa
Skinny: When these teams first met just over a month ago, the result was not as pretty as one would have expected. What many thought would be a very close matchup for the District 4A-5 championship, it turned into a one-sided affair with Cocoa coming out on top 41-6. Now with the rematch in order, things could be different this time around or they might not be different. It all depends on how you look at the matchup at hand. For Cocoa, the host Tigers have plenty of weapons to go with on the field and that includes QB Bruce Judson who has produced nearly 1,500 yards of offense so far this season. Judson is a dual-threat and can make you pay on the ground or through the air. Cocoa defeated Bishop Verot 64-0 on Friday night. Keep an eye on Austin Perry on the defense for Jones who made Avon Park pay early in the game as well as QB Quadry Jones who has a few targets to get the ball to through the air and on the ground. Jones defeated Avon Park 27-16.
Pinkos Prediction: Cocoa by 17
FloridaHSFootball.com Prediction: Cocoa 35, Jones 20