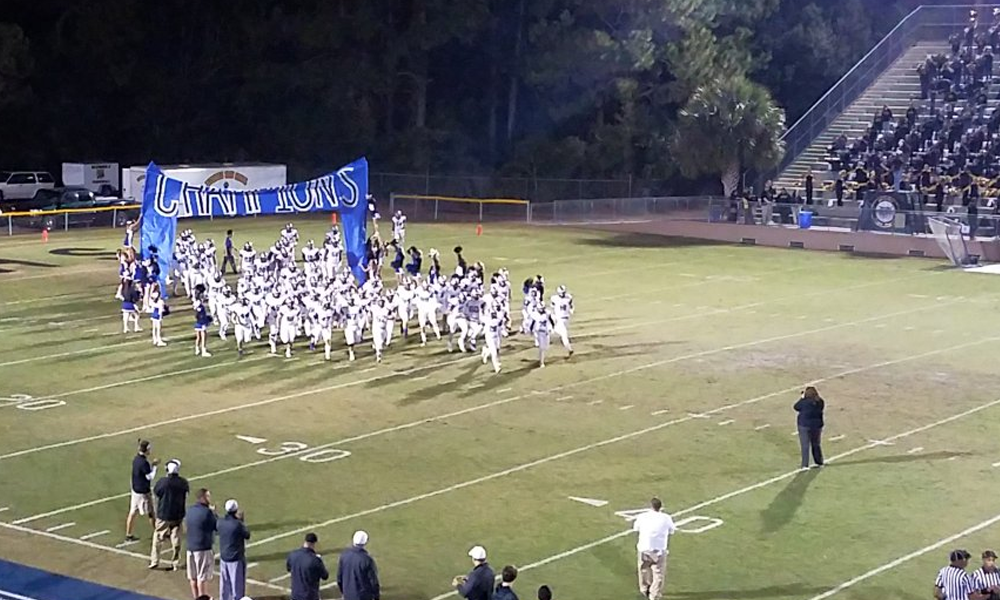 GAINESVILLE, Fla. – What was thought to be a close second round playoff rematch between the visiting Bartram Trail Bears and the Buchholz Bobcats turned into a one-sided affair for the Bears.

With a balanced offensive attack and a strong defensive push by the Bears lead to them pitching a 27-0 shutout win over the host Bobcats.

THE INFO: Things got started quickly with Buchholz showing promise on their first drive, but ended up punting the ball to Bartram Trail early in the first quarter.

However, it wouldn’t be long before Bartram Trail would find the end zone – three plays to be exact. That is when Riley Smith found receiver Gunnar Hitzeman for an 86-yard touchdown pass with 8:05 left in the first quarter to take a 7-0 lead.

Buchholz, with their second drive, didn’t see things go much better as they got down the field some but ended up punting the ball back to the Bears once again.

With the ball back, Bartram Trail made good on their second drive as quarterback Joey Gateway orchestrated a 75-yard drive that resulted in Gatewood’s ½-yard keeper to put the Bears up 14-0 over the Bobcats with 1:49 left in the first quarter.

It wouldn’t last long though for the Bobcats as quarterback Camden Orth threw the first of three interceptions of the night when Josh Follenweider grabbed the ball at Buchholz 45 with 1:24 left in the first quarter.

Bartram Trail managed to move the ball some after the takeaway but ended up trying for a 42-yard field goal that sailed wide left as the second quarter opened up.

With the ball back Buchholz found themselves in trouble again as Orth was once again by the Bartram Trail defender, this time linebacker Andrew Mims. Bartram Trail at the Buchholz 15.

After gaining a first down, Buchholz defense tightened up and the Bears settled for an easy 18-yard field goal with 8:30 to go in the second quarter.

With another chance of a drive to put something together, Buchholz once again found themselves on the wrong side of the ball as Orth was intercepted again for the third time of the night with Follenweider getting his second interception of the night with just over five minutes left in the second quarter.

As such, Bartram Trail ran the clock out the Bears hit an 18-yard field goal to take a 20-0.

The third quarter saw no scoring by either team. However, Buchholz managed to get an interception by Luke Whittemore at their own two-yard line but managed to get nowhere with the turnover.

Joey Gatewood scored one final touchdown with nearly two-minutes left in the game to seal the deal for good with a 27-0 win over their District 7A-3 rival.

KEY PLAY OF THE GAME: Joey Gatewood’s 86-yard touchdown pass to Gunnar Hitzeman on Bartram Trail’s first drive set the tone for the shutout to be pitched by the Bears.

DID YOU KNOW: This was the sixth time the teams have met over the last four seasons including the fourth time in the last two seasons. Bartram Trail has won the playoff rematch in consecutive years to advance to the regional final.