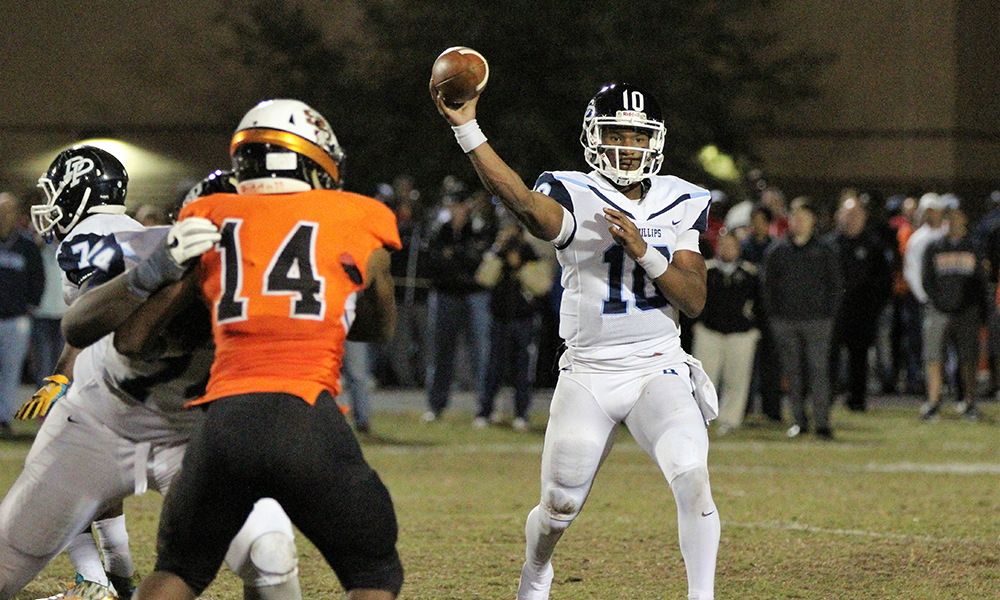 ORLANDO, Fla. — For just the second time in program history, the Dr. Phillips Panthers are headed to the FHSAA State Championship game. The full regulation time wasn’t enough to determine a winner Friday night between Dr. Phillips and Seminole Sanford as  the Panthers escaped in double overtime, 37-34. Thanks to missed field goals and a pick-six by DJ Charles to start the second half, Dr. Phillips was  able to upset the Noles on the road and hand Seminole their first loss of the season.

THE INFO: The Noles struck first as quarterback Kaylan Wiggins found tight end Brenden Blyseth for a 21-yard touchdown pass. Minutes later, Seminole was back on offense but was forced to punt as the Panthers’ defense settled into the game. With nearly two minutes remaining in the first quarter, Dr. Phillips junior Tanner Ingle returned the punt 62 yards to the back of the end zone. The Panthers would miss the extra point so Seminole led 7-6 after the first quarter.

Dr. Phillips took their first lead of the game midway through the second quarter. After converting 3rd and one on the Noles’ 24-yard line, Kenny Palmer broke free for the Panthers and scored. With 6:20 left in the first half, the Panthers led 13-7. However, Seminole responded; and they did so quickly.

Aaron Edmunds ran the ball twice to start the drive. Wiggins was brought down on the Panthers’ 39-yard line after a 10-yard quarterback rush. The very next play, the senior found UCF commit Gabriel Davis over the top of the field. Davis caught the ball and brought the defender with him as he scored the 39-yard touchdown.

The Noles then executed a perfect onsides kick. Nearly 12 seconds after scoring, Wiggins stepped back onto the field and connected with Davis once again. This time for 31-yards as Seminole led 21-13 with 3:45 remaining in the first half. The Noles’ kicker Payton Rivers nailed a 38-yard field goal as time expired in the first half giving Seminole the momentum and a 24-13 lead over Dr. Phillips at halftime.

The defense of Dr. Phillips would respond in the second half. The Panthers scored their 11th defensive touchdown of the season when FAU commit DJ Charles picked off Wiggins on the first drive of the second half. Charles returned the ball 34-yard for the score giving life to his team.

Dr. Phillips then forced a Seminole three-and-out on the next possession. The punt set the Panthers up at the 50-yard line and a few players later quarterback Marvin Washington let the ball fly connecting with Emare Hogan for the 34-yard touchdown pass. The Panthers had their second lead of the game, 27-24 with just less than seven minutes remaining in the third quarter.

Seminole tied the score for the final time in regulation inside the final minute of the third quarter thanks to Rivers who sent a short field goal, taken from inside the 20-yard line, through the uprights. A late drive in the 4th quarter by Seminole set up Rivers again for the potential game-winning walk-off field goal. Rivers kick had the distance but sailed wide left. Seminole and Dr. Phillips were headed into overtime as the fans were going crazy in the stands.

On the first play of overtime, Wiggins ran the ball in himself from 10-yards out. Emare Hogan quickly responded for a 10-yard rushing touchdown of his own sending the game into a second overtime tied at 34 apiece. The Panthers offense started the second overtime and was held to only a field goal giving Seminole a chance to win the game trailing 37-34.

KEY PLAY OF THE GAME: A touchdown would have won the game. However, the Panthers defense had one final goal-line stand in them keeping Wiggins out of the end zone. Rivers was sent back onto the field to send the game into triple overtime. However, that wouldn’t be the case. The ball hit the left upright and bounced back onto the field. The 24-yard field goal was no good and Dr. Phillips won the game shocking the Seminole fans.

DID YOU KNOW: This is Dr. Phillips send time in program history in the state final game as the Panthers reached the title game 6 years ago in 2010. However, in 2010 the Panther lost to Miami Central and due to an ineligible player, all wins from the season were later vacated by the FHSAA. This time around, head coach Rodney Wells and company look for redemption and shot at the school’s first ever football state championship.

QUOTABLE: “It just a series of emotions. It has been an emotional week. Just to see these seniors advance and win that close game, because they’ve been on the other end of those one point and two point losses, it’s just so great to see them consistently work hard and get a chance to play for a state title. Hopefully, this just shows that we can overcome anything. They (Seminole) had a big swing when they got the onside kick then went up and we were down 11 or 12 points at halftime. So we could have gone in at half and tucked our heads but again it’s all about the seniors. It’s the best game we’ve ever played and one of the best I’ve been a part of,” said Dr. Phillips head coach Rodney Wells.

WHAT’S NEXT: The Seminole season comes to an end as the Noles, led by first-year head coach Don Stark. This was their loss the entire season as they finished (12-1) and look to return to the postseason next year. As for the Panthers, they are headed to Camping World Stadium next week. While Dr. Phillips and Seminole were battling it out, so were Deerfield Beach and Miami Southridge. The defense of Southridge appeared to be too much for Alabama commit wide receiver Jerry Jeudy and the rest of the Deerfield offense. Southridge won 26-7 which sets up a Dr. Phillips matchup in the FHSAA 8A State Championship game. The Spartans and the Panthers are set to play next Saturday night, December 10th, at 8pm at Camping World Stadium for a shot at a state title.