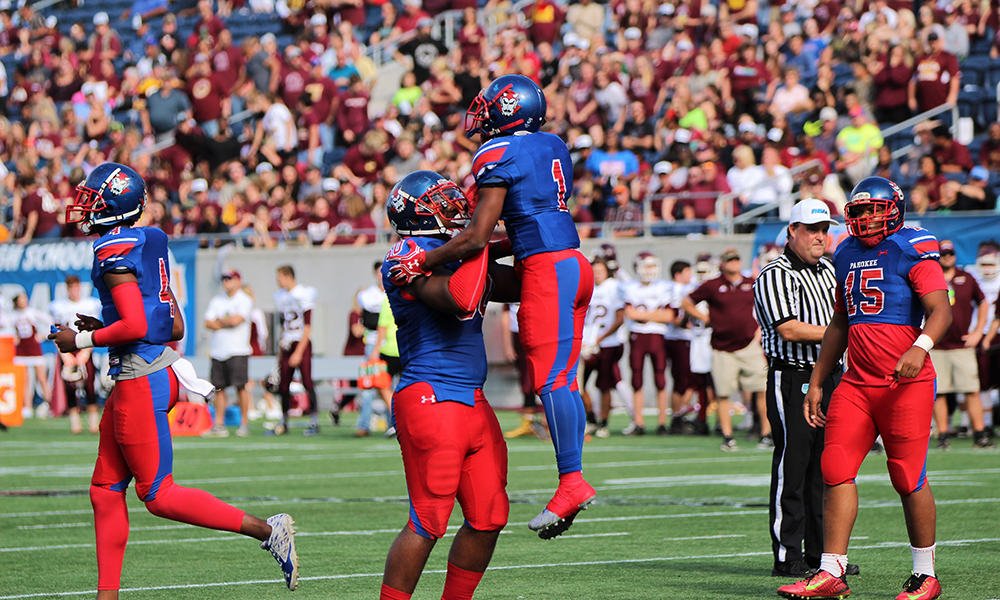 With both teams coming in undefeated, there was a lot on the line for both teams.

However, one team looked more prepared for the game than the other as the Blue Devils (14-0) easily took down the Gators (13-1), 34-21, to win their first state championship since 2008 and their seventh overall state championship in school history .

Baker got their first drive of the game started quickly and was able to drive the ball down the field eating up over four and half minutes of the clock. However, the first of three turnovers in the first half came into haunt the Gators with a fumble that was recovered by Pahokee’s Tyquan Kinsler, but things didn’t get far for the Blue Devils to capitalize on the turnover as a fourth down conversion failed.

With Baker getting the ball back, though, things didn’t get any easier, fumbling the ball quickly after three plays.

Now with the ball back, Pahokee made quick work of the turnover as they played completed an eight-play drive with RB Rodney McKay scoring from six yards out with 2:38 left in the first quarter.

Baker seemingly still couldn’t get things going as the first quarter came to an end as their third drive ended in a punt.

Having the ball back after the Baker punt, Pahokee took eight plays again to take a 14-0 lead with Rodney McKay scoring his second and final touchdown of the game with 8:55 left. That drive was helped by three straight pass completions from Tyrone Smith that resulted in a gain of 72 yards through the air. Smith finished the game 14 for 20 for 232 yards, one interception, and one touchdown

The rest of the second quarter was seemingly crazy as both Pahokee and Baker traded interceptions within a matter of 20 seconds with Baker getting the ball back for the rest of the quarter. The Gators managed to drive the ball all the way down to the Pahokee three, but poor clock management by Baker resulted in no points being scored as the Blue Devils took a 14-0 lead into the half.

Pahokee got the ball to start the second half, but it appeared that Baker found a momentum shift as they stopped the Blue Devils turning the ball over on four downs. That is when the Gators saw things starting to click.

With a 10-play drive that took four minutes off the clock, Baker scored off what might have been one of the craziest plays of the year with a fumble by quarterback Ciurleo which was then scooped up by Gabe Vicari for a three-yard touchdown.

After that, the touchdown by Baker, every drive from there after between both teams became mostly scoring drives as Pahokee responded back with a 49-yard touchdown pass along the sideline from Smith to Tyron Arnett to put the Blue Devils up 21-7.

What a play by Tyron Arnett on beautiful pass from @liltyye. @Pahokee_MSHS leads 21-7 in the third. pic.twitter.com/1ZPNVuBLBA

Baker responded back early in the fourth quarter with a touchdown run from Ciurelo to draw the score to 21-14 with Pahokee still ahead. However, at that point, it was really too late for Baker as Pahokee capitalized on the next drive with a 9-play, 80-yard drive to go up 27-14 and then minutes later scoring again on Roy Walker pick-six to go up 34-14 with 4:27 left in the game.

The Gators did get to respond with one final touchdown with just over a minute left in the game with a 10-yard touchdown pass from Ciurleo to Logan Rickman to make 34-21, the final score of the game. The win gave first-year Pahokee head coach Orson Walkes another state championship ring to his collection of rings.