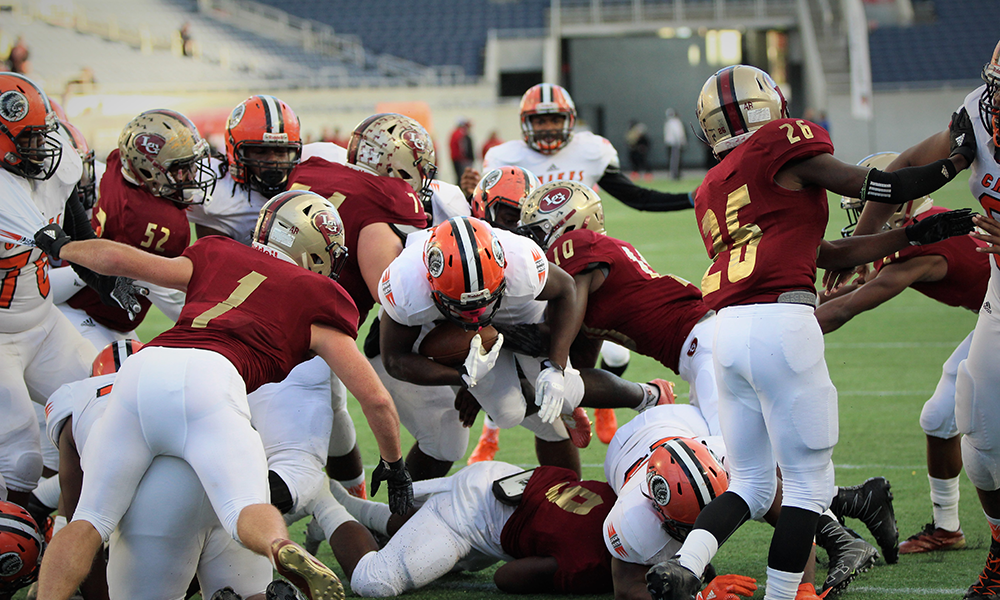 ORLANDO, Fla. — Star power might have been what the doctor ordered to power Miami Carol City to a big state championship win over Lake Gibson in the Class 6A Championship game at Camping World Stadium on Saturday, winning 14-6 over the team from Lakeland.

With Carol City alum and rapper Rick Ross in the stadium, a powerful halftime speech was able to jolt some life into the Chiefs who had fought to a scoreless tie in the first half against the Braves.

It's scoreless at halftime of the 6A Title Game so we found @rickyrozay to give @CarolCitySr1 a pep talk! #FHSAA pic.twitter.com/fYOgXS8A0E

On Carol City’s first drive of the second half is when things started clicking for the Chiefs as they were able to finally score the first touchdown of the game on a six-play drive that was capped off by a 1-yard Nay’quan Wright carry after he had busted off a 51-yard carry on the previous play.

It appeared late in the third quarter that Lake Gibson might have a chance to potentially tie the game as they forced a fumble on the Chiefs at their own 9-yard line. However, the Braves didn’t get anywhere as Zion Hartfield intercepted a Thomas pass that set up a first and goal. Three plays later Wright was in the end zone for his second and final touchdown of the night to take a 14-0.

It was Wright’s first game back after being out with an injury the past couple of weeks. He finished the game with 18 carries for 109 yards and two touchdowns.

Lake Gibson was able to score midway through the four quarter to erase the shutout on the scoreboard, but a blocked extra point by the Chiefs which made it 14-6, made it tougher for the Braves to make a comeback if they were able to get the ball back and score.

With the impressive defensive performance by both teams, it proved out to be one of the best Class 6A state championship games in the last few years as over 6,700 fans attended the game compared to the 3,900 fans that attended the game last year between Armwood and Miami Central.

Aubrey Hill getting the ice water bath as Carol City will win the first state championship since 2003! #flhsfb pic.twitter.com/qOaPgcVyaN