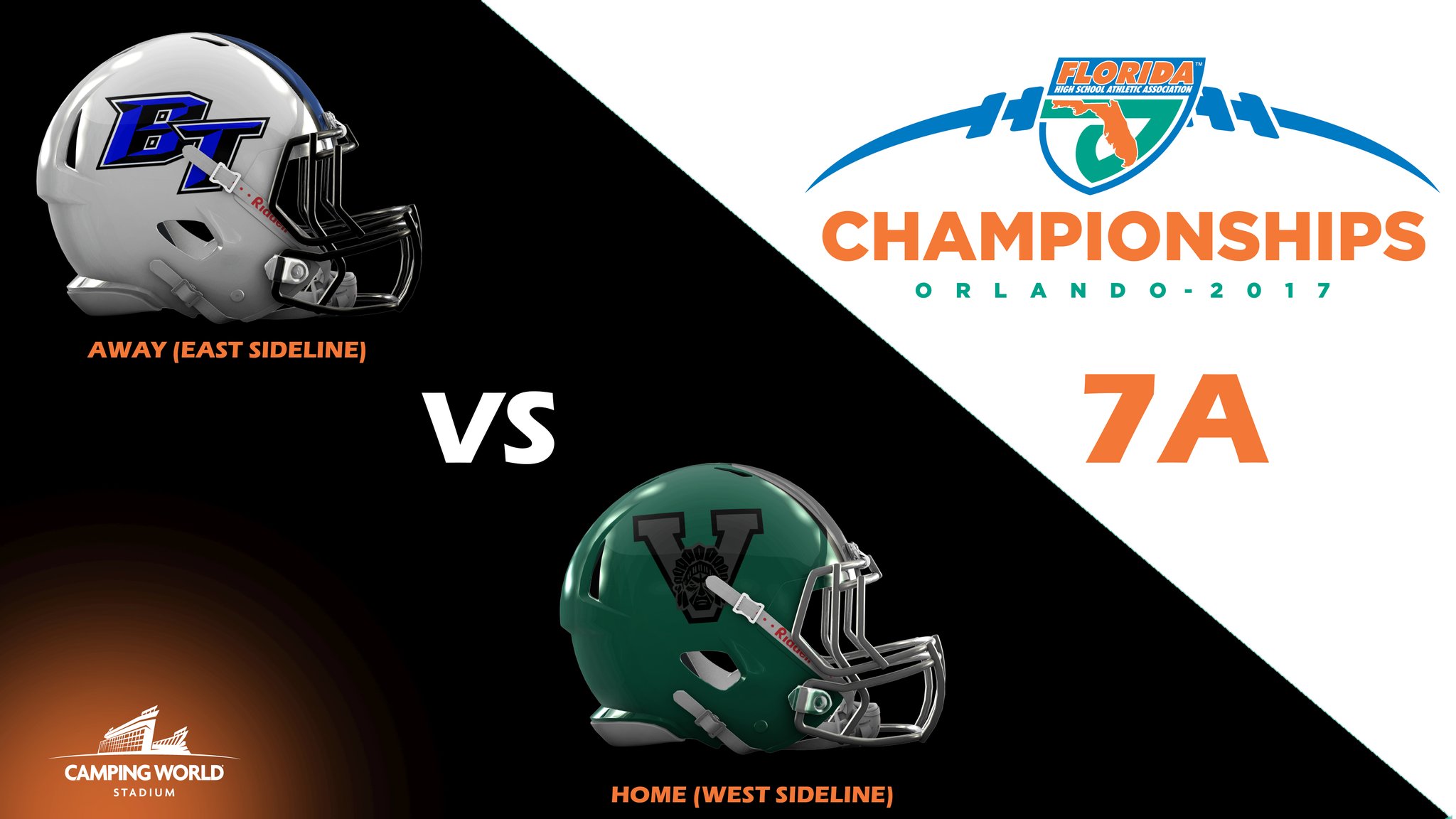 Rankings: No. 10 in the final Associated Press Florida High School poll; No. 12 in Joe Pinkos’ end of regular season rankings.

The Skinny: Darrell Sutherland has been the only coach of the football program at Bartram Trail since the school opened its doors in 2000. The Bears had three previous state semifinal appearances but finally broke through with a 34-29 state semifinal win over Plant a week ago. Bartram Trail has a two-headed monster at quarterback in Auburn commit Joey Gatewood (1,355 yards passing, 12 TD’s, 1 INT, 150 carries, 1,029 yards, 15 TD’s rushing) and Riley Smith (1,367 yards passing, 17 TD’s, 7 INT’s, 587 yards, 8 TD’s rushing). The leader on the ground for the Bears is RB Devin Ellison (1,197 yards, 8.4 average, 17 TD’s). Both Gatewood and Smith have similar numbers and both are 6-foot-5 and around 230 pounds. Bartram Trail is pretty balanced offensively as well, with 2,817 yards passing and 3,428 yards rushing. The leading target for both QB’s is WR Xavier Hutchinson (68 receptions, 916 yards, 11 TD’s). Griffin Helm and Gunnar Hitzeman are two big-time receiving targets as well for Bartram Trail. The Bears defense has struggled at times, but has played a brutal schedule with games against Georgia power Cartersville and Cocoa as well as St. Augustine. The Bears have been much better at forcing turnovers in the postseason, with 6 turnovers forced in the regional final against Fleming Island and two in the state semifinals versus Plant. LB Johnny Amell leads the Bears defensively with 83 tackles, including 8 for loss and 5 sacks. OLB Corbin Hagans (70 tackles, 6 for loss, and 3 sacks) also contributes to the Bears defense.

Playoff History: Venice is 26-17 in playoff games including a 5A state championship in 2000 and appearances in the state semifinals in 2002 and 2016.

Rankings: No. 2 in the final Associated Press Florida high school poll, No. 3 in Joe Pinkos end of regular season ranking.

The Skinny: Venice finally got over the St. Thomas Aquinas hump, defeating the three-time defending 7A state champions 27-20 in last week’s state semifinal to earn its first state championship game appearance since their only state title in 2000. Now a meeting with a high-powered offense and two-headed quarterback with Bartram Trail’s Joey Gatewood and Riley Smith. Venice has it’s own high-powered attack, as the Indians are led by senior QB Bryce Carpenter who had video game-like numbers (2,837 yards, 42 TD’s, 10 INT’s). Carpenter also rushed for over 1,000 yards and 18 TD’s on the ground, giving him 60 total touchdowns. RB Brandon Gregory (92 carries, 622 yards, 8 TD’s) is the leading rusher among running backs for Venice. The Indians also have a record-breaking wide receiver in Jaivon Heiligh (123 receptions, 2000 yards, 142.9 yards per game, 32 TD’s). Defensively the Venice defensive line is led by Riley Prachar (106 tackles, 12 tackles for loss, and 7.5 sacks). LB Caleb Smith leads the Venice defense with 146 tackles, and Carson Sullivan and Tyrone Barber had 125 tackles each. Venice had 34 sacks as a team and outscored it’s opponents 556-201. The last time Venice was in the state championship game, they set an FHSAA record for points in a title game with a 77-14 win over Dwyer.

This has all the makings of a shootout Saturday afternoon at Camping World Stadium in Orlando. Venice has scored 556 points in 2017, Bartram Trail 593 points. Venice has the high-powered attack led by quarterback Bryce Carpenter, who has 60 total touchdowns, including 32 TD’s receiving by Jaivon Heiligh, and Bartram Trail has the two-headed quarterback monster of Joey Gatewood and Riley Smith. They could need more lights on the scoreboard at Camping World Stadium on Saturday, but bad weather could affect the offensive festival between these two teams. Venice is in the state title game for the first time in 17 years, and Bartram Trail has never advanced to this level, so there may be nervousness on both sides to start. The difference here seems to be the Venice defense, which allowed 192 less points than Bartram Trail. Someone’s defense will have to make a stop to get a difference between these two teams.

WHO THE COMPUTERS PREDICT

We take a look at the computers and their predictions for the 2017 FHSAA State Championship games:

We gave our media pickers the biggest challenge of the year by not only predicting the winner of each state championship game, but the actual score of each game as well. Here are their picks: