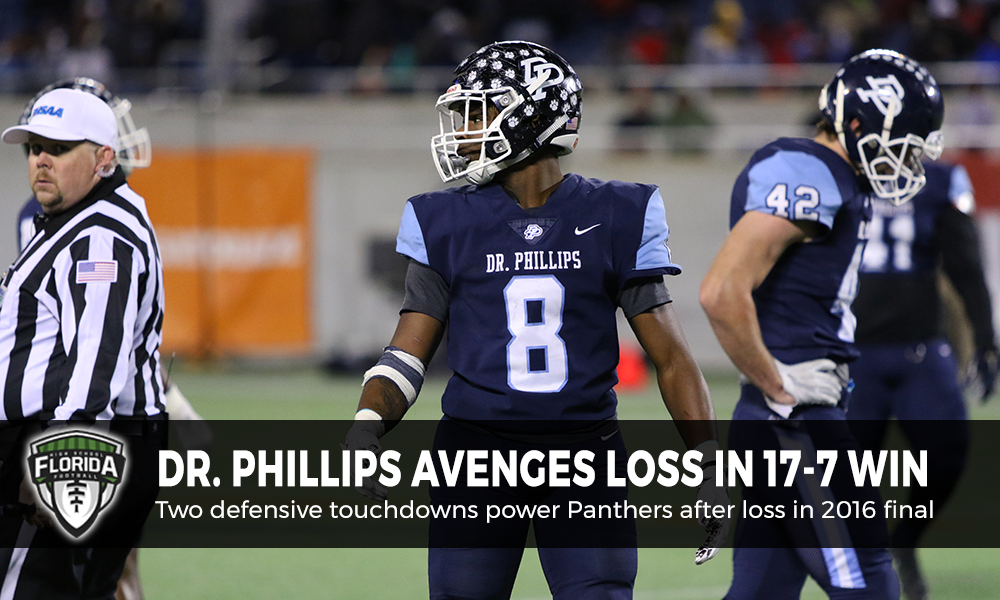 ORLANDO, Fla. — Finishing the mission has been knocking on the door for the Dr. Phillips Panthers for a long time.

In 2010, the mission fell short after being run over by Miami Central in the Class 6A State Championship.

Last year, the mission fell short again after giving up 14 points in the fourth quarter to Miami Southridge after holding a 10-0 lead for most of the game.

The mission was finished at Camping World Stadium.

And Dr. Phillips can credit their defense for helping them finish that mission to win the 2017 Class 8A State Championship.

In a game that would most certainly count as a defensive slugfest, Dr. Phillips found the ways to take advantage of Delray Beach Atlantic’s mistakes.

After trading punts to start their opening drives, the Panthers punted back to Atlantic again to give them their second drive of the game. As such the Panthers managed to shut the Eagles’ second drive down quickly to force a three-and-out.

What came next would be a good indicator of what the rest of the game would be like.

On the ensuing punt by Atlantic, Japerri Powell, who had a monster night for Dr. Phillips, was in the right position at the right moment to block Brian Litang’s punt and then recovered the ball at the eight-yard line to take it into the end zone for the first score of the game to give the Panthers a 7-0 lead with 4:25 left in the first quarter.

As with most of the first quarter, Dr. Phillips and Atlantic kept stopping each other on their drives either forcing punts or turnover on downs.

However, just slightly midway through the second quarter, Dr. Phillips’ offense, which struggled most of the night, found their way into field goal range with Sterling Stockwell knocking in a 28-yard field goal with 4:52 left on the clock.

At halftime, Dr. Phillips lead 10-0, the same score they lead by at half last year, which had people on edge and wondering if deja vu could happen.

The deja vu, though, was not in the plans this time.

In the third quarter, both Dr. Phillips and Atlantic kept trading punts or forcing each other to go for it on fourth down and forcing a turnover on downs, keeping a 10-0 lead for Dr. Phillips at the end of the quarter.

As the fourth quarter started, Dr. Phillips found their drive stalled out again and punted back to the Atlantic.

However, the next Atlantic drive wouldn’t last very long as Cameron Williams intercepted Antoine Williams pass at the Eagles’ 9-yard line and walked it into the end zone for Dr. Phillips second defensive score of the night to take a 17-0 lead with 9:53 left.

Atlantic was not quite ready to throw in the towel just yet though.

After another stalled drive and drive that forced Dr. Phillips into a three-and-out, Atlantic finally put their best drive of the night together of seven plays for 70 yards as Antione Williams, who almost gave the ball away on the scoring play, scored from 24 yards out to cut Dr. Phillips lead to 17-7 with 3:38 left on the clock.

The comeback though was not meant to be as the pursuing onside kick was recovered by Dr. Phillips, allowing them to seal the win and to finish the mission.

And Head Coach Rodney Wells summed up about finishing, which is something they did not do last year which led to them doing the finish up-downs at the start of the fourth quarter this time around instead of the end of the game.

“We were here last year, 365 days ago,” Wells said. “We were right here in the same spot 10-0. That is why we did finish up-downs at the beginning of the fourth quarter because we been talking about finishing all year since last year. It’s amazing what these guys have done.”