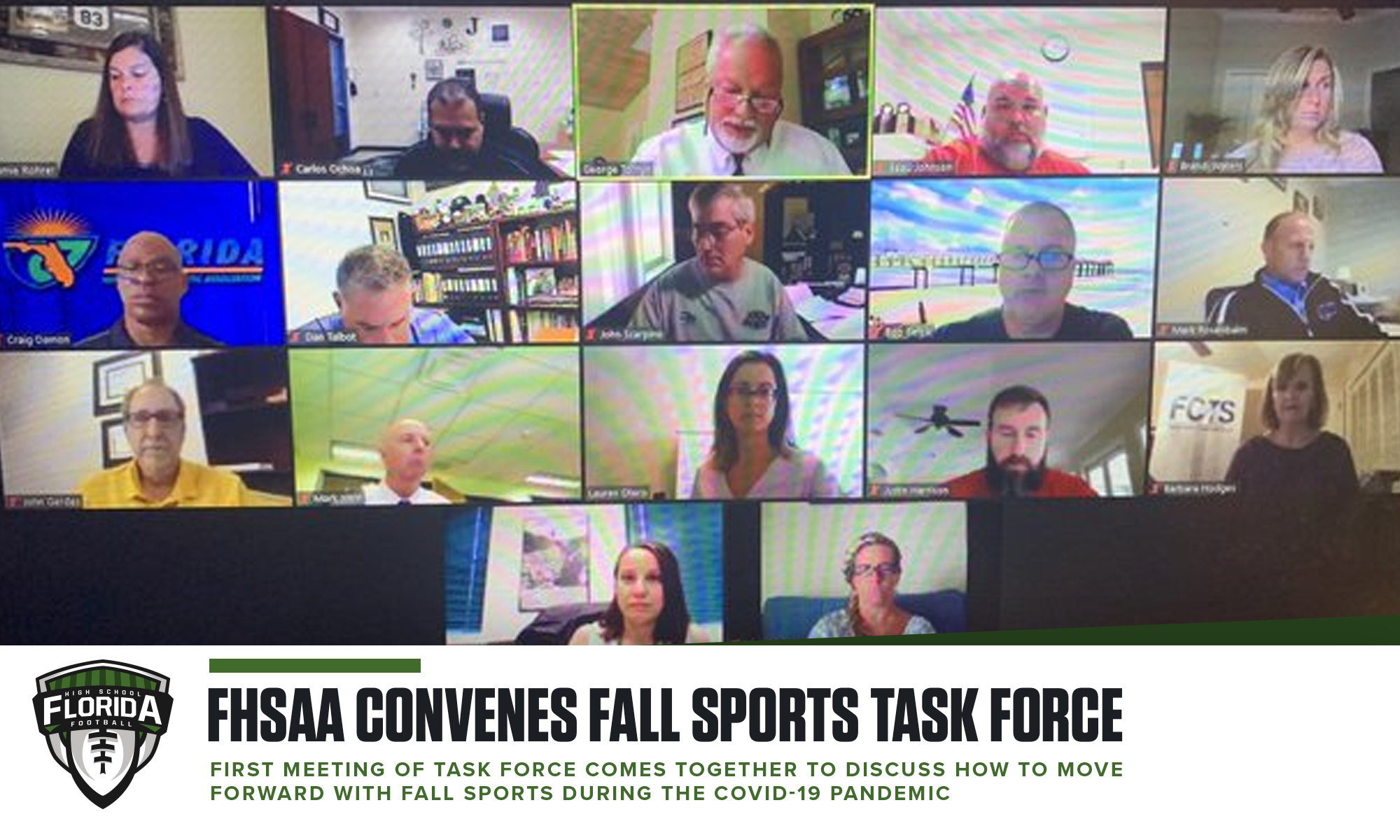 GAINESVILLE, Fla. – The Florida High School Athletic Association convened its first meeting of their Fall Sports Task Force on Tuesday afternoon to find ways to help schools be able to return to play as a result of the COVID-19 pandemic via Zoom.

The task force came about through the FHSAA Board of Directors meeting two weeks ago and was highly advocated and led by FHSAA Board of Members President-Elect, Lauren Otero, who is the Assistant Principal of Administration (which oversees athletics) at Plant High School in Tampa.

From the onset, the biggest priority that was raised in the meeting was about safety.

Things regarding the safety of players, coaches, and officials were raised many times during the meeting which lasted for nearly two hours.

From the early going of the meeting, a lot of the task force committee members expressed concern about the ability to be able to start on time as some schools districts in different parts of the state have been able to begin offseason workouts in small groups

Pam Romero, who was representing Palm Beach County on the task force said that everything has been tabled for a July 6 return of student-athletes to start fall workouts in their county which means they are unlikely to be able to be ready when fall practices start on July 27 for various fall sports including football and volleyball.

Romero’s comments were also echoed by Rocky Gillis, the Athletic Director of Broward County and Carlos Ochoa, the Athletic Director at Hialeah Gardens High and FHSAA Board of Directors member. They both have said their student-athletes have not been permitted to return to campus yet and there is no timeline as to when.

But with those comments from South Florida, came comments of how different things look across parts of North Florida and into the Panhandle from Blountstown Athletic Director and Head Football Coach, Beau Johnson.

Johnson said that a lot of schools in the Panhandle have been able to start with their offseason workouts and have not had as much of an issue.

However, Johnson did ask if the FHSAA had ever stopped the rest of the state when a hurricane hit regarding a start date and with the knowledge of the FHSAA Staff, that answer was a no.

What might have been the biggest point of contention in the meeting is the fact that the FHSAA is holding steady to the plan that the FHSAA plans for fall sports to start on time following Governor Ron DeSantis and the Florida Department of Education’s plan to have schools reopening on time in the fall despite the fact of the rising number of COVID-19 cases in younger people over the last two weeks across different part of the state.

The start date of July 27 was echoed as the plan by FHSAA Executive Director George Tomyn many times during the task force meeting. Tomyn told the task force that it would be “inappropriate to go against the recommendations and plan Governor DeSantis and FLDOE has set for reopening schools on time.”

With that in mind, several task force members were asking if there was a Plan B including that from Duval County Public Schools Athletic Director, Tammie Talley, who was also very critical about the lack of guidance from the FHSAA Staff over the last couple of months, especially after when spring sports were canceled in mid-April.

However, a published Plan B does not appear to be available at this point, according to the FHSAA.

The lack of a Plan B lead to more questioning including if teams couldn’t play a contracted game, especially in football where contracts are highly regarded given the gates that football generates and how they are able to fund the rest of the athletic program at most schools. Tomyn told the task force that they “would not hold schools fee to the fire and will work with schools if they can’t start on time with the season.”

With that in mind, there are a lot of questions still at this point if schools will be able to travel outside a region or even across the county line to play a game. Gillis also made mention that the Archdiocese of Miami has already told all their high schools that they will not be allowed to host any out-of-state teams, at least regarding fall sports. Other schools across the state have also seen out-of-state games canceled in football that was slated to be some big-time matchups for the 2020 season.

Given those facts in hand, the task forced asked for FHSAA Staff to send out a survey to Superintendents in all the school districts across the state as well as school headmasters at private schools to encompass all of the FHSAA membership with a variety of topics to see where schools stand in returns of reopening and being able to return to play.

As for what could the FHSAA State Series in various sports look like? There was a hint that things may not look normal depending on what course of action is taken.

Tomyn told the task force that a traditional format might not be held as they have been in the past. That led to some of the task force bringing up suggestions including Johnson and Talley suggesting at Regional/Sectional championship format could be best served as a format for postseason play in various sports.

The way to determining who would make a postseason playoff bracket of any kind was also brought up given every major team sport uses a ranking like the RPI in football or MaxPreps rankings in volleyball, among other sports in other seasons, and the game requirements.

As it appears now a lot of schools may not be able to meet the 10-game requirement in football given the issues of schools all not being on the same page regarding offseason workouts and conditioning.

The task force made it clear that they did not want to see a school punished for not meeting the requirements or any minimum requirements in any sport.

It was also made clear that sports like Cross Country, Golf and Bowling might be able to stay the course starting things without much modification to things as the sports are individual sports whereas football and volleyball will need to see modifications, especially since football is a full-contact sport and volleyball is played in close contact with others indoors.

However, at this point, there has been no discussion among the FHSAA Staff to move any fall sports to a different season to help accommodate things during the ongoing COVID-19 pandemic.

But things did not end there with regarding safety and potentially changing things for different sports.

John Scarpino of the Mid-Coast Officials Association sounded the alarm on things for officials in this state as the average age of officials across Florida is 53 years of age which puts a lot of officials into the high-risk range with COVID-19 impacts.

Scarpino wanted to see more from the FHSAA regarding the protection and safety of officials. At that point, the FHSAA made it clear that there are no plans at this time regarding requiring a face mask used during competitive play.

With no clear plan in place, Scarpino was tasked by Otero to come up with recommendations on research he will do regarding officials as USSAA and AAU among other groups are hosting some youth events in different parts of the state this summer.

The next FHSAA Fall Sports Task Force meeting is scheduled to take place on Wednesday, July 1 at 9:00 a.m. Eastern time via Zoom along with a potential of a live stream on YouTube as well.

FHSAA Board set for biggest vote in 100-year history: A lookahead to Friday from #WeWantToPlay to political influence in the upcoming decision