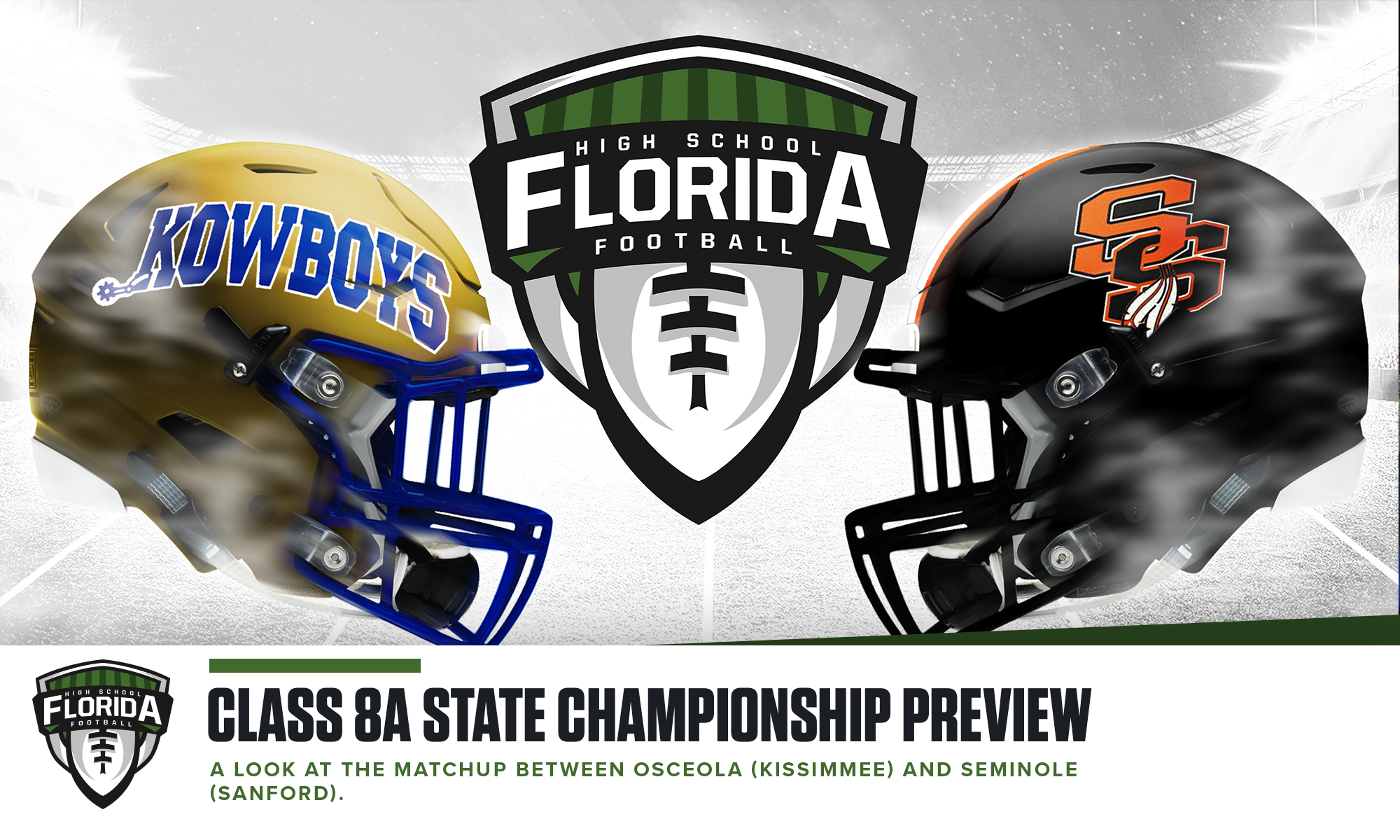 NOTES: Osceola is competing in their sixth overall state championship game and their first since 2015 when they played in the Class 8A State Championship game in Orlando. … The Kowboys have only won one state championship in school history overall and that was back in 1998 in Class 5A, then the second-highest classification in Florida. … Seminole is competing in the first state championship game since 2008 when they defeated Miami Northwestern in Orlando and their second overall state championship game in school history. … On offense for the Kowboys, things will start under center with junior QB Chad Masco II, who is a three-star prospect with nearly a dozen offers is 85-of-143 passing for 1,216 yards in 11 games. He has thrown 12 touchdowns against just two interceptions. … When it comes to the team’s ground attack, a variety of players will be called on including the likes of junior RB Ja’randy Swint who has 817 yards rushing on 121 carries and nine touchdowns and junior RB Jamison Jones who has 70 carries for 384 yards rushing and 4 touchdowns. … The leading receiver for Osceola is Izaiah Jean-Baptiste who has 349 yards receiving on 31 catches and three touchdowns this season. … And it would be worth mentioning that some of this would not be possible without the help of senior OL Xavier Castillo who is a three-star Vanderbilt signee at OG.  … Defensively for the Kowboys there are several key guys to keep an eye on. The first one to keep an eye on is senior LB Nolin Eaddy who has 84 tackles (30 solo) and nine tackles for loss this season. Eaddy also has five sacks as well as two forced fumbles and two fumble recoveries this season. … Another key defensive player to keep an eye on is senior LB Alvin Lee II who has 65 total tackles (29 solo), three sacks, and a forced fumble this season as well as sophomore DT John Walker who has 65 total tackles (35 solo) and has racked up a team-leading 15 sacks in 11 games this season. … The leader of interceptions for the Kowboys is junior SAF Jeremiah Wilson who has racked up five interceptions this season along with 42 total tackles (22 solo) and has also recovered two fumbles as well. … For Seminole, who is being led by first-year head coach Eric Lodge, is led by senior QB Timmy McClain, who is a three-star USF signee, has a great senior season going 110-of-176 passing for 1,525 yards with 16 touchdowns passes thrown against just two interceptions in 11 games played. … McClain’s favorite target by far is senior WR Jimmy Horn, who like McClain is a three-star USF signee. Horn has 44 receptions for 740 yards receiving and nine touchdowns on the season. … On the ground, expect to see a mix of guys carry the ball including McClain who has 577 yards rushing and 10 touchdowns as well as junior RB Donta Whack, who has 529 yards rushing on 94 carries and has scored six touchdowns this season. … Defensively, keep an eye on senior DE Josh Lyles who leads the team in tackles with 74 and has collected a team-leading seven sacks in 11 games played. Another key player to keep an eye on is junior LB Kameron Moore who has collected 69 tackles this season and has one sack as well. Senior DE Zion Alce has five sacks for the Fighting Seminoles to go along with 43 tackles and four tackles for loss as well as one fumble recovery and one forced fumble. … A couple of guys to keep an eye on in the secondary is junior DB Demari Henderson who leads the team with three interceptions while senior CB Marseille Taylor, a three-star prospect, has one interception this season and 20 tackles.