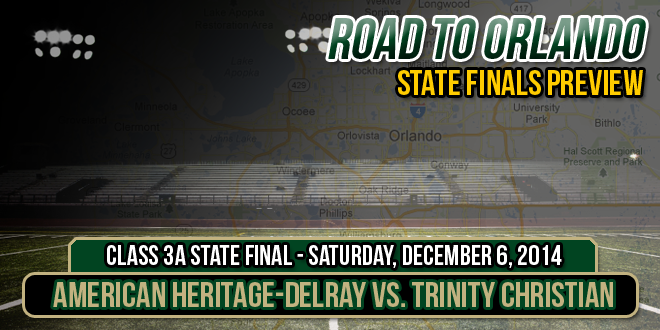 The two teams meeting in the 3A State Championship Game at the Citrus Bowl in Orlando Saturday afternoon have owned this class the last five years.

One thing that has changed since American Heritage’s last state championship in 2011 is the Stallions coach. Doug Socha left after the 2011 title and Stacy Sizemore took over. After a second round exit in 2012, American Heritage missed the playoffs completely in 2013. Sizemore says that disappointment caused his team to work harder.

“Not making the playoffs isn’t acceptable at American Heritage,” Sizemore said. “Our team went back and started working out harder in the offseason and they’ve had a chip on their shoulder all year to get to the playoffs and make it back to Orlando.”

As said earlier, this is the third meeting between American Heritage and Trinity Christian in a state championship game since 2009. Trinity won the last time out in 2010, and while none of those players still play for American Heritage, Sizemore is definitely reminding his players about the history.

“I have been telling our guys about the last time we played Trinity Christian,” Sizemore said. “While none of those players were here back in 2010, they are well aware of the history.”

American Heritage’s only loss was the opening game 14-7 at 8A Miramar. Offensively, the Stallions are led by dual-threat quarterback Warren Robinson, who rushed for 1,014 yards and 18 touchdowns and passed for 914 yards and another 11 TD’s with only one interception.

Unfortunately, Robinson was injured in the 23-7 regional final win over Westminster Christian and didn’t play in the 63-13 romp over Clearwater Central Catholic in last week’s state semifinal. Sizemore hopes to have Robinson back for the state championship game.

“We actually were down to our third string quarterback against Westminster,” Sizemore said. “Trenard Davis was healthy enough to play against Clearwater Central Catholic, and we hope Warren (Robinson) can return this week.”

Davis has split time at quarterback with Robinson, throwing for 659 yards with 7 TD’s and just 2 interceptions. Devin Singletary is the Stallions leading rusher with 1,358 yards and 15 scores, averaging 10.7 yards a carry. Defensively Michael Hall leads American Heritage with 80 tackles, including 23 for loss. Josh Ward leads the Stallions with 23 sacks.

It’s been a strange season for Trinity Christian.

The Conquerors opened the season with a 17-0 loss at nationally ranked Buford (GA) on national TV, then had the next two weeks off as one game was cancelled due to weather. Then another team, Champagnat Catholic, pulled out of a Sept. 12 game, but University Christian stepped in to play instead. The Conquerors then lost 28-7 at IMG Academy on Oct. 16, but have won their last six games, all by double digits.

Verlon Dorminey is in his 24th season and looking for his fifth state title as Trinity Christian head coach. He knows American Heritage will be tough test for his team.

“We are definitely happy and proud to be back trying to defend our state title,” Dorminey said. “We aren’t happy about the opponent, but we are happy to be back playing in the Citrus Bowl on Saturday.”

Trinity Christian is all about defense. The Conquerors have allowed 157 points all season, including only 70 points in the current six game winning streak. Trinity allowed just 1.7 yards per carry, and the entire defense is receiving D-1 offers. Dorminey says the opening week loss to Buford really refocused the team.

“Defensively we felt pretty good about where we are, but our offense really struggled in that game,” Dorminey said. “It was a great opportunity playing on national TV on a late night start, and while we didn’t play we we really re-focused our efforts after that game.”

Linebacker Victor Alexander, a UCLA commitment, leads the Conquerors with 66 tackles, including 15 for loss. Another linebacker, Jeff Holland is Trinity’s leader in sacks with 10.5, and another linebacker, Andre Smith, is committed to UNC. The secondary features Deontai Williams, a Georgia commitment, and Kevin Toliver II, a commit to LSU. Dorminey says while this is a talented Trinity Christian defense, it’s also very talented.

“We have 12 seniors who have Division 1 offers,” Dorminey said. “But one thing that has impressed me is how close this group is and how much they all like each other.”

After some early struggles, Billy Cobb has stepped in at quarterback and passed for 21 touchdowns and only three interceptions. Chris Barr leads the receiving corps with 43 catches for 619 yards and 6 TD’s. It’s mostly running back by commitee for the Conquerors, led by Rasheed Martin with 778 yards and 8 touchdowns. Michael Clark chips in with 585 yards and 10 scores.

On Saturday, Trinity Christian will meet American Heritage in the 3A State Championship Game from the Citrus Bowl in Orlando with kickoff set for 1:07 p.m.