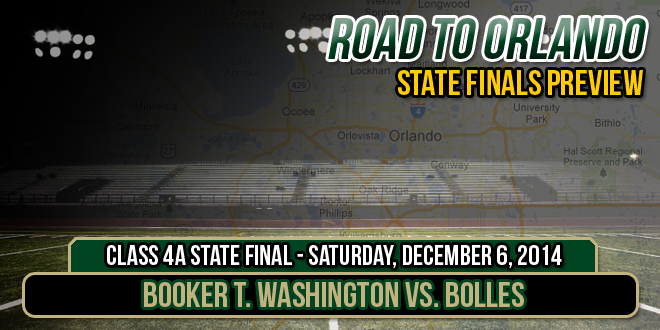 If it’s the 4A State Championship Game, it must be Booker T. Washington vs. Bolles.

The two programs will meet for a fourth consecutive year, which ties a state record, in the 4A title game on Saturday night at the Citrus Bowl in Orlando.

Bolles won the first meeting 33-25 in 2011 for the Bulldogs state record 11th state title and 10th state championship under long-time coach Corky Rogers, who is Florida’s leader in career wins. Booker T. Washington took the last two meetings rather easily though, rolling 35-7 in 2012 and pulling away to win 40-21 last year in the 4A state championship game.

Tim Harris, Jr. is in his first year as Booker T. Washington coach, taking over for his father, Tim, Sr., who left the Tornadoes after last seasons state title to take a job as an assistant coach at the University of Miami. Harris says the transition between coaches has been extremely smooth.

“We really haven’t missed a beat with the coaching change,” Harris said. “We’ve just gone out there every day and worked hard and it shows as we will playing in the Citrus Bowl on Saturday night.”

Booker T. Washington (13-0) has won 39 games in a row, but none were as difficult as last Friday’s 14-12 win at Cocoa. Cocoa scored on the last play of the game to get within 2, but the Tornadoes defense stopped Cocoa quarterback Bruce Judson a yard short on the 2 point conversion attempt to see the win. While the winning streak is impressive, Harris doesn’t try to spend very much time focusing on that.

“It’s definitely an impressive streak, and we are very proud of it,” Harris said. “But if you get too wrapped up in those things you don’t focus as much on the little things, like winning one game at a time. We try to enjoy each win that night, and the move on.”

Offensively, Booker T. Washington has a nice mix between run and pass.

Running back Mark Walton is the Tornadoes leading rusher with 1,286 yards, a 7.0 yard average and 19 touchdowns. Quarterback Maurice Alexander has rushed for 365 yards and five TD’s, but more impressively has thrown for 2,513 yards and 25 touchdowns with only four interceptions.

Antonio Callaway leads the Booker T. Washington receivers with 818 yards and 7 touchdowns, while Vaquan Small leads the Tornadoes with 10 TD’s through the air. Alexander has had some big shoes to fill with replacing Treon Harris, who is now starting for the Florida Gators. Coach Tim Harris, Jr. says Alexander has done a fine job for this Washington team.

“There were some games earlier in the season where we weren’t really sure how Maurice was going to respond,” Harris said. “But we’ve found out when the lights are the brightest he does have some of what Treon had.”

The Washington defense is led by Andre Duncombe with 74 tackles, including 10 for loss, and 5 sacks. Devonaire Clarington leads the Tornadoes with six sacks.

As said earlier, Bolles (11-2) is certainly no stranger to state championships and championship game appearances. The Bulldogs have a state-record 11 state titles, 10 under Corky Rogers, who at age 70 is in his 26th year as head coach at Bolles.

The Bulldogs had to be road warriors again in the playoffs this year, after losing to Raines during the regular season. Bolles won at Umatilla, Raines, and the state semifinals at Madison County last week to advance back to Orlando. Rogers is now 15-0 in state semifinal games at Bolles.

Rogers credits a regular season schedule which included Niceville, Plantation American Heritage, North Marion and DeLand on getting this team ready for the postseason.

“I do feel like when you go against quality programs like that, it brings out the best in your team,” Rogers said. “Some of them were wins and some of them were victories, but it definitely gets you ready for a situation like we will face Saturday night.”

Like Washington, Bolles will mix it up on offense. Dexter Carter leads the Bulldogs in rushing with 862 yards and 13 touchdowns, while Christian Bermudez chips in 741 yards on the ground and 8 scores. Quarterback Joe Edden has only thrown for 1,334 yards, but has thrown 19 touchdowns and more importantly no interceptions. Terrell Moorer is Bolles leading receiver with 46 catches for 716 yards and 12 TD’s, while Carter adds 27 receptions and 7 scores through the air.

“We are going to miss guys like Dexter and Christian when graduation rolls around,” Rogers said. “Those guys have worked through injuries this year and through their career and have been great representatives of our school.”

Rogers says despite the coaching change for Booker T. Washington, there isn’t much different about this Tornadoes team.

“I guess there’s a touch of different people on there, but for the most part there’s not much difference with them,” Rogers said. “They still have excellent athletes are well-coached and are just a very good team.”

Defensively Bolles is led by Kyle Johnson with 161 tackles. Trenton McGhee adds 98 tackles and leads the team with 14 tackles for loss. Jordan Jackson leads the Bulldogs with 5 sacks. While Washington has handled Bolles fairly easily the last two years, never count out Rogers and his Bolles teams.

“We can’t turn the ball over, and we have to control the football to beat this team,” Rogers said. “I don’t know if we are going to be able to score on them, but if we don’t turn it over, we definitely have a shot.

The 4A State Championship Game between Booker T. Washington and Bolles will kick off Saturday night from the Citrus Bowl in Orlando at 7:07 PM.