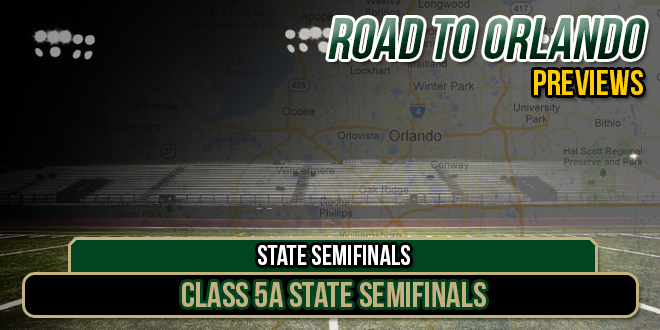 The road: Wakulla def. Bay 21-16, Rickards 34-19 and Suwannee 35-14 ; Clay def. Eastside 44-0, North Marion 65-58 and Nature Coast 40-28
Skinny: Three weeks into the season, the Clay offense was struggling trying to find an identity scoring 6 points in three weeks. A good part of that was that senior tailback Bilal Ally was coming off a torn ACL injury and was likely a little timid at first. By Week 4, Ally started getting a little more comfortable, the results speak for themselves as the Blue Devils closed out the regular season with wins in 7 of their last 8 games. Ally (2, 757 yards, 35 TDs) has carried the team on his back especially come playoff time accumulating a state record 496 yards and 6 touchdowns in a second round shocking win over North Marion. Against Nature Coast, Ally out dueled the nation’s leading rusher DeShawn Smith accounting for 365 yards on 49 carries. Try to stop him and the Blue Devils also can counter with junior tailback Colin Wilson (473 yards, 9 TDs) and junior quarterback Jaylan Jenkins (508 rushing yards, 7 TDs). Jenkins and Wilson stepped up big last week to spell Ally at times when he needed a breather. This isn’t the Wakulla team you saw back in August on ESPN against Spartanburg, SC; since that loss the War Eagles have run off 12 straight wins and are one win away from their first state finals appearance since a 2011 loss to Miami Norland. Offensively, the Eagles are led by 5 star quarterback and Florida commitment Felipe Franks (2,347 yards, 30 TDs), tailback Demarcus Lindsey (1,042 yards, 8 TDs), receivers Keith Gavin (779 yards, 12 TDs), Kelton Donaldson (522 yards, 6 TDs) and Justin Davis (439, 4 TDs) and averaged 40 points a game during the regular season. Despite not putting up gaudy stats, the Wakulla defense has been solid holding teams to 16.5 points a game during the playoffs and will be heavily tested against the Blue Devils ground attack.
Joe Pinkos Line: Clay by 4
FHSF Predictions
Joshua Wilson: Wakulla 38, Clay 35
Corey Davis: Clay 35, Wakulla 31

The road: Jesuit def. Lakewood 31-8, Jefferson 38-7 and Dunbar 42-0; Bishop Moore def. Palm Bay 38-7, Merritt Island 49-28 and Hallandale 51-46.
Skinny: Bishop Moore is back in the state semi-finals for the second consecutive year after losing to Plantation American Heritage in the semi’s last season. The Hornets defense, which had been lights out holding opponents to a touchdown or less in 9 of the 12 games, was exposed last week giving up 46 points in a shootout win over Hallandale. For the third time in the last 5 years, Jesuit found itself in the Elite 8 and finally advanced to its first state semi-final appearance. The Tigers won’t need any extra motivation for this one as it was a one point loss to Bishop Moore last season which kept the Tigers from going to the Final Four. The Tigers defense has only allowed 8 points or less in 8 of the 13 games, including posting five shutouts to go along with 67 sacks and 18 interceptions. Junior quarterback Daniel Boone (1,550 yards, 15 TDs) directs the offense along with junior tailback Malik Davis (2, 148 yards, 27 TDs).
Joe Pinkos Line: Jesuit by 6
FHSF Predictions
Joshua Wilson: Bishop Moore 32, Jesuit 27
Corey Davis: Bishop Moore 31, Jesuit 28