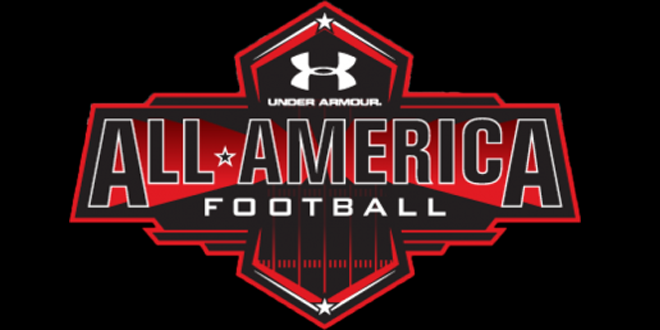 With the ninth edition of the Under Armour Game taking place at the Orlando Citrus Bowl today, some of the best talent from the Sunshine State got a chance to show out today.

However, not all was well with the game as Team Highlight ran away with the game, pitching the game’s first shutout with a 27-0 win over Team Armour.

Quarterback play was not solid early in the game, disappointing likely fans who wanted to see future quarterbacks who are heading up to the next level. It also drew a few critical comments from the media in the process.

And things certainly going good for West Orange’s Woody Barrett, who found himself in the rath of Rashan Gary of Paramus Catholic out of New Jersey.

Rashan Gary just flew in off the edge for a sack on QB Woody Barrett.

What is usually typical in most All-American games, the defenses usually rule as offenses have trouble getting in to a routine. As such, the story line was the same early on.

It Was Getting UGLY

It was starting to get ugly as the game progressed, with again the media making the comments of what they were seeing, especially with the game play of the quarterbacks, coming into the spotlight once again.

Then One Play Changed The Entire Game

If there is a defining moment, that one play, in the entire game that defines the game and the tempo, it was a muffed punt by Cocoa’s Chauncey Gardner. It would result in a touchdown play from QB Malik Henry to West Orange’s Eddie McDoom the next play for Team Highlight, which would start the run of the shutout.

Chauncey Gardner mishandles ball on punt return and Team Highlight recovers. Garnder then gets beats for a TD. Two bad plays for him.

Gardner Redeems Himself Later On

Chauncey Gardner quickly redeemed himself though later on after the muffed punt, when he made an open field tackle for Team Armour.

Jack Allison Gets His Shine On

Palmetto’s Jack Allison, found himself in the game eventually and with that came some big plays. The first one was a huge pass play that went for 50-plus yards that helped get Team Highlight three points to increase the lead to 10-0 in the second quarter.

Not a bad start for Allison: He threads a pair of defenders to hit A.J. Brown on a curl. Brown goes about 55 yards.

Allison to A.J. Brown on a curl route which goes for 50+. "Allison throws a bullet" says the ESPN2 brodacast

That wouldn’t be all for Allison though.

A #Miami-Miami connection. Dionte Mullins one-hands a pass from Allison for a touchdown. They each hold up a "U" and high five.

However, that touchdown might have not been possible if it weren’t for a fake punt, that happened a few plays earlier.

Highlight gets a first down on a run by the punter. Allison right back out on offense.

Wasn't called either. Props to the punter for knowing the situation. https://t.co/aTiPIYbDoD

All Points In First Half Have Florida Touch

All 17 first half points scored by Team Highlight were scored with a player from Florida involved with Eddie McDoom, Jack Allison, Dionte Mullins and Ricky Aguayo all contributing to those points.

All points so far that have been scored in the Under Armour @AllAmericaGame have been contributed from players right here in FLA! #flhsfb

One of the very few bright spots for Team Armour was St. Thomas Aquinas’ Sam Bruce (despite no balls ever being thrown to Bruce), doing everything he could to provide a spark in the special teams department. One kickoff return in the third quarter did some of that, but it was short lived quickly when Team Armour got nothing as result of it.

Sam Bruce with a nice return to midfield, flashing the speed and lowering his head at the end.

ESPN’s Derek Tyson, spun the story nicely of just how bad things were for Team Armour’s offensive line during the game in this one tweet.

Team Armour O-line getting worked right now. Can't get any passes off.

The result as you know, put zero points on the board for a team that was composed of what is suppose to be some of the best football players in the country.

Team Armour is getting shredded pretty much by Team Highlight…not sure if I have seen worse in a previous UA game. #UAALLAMERICA

Team HL being able to throw the football, TA struggling to move the ball. ST playing a huge part in field position #UAALLAMERICA

With the game getting closer to the final whistle, Team Armour was doing everything they could to get something going. However, as it was all game, Team Highlight’s defense just kept putting pressure on Team Armour’s offensive line and thus resulting in loss of protection for the quarterbacks at times. In the end Patrick Bethel recovers a fumble to seal the deal and end the game.

With that, Team Highlight gets a 27-0 win over Team Armour and posts the first shutout in the game’s nine-year history. However, some feel that the game being moved back to the Citrus Bowl in Orlando helped a lot this year in other ways. And that is something we agree with here at Florida HS Football.

Biggest improvement the @UAFootball All-America game made this year? Moving the game to the Citrus Bowl. MAJOR KEY TO SUCCESS