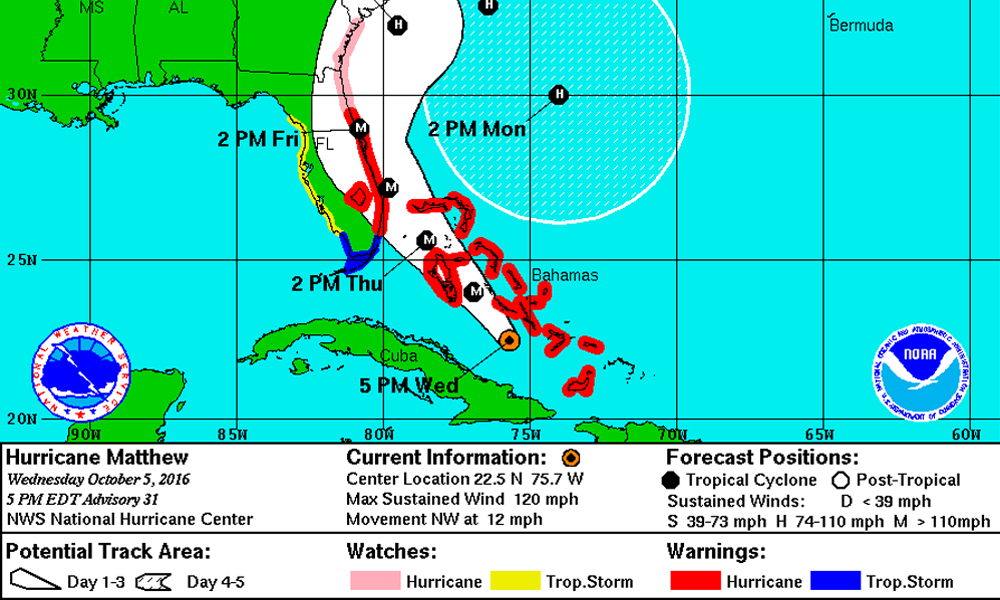 This is a developing story, please check back often for the latest updates.

The latest update from the National Hurricane Center is not a good one for Florida as there is now a projected landfall for Hurricane Matthew early Friday morning near the Kennedy Space Center as a Category 4 hurricane. The projected track also indicates Hurricane Matthew will hug the Florida coast starting Thursday evening and through Friday night.

You can view the current forecast, including position and winds of Hurricane Matthew in the featured image above.

Current Watches and Warning in Florida.

As for game cancellations and reschedules, please check the “Game Reschedules/Cancellations” tab above. That section will be updated as often as possible with updates.

Right now the center of Hurrican Matthew is projected to stay off the coast. The latest forecast track from the National Hurrican Center including Watches and Warnings can be seen in the featured image above.

Also, we have posted a big update in the Game Reschedules/Cancellations section.  There will be more updates to come as verify games that have been rescheduled, pending rescheduling or have been canceled.

Please follow your local media outlets for updates on evacuations and other things to prepare for Hurrican Matthew at this time, but please check back here for the latest updates on high school football games being canceled or rescheduled.

Due to the recent changes in the forecast, Port Canaveral in Brevard County has been ordered to evacuate, according to News 13 in Orlando.

If you are ordered to evacuate here is a list of shelters you can find through FloridaDisaster.org

As of 5:00 p.m. ET, Hurricane Matthew still has winds of 140 m.p.h. and is moving to the north at 9 m.p.h. according to the National Hurricane Center.

However, there has been some changes to the forecasted track as the National Hurricane Center believes that the eye of Hurricane Matthew will hug the Florida coast Thursday afternoon and all day Friday, however, a more definite forecast will not come until tomorrow.

With that the Hurricane Watch has now been extended south to Golden Beach and continues up the coast to the Volusia/Brevard county line, while a Tropical Storm Watch is in effect from Seven Mile Bridge in the Florida Keys to Golden Beach as well as Lake Okeechobee.

Only change to the watches/warnings at 5 pm was to include Broward County FL in the #Hurricane Watch https://t.co/tW4KeGdBFb #Matthew pic.twitter.com/Wd9Eb0aR7O

As for football games being canceled or rescheduled, we are working feverishly on the list to update which you can find on the tap Game Reschedules/Cancellations. Please check back often for updates on this.

Palm Beach first school district in Florida to announce they will close school on Thursday and Friday due to Hurricane Matthew.

As such, all district-related athletic events have been canceled, Jodie Wagner of the Palm Beach Post is reporting.

The School District of Palm Beach County will close Thurs. and Fri., meaning all district-related athletic events are canceled.

The next complete advisory on Hurricane Matthew is due around 5:00 p.m. ET from the National Hurricane Center. We will bring a full and complete update then as we expect more games to either get rescheduled or be canceled in the process.

As of 11:00 AM ET Hurricane Matthew was still packing winds of 145 m.p.h., moving North at 10 m.p.h. according to the National Hurricane Center in Miami. The center of

The center of Hurricane Matthew was located 90 miles South of the tip of Cuba, according to the advisory.

The good news is some parts of Florida have been removed from the cone of concern for the projected path of Hurricane Matthew, but weather conditions are still expected to deteriorate later this week for most of the peninsula.

A direct landfall in Florida, however, is not anticipated at this time, according to the forecasted track.

However, with all of this, parts of the state now have been placed under watches.

A #Hurricane Watch has been issued for Florida from Deerfield Beach to the Volusia/Brevard county line #Matthew More:https://t.co/tW4KeGdBFb pic.twitter.com/6LKqQWEEvX

Also with that comes our first game reschedules of the day.

First, Florida Today is reporting that this week’s game between Holy Trinity and Eau Gallie has been rescheduled for Wednesday evening with a kickoff at 6:00 p.m. ET.

Also, Chris Boyle at the Daytona Beach News-Journal is reporting that Friday’s game between Pine Ridge and DeLand has been rescheduled for Monday.

As of the 8:00 AM ET intermediate advisory from the National Hurricane Center, the forecasted track has the eye of Hurricane Matthew less than 50 miles from the east coast of Florida by Thursday night.

The National Hurricane Center is preparing to issue Tropical Storm and/or Hurricane Watches for part of the Florida peninsula and the Florida Keys later morning, likely with the next complete advisory at 11:00 AM ET.

Tropical Storm and/or Hurricane Watches are likely for portions of the Florida Peninsula & Florida Keys later this morning for #Matthew. pic.twitter.com/Hlk28QE2z9

Right now no games have been canceled at this time, however, some coaches in a few areas are likely to make calls about canceling games sometime today as it appears the track could shift further west with some computer models suggesting a possible landfall in Florida.

Several area football coaches say schools are waiting on the 11 am update before making a decision on Friday's games. #Matthew #TCPrepZone

Told Martin County will not make up it's game with Saint John Paul II if it's cancelled because of #Matthew. #TCPrepZone @CoachKenyon

Now the Sunshine State might be in for its second hurricane of the season and it could literally impact the majority of games for Week 7 with the latest forecast track.

As of 11:00 p.m. ET on Monday night, things were not looking good for the state as the cone of concern or error has now included the majority of the Florida peninsula in the advisory issued by the National Hurricane Center in Miami. This comes on the heels of the 5:00 p.m. ET advisory Monday afternoon that shifted the forecast track to the west.

Florida deeper in the NHC 11 PM "cone" for #Matthew as a major hurricane. pic.twitter.com/giULuuxhyV

11 PM NHC advisory in. Winds up to 145 MPH on Major Category 4 Hurricane #Matthew. Full analysis at 11 on @nbc6. pic.twitter.com/0gRNdwWSca

With all of the changes to the forecast, Florida Governor Rick Scott declared a state of emergency for the entire state.

I have declared a state of emergency in every Florida county due to the severity and magnitude of Hurricane Matthew.

We are working with the EOC and monitoring Hurricane Matthew. Let's hope it stays far away from Pasco County.

.@browardschools is monitoring #HurricaneMatthew and will provide regular updates to our community regarding any impact to our schools.

Also due to the recent changes in the forecast, FloridaHSFootball.com will not be publishing its normal Top 10 Games of the Week feature due to the anticipation of game cancellations.

Unless the track on #HurricaneMatthew changes to take it out to sea, we will not have a Top 10 Games of the Week this week. #flhsfb

If you see a game that is not on this list that has been canceled or rescheduled or see a game on here that needs to have any changes made to it, please email it to football@floridahsfootball.com or leave a comment in the comments section at the bottom of this page (click on the button that says comments).