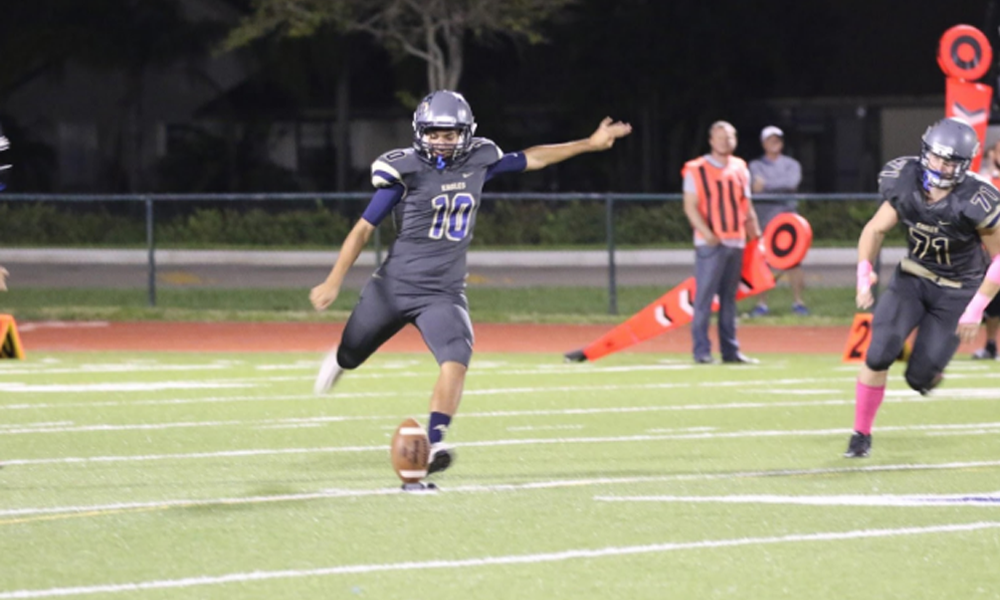 COCONUT CREEK, Fla. – On to the playoffs.

North Broward Prep’s defense came up with two huge stops in the final two minutes of play to clinch a 35-28 win on senior night for the Eagles. John Carroll Catholic (5-5) had driven the length of the field and had a 4th-and-6 from the Eagles’ eight with just over a minute to play, but North Broward’s secondary batted away the pass to give North Broward Prep (8-2) the ball back, up seven with 1:14 to play.

However, after stuffing three North Broward on three straight runs – and taking their three remaining timeouts – John Carroll got the ball back and found themselves with 4th-and-3 at the Eagles’ 14. But North Broward’s defense prospered again, sacking Golden Rams’ quarterback Nick Celidonio to seal the Eagles’ win.

“It’s definitely a nice win for us,” North Broward Prep head coach Rex Nottage said after the game. “Injuries have taken a toll on us these last couple of weeks, and we’ve had some younger guys stepping up and getting some experience, and their confidence is getting better and better each week. I’m proud of the younger guys for stepping up.”

After senior four-year starting running back Dymitri McKenzie broke off a 47-yard touchdown run to stretch North Broward’s lead to 28-7 with just over 10 minutes left in the third quarter, it seemed like the Eagles would run to a blowout victory Thursday night.

Instead, John Carroll Catholic answered with three straight scores to tie the game after Golden Rams’ sophomore quarterback Nick Celidonio hit senior receiver Jamal Polk for a score, Joey LeClaire for another, and sophomore running back Brayden Bytheway rushed in to even it up.

With 9:41 to play, sophomore Christian Paillet found four-star receiver Kevin Austin on a 28-yard strike to put the Eagles up 35-28 and would wind up being the game-winning score.

Austin had well over 100 receiving yards and two touchdowns on the night, including a 50-yard slant pass Austin – displaying his electric speed – took to the house to put North Broward up 7-0 in the first.

Paillet threw an early interception but bounced back nicely with three touchdown passes in what could be his final start of the season at quarterback, with starter Logan Shooster on track to return next week from a hand injury that has sidelined him since October 14th.

“Christian’s confidence has definitely improved,” Nottage said. “He threw some really nice balls. He made one mistake early in the game, but he came back and we capitalized on it.”

The Eagles had 15 penalties on the night – and they were costly – which was their largest total of the season, although there were a few questionable calls by the officiating crew.

“I think the penalties are getting way out of hand,” Nottage said. “I think some of them are not going our way, I have to watch the film, but unfortunately we took the wrong end of it. Hopefully, we can improve upon it because it really hurt us the last couple of weeks.”

Senior Anthony Gomez again stepped up in the spotlight, with lockdown play at cornerback, and a 61-yard punt return for a touchdown in the second quarter, which sent the Eagles into the locker room up 21-7. Gomez has had a handful of punt return touchdowns called back due to penalties and has been stellar for North Broward all season.

North Broward has now let up at least 28 points in five of their past six games and finishes the regular season 3-2 at home.

Thursday was a playoff tune-up for both teams, as John Carroll Catholic will face Clearwater Central Catholic next Friday in the 3A regional quarterfinals, while North Broward Prep will travel to the loser of Friday’s Archbishop McCarthy-Calvary Christian game in the first round of the Gold Coast Conference playoffs next Friday.