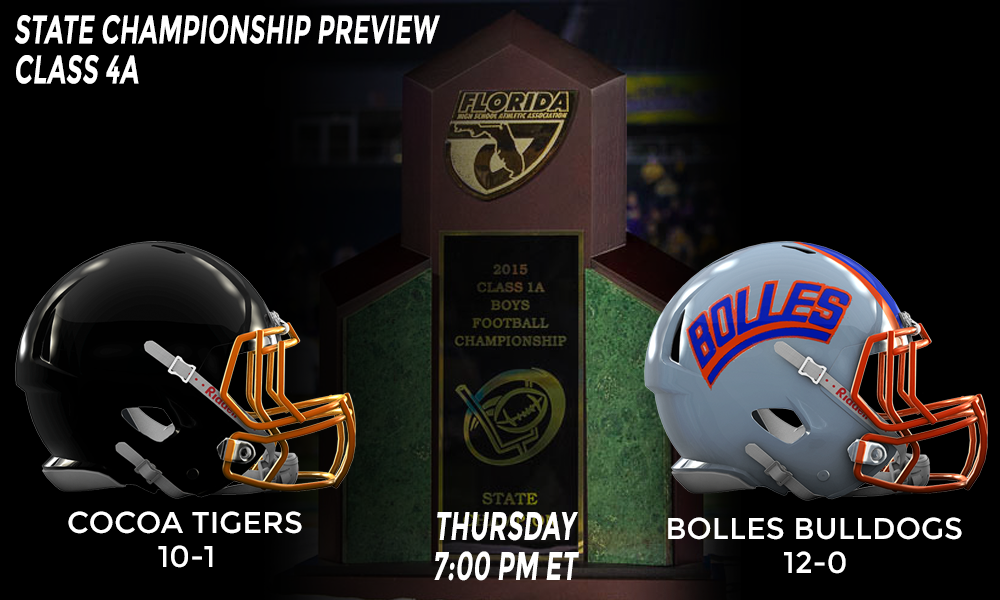 Tickets: $12 ($15 at the gate) general admission / $17 ($20 at the gate) reserved seating — can be purchased through Ticketmaster.com. Gates open 60 to 90 minutes prior to kickoff. All patrons will enter the stadium from Church Street. Parking is $10.

QB Bruce Judson, Cocoa, Sr. — Judson is one of four team captains and is one of the most important offensive players on this team. Passing for 1,163 yards and 16 touchdowns, Judson has been to the go-to guy in the final minutes of games from the start of the season to now. The South Florida commit has been phenomenal on and off the field by scoring points for his team and helping recruit players to USF via social media. In addition to his 67% completion rate through the air, the four-star recruit likes to run; 708 rushing yards and 8 touchdowns on the ground. Keep your eye on Judson, he’ll be all over the field.

RB Jaylen McCloud, Bolles, Sr. — McCloud will cause havoc for the Cocoa defense. Averaging 8.2 yards per rush, leads the team in both rushing yards (1,402) and rushing touchdowns (17). In the State Semifinals against South Sumter, McCloud scored one touchdown and racked up 134 yards on the ground. If the Cocoa defense wants to slow down the running game of Bolles, they’ll need to try to slow down McCloud who’s been averaging 116 yards per game.

QB Mac Jones, Bolles, Sr. — Mac has been a key reason to why the Bulldogs offense has improved each game during the season. As the leader of the offense, he has been able to make it the best for not himself, but for his teammates. Jones has currently passed for nearly 1,500 yards and 22 touchdowns through the state semifinals.

DE Howard Stewart, Cocoa, Sr. — Stewart leads the team with nine sacks for 48 yards lost. The junior will give plenty of pressure to Bolles quarterback Mac Jones. With 69 total tackles, 40 of them solo, he’ll be critical in keeping the total yards for Bolles to a minimum. However, that will be a difficult task as the Bulldogs average 419 yards of total offense per game.

RB/CB Javian Hawkins, Cocoa, Jr. — Hawkins is a dual threat on offense and defense. Offensively, the junior has rushed for 670 yards and 8 touchdowns, his longest run being 65 yards. He’s caught an additional seven touchdowns from quarterback Bruce Judson. Defensively, Hawkins has two interceptions and has one fumble recovery. If Cocoa can get Hawkins going early, he’ll be trouble for the Bulldogs.

WR/RB Amari Terry, Bolles Jacksonville, Sr. — If it isn’t McCloud who is scoring for Bolles, then it’s probably Amari Terry. The senior has caught 37 passes for 781 yards. Averaging over 20 yards per catch, Terry has caught nine touchdowns. Terry also has scored 13 rushing touchdowns totaling for 512 yards. In the State Semifinals against South Sumter, Terry took a punt return 93-yards in the first half proving he’s an explosive threat on special teams as well. Quarterback Mac Jones will look to target Amari Terry early and often throughout the game, especially in the red zone.

The Skinny On Bolles

If you just woke from a 30-year long nap, then say hello to the Bolles Bulldogs. You won’t have to dig deep into the FHSAA Football Championship Result Archive to find that the Bulldogs have won the most state championships in state history at 11. In addition, they have 34 tournament appearances, the most in state history as well. Although they haven’t won since the 2011 4A final in which they defeated Booker T. Washington, 33-25, the team was state runner-ups in 2012, 2013 and 2014, all losses to Booker T. Washington. Head coach Charles “Corky” Rogers has an overall record of (11-5) in state finals games so the Bulldogs have the upper hand on coaching experience.

Offensively, the team is led by quarterback Mac Jones who’s thrown for 1,471 yards and 22 yards. The high-powered offense has outscored opponents 603 to 167 and has only punted 15 times the entire season. Between Jaylen McCloud, EJ Porter, and Amari Terry, the rushing attack has literally run all over defense combining for just over 2,500 yards. Jones has only thrown three interceptions and the offensive line has given up 10 sacks on the year.

Speaking of interceptions, the Bolles defense has picked off opposing quarterbacks 15 different times. Besides the close win over South Sumter in the State Semifinal, the defense has been near perfect. In the 4A Regional Final against Raines, the defense didn’t give up a first down the entire second half. If the defense plays a strong game against Cocoa like they did in the second half of the Regional final, expect Bolles to win its 12th state championship in program history.

The Skinny On Cocoa

They finally did it. After five years of losing to Booker T. Washington in the 4A bracket state semifinals, the Tigers overcame their toughest opponent in the postseason yet, 24-21. Booker T. was the four-time defending 4A state champions and won’t being going for the 5-peat thanks to Cocoa. As for the Tigers, they won three straight state titles from 2008-2010 under head coach John Wilkinson. Every year since 2007, the Tigers have either won the state title or have reached the semifinals. Wilkinson is (3-0) in state final games and is (128-25) overall as head coach of Cocoa. The team has four players who have rushed for more than 650 yards, this includes Lasedrick King who has scored 12 rushing touchdowns.

This season the team faced some pretty tough opponents. It has been a minute but the Tigers upset Trinity Christian Academy in overtime on ESPN2, 26-23. Trinity Christian faces Chaminade-Madonna in the 3A state final Saturday morning. Cocoa’s only regular season loss came a week later out west in Las Vegas against the number team in the nation, Bishop Gorman. Although the score was 19-10 at halftime, the Gaels shut down the Tigers, 46-10. Just last week, Gorman won its 8th straight Nevada state championship. Entering the season, Cocoa had the toughest strength of schedule in the Class 4A according to FloridaHSFootball.com Projections. Bolles wasn’t even in the top ten toughest schedules in the 4A, while Cocoa was ranked 16th statewide in terms of strength of schedule. This experience has shown in the playoffs has Cocoa has outscored opponents 121 to 64, while in the regular season they outscored teams 427 to 177. If Bruce Judson and company want to return to Tiger Trail as state champions, they’ll have to limit the Bolles running game and continue to attack through the air and on the ground.