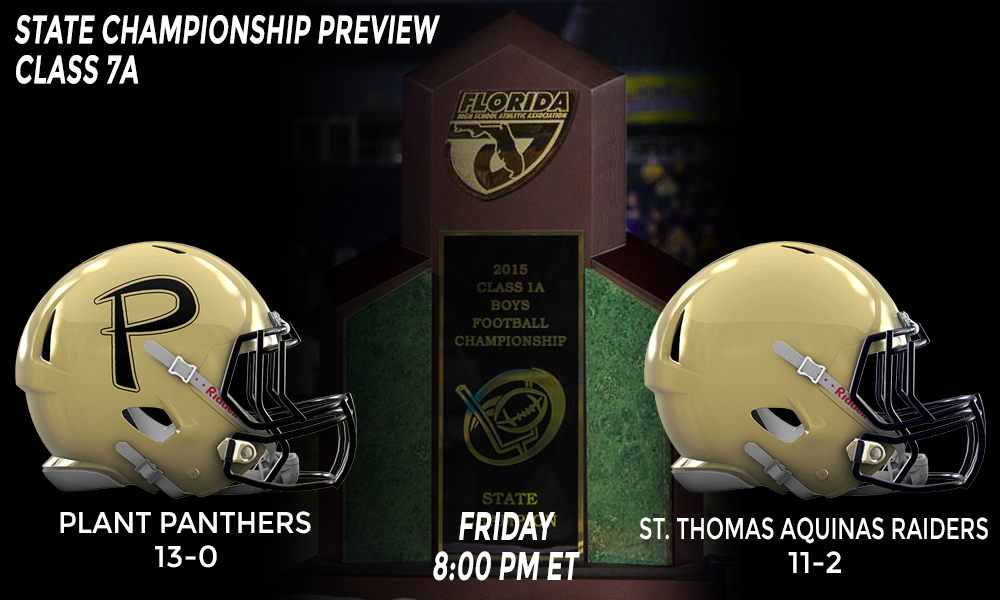 Tickets: $12 ($15 at the gate) general admission / $17 ($20 at the gate) reserved seating — can be purchased through Ticketmaster.com. Gates open 90 minutes prior to kickoff. All patrons will enter the stadium from Church Street. Parking is $10.

QB Jake Allen, St. Thomas Aquinas, Sr. – The Florida commitment led St. Thomas Aquinas back to the state championship game after a season where he threw for nearly 2,000 yards, 25 TD’s with only 6 interceptions. Allen will try to end his high school career with three consecutive state titles.

QB Dante Frantzen, Plant, Sr. – Dual-threat QB for Panthers gained over 3,700 total yards and 49 total TD’s, with 30 TD’s and only five INTs through the air.

The Skinny On Plant

The Plant Panthers have been one of the most successful programs in the state of Florida since Robert Weiner became head coach 13 years ago.  Plant won four state titles in six years between 2006-11, but this is the first trip back to Orlando for the Panthers since the 2011 state championship.  Plant allowed only 145 points in 13 games to this point and had some close calls in the playoffs against Lakeland and Lee.  Frantzen has been a dual-threat stalwart all year, and running back Whop Philyor also helps lead the Plant offense.  This game will be a step up in competition for the Panthers, however.

The Skinny On St. Thomas Aquinas

The Raiders come in on an eight-game winning streak and have moved back to #6 nationally according to USA Today.  Aquinas lost their opening game 27-23 at then four-time defending 4A state champion Booker T. Washington and then dropped a three-overtime heartbreaker in a nationally televised game at Bishop Gorman in week five.  But the Raiders come into this state championship game on fire and have outscored their four playoff opponents by a combined 168-18 with two shutouts.  And Aquinas blasted the third-ranked team in 7A, Venice, 46-8 last week in the state semifinals.  Allen and Epstein lead a balanced offensive attack, and White leads the defense along with Lashawn Paulin, who has 12.5 tackles for loss and 7.5 sacks to lead the Aquinas defense.  This team has D-1 talent all over the field, and despite the fact Plant is also an excellent program, the Panthers haven’t seen anything like this St. Thomas Aquinas team.