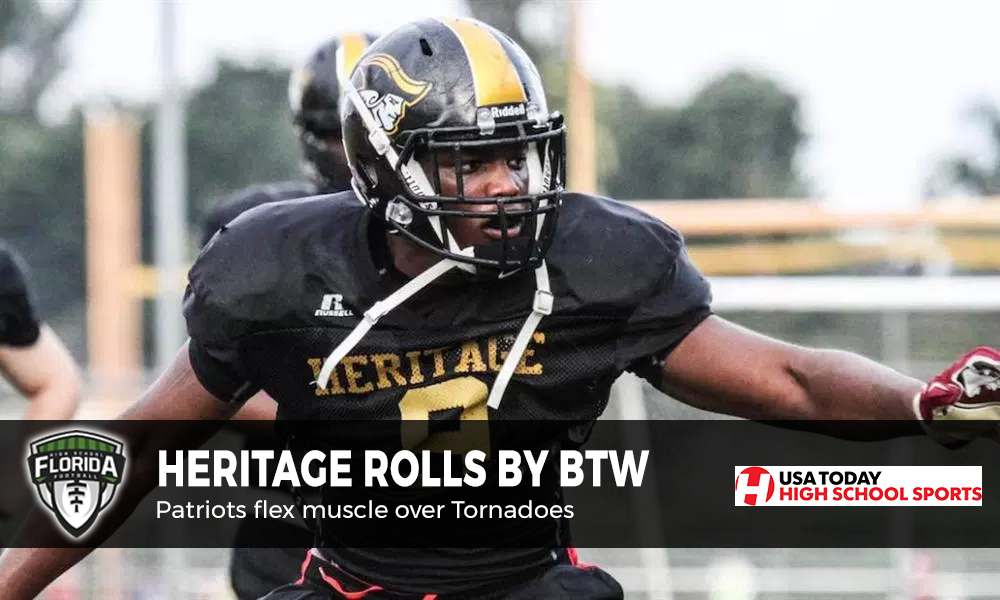 Andrew Chatfield had two first-half interceptions and on the second, he ran 12 yards for a touchdown on the return to put the Patriots up 28-7.

Cam Smith threw a 61-yard touchdown pass to Miles Jones to put Heritage up 35-7 in the second quarter.

Richardson connected on a 33-yard pass to Tyquan Thornton just before the half that cut American Heritage’s lead to 35-14, but the Patriots’ defense forced six first-half turnovers, including five interceptions to nullify Richardson’s nearly 300 yards of passing in the first half.

Booker T. Washington didn’t wait long to score. Richardson connected with Thornton for a 58-yard pass, followed by a 15-yard toss to Ferguson to put BTW up 7-0 early in the first quarter.

Chatfield, a preseason ALL-USA linebacker, helped the Patriots tie the score quickly, however. He picked off Richardson’s pass near midfield. Jordan Johnson then ran 47 yards, setting up a 1-yard keeper by quarterback Cameron Smith for the touchdown.

Miles Jones, a Vandy commit, put Heritage up 14-7 on a 49-yard run just before the end of the first quarter. The Patriots defense struck again at the start of the second quarter as Anthony Schwartz returned an interception for a touchdown to put them up 21-7. Moments later, Chatfield had his pick-six. Jordan Jones ran in Heritage’s final touchdown late in the fourth quarter.

Defensive back Patrick Surtain, another preseason ALL-USA player for American Heritage, left the game early and was icing his right knee, but he said after the game that he felt fine.

American Heritage opens the season officially on the road next week against Bishop Sullivan, Va., while Booker T. Washington travels up the road to open the season against Dillard (Fort Lauderdale).