Home Uncategorized Gaither sprints ahead with early lead and never looks back against Wiregrass... 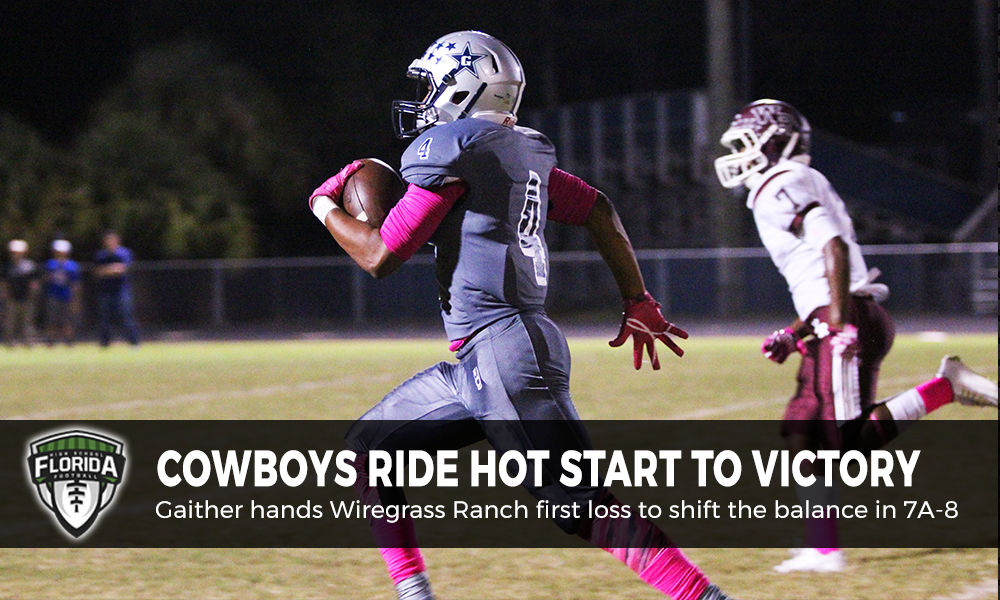 Wiregrass Ranch came into Friday’s matchup as the fifth seed in Class 7A-Region 2 in the first round of FHSAA playoff projections this week, while Gaither was four places out of a playoff spot – a win needed in order to stay in contention in the region.

On Wiregrass Ranch’s first drive, Grant Sessums looked for Penn State commit Jordan Miner on a screen pass. The two connected, however, Gaither forced a fumble and took possession inside Wiregrass Ranch’s 30-yard line. Jeromy Reid ran for some tough yards, including a 17-yard rush in between the tackles to put the Cowboys within striking distance.

Shaye Scott took a fourth-down quarterback sneak in from a yard out to give Gaither an early 7-0 advantage.

A quick three-and-out for Wiregrass Ranch gave Gaither the ball back for the second time before the midway point of the first. One play was all Reid needed to turn an off-tackle run into six points, going 62 yards to paydirt, giving the Cowboys a big, early, 13-0 lead.

Wiregrass Ranch wouldn’t go down lightly. Sessums opened up the passing game with a 30-yard dart to Daniel Biglow over the middle to set the Bulls up in the red zone for the first (and one of the only) time of the night.

The Bulls got on the board thanks to a powerful eight-yard rushing touchdown from Adrian Thomas. A missed PAT kept it at 13-6 in favor of Gaither.

On the ensuing Cowboy drive, head coach Kirk Karsen gambled by going for it on fourth down twice. The first was a beautifully executed direct-snap fake punt from Chase Cregan. A few plays later, Z Williams took an end-around on fourth down 30-yards to give the Cowboys their third first-quarter touchdown and with it, a 20-6 lead.

In the second, the scoring slowed down as Wiregrass Ranch played a better defensive quarter, neutralizing the Cowboy running game. For Gaither, Carlos Chicon Jr. intercepted Sessums to snuff out a threatening Wiregrass Ranch drive.

Gaither retained its two-touchdown lead at the halftime break.

There would be no scoring until eight minutes into the third period, where David O’Neal banged home a 20-yard field goal to put Gaither up 23-6.

Two minutes later, Sessums threw up a deep ball to A.J. Thomas down the left sideline for a 33-yard score on a spectacularly executed fly route. Gaither’s lead was cut to ten.

The Bulls tried to do everything they could to get back into the end zone, including a trick play as Miner looked to throw down the right sideline, but a contested ball went in the favor of Cayden Jordan, who intercepted it for the Cowboys. The two teams traded drives as Gaither looked to hold on defense and seal the victory.

When the final horn sounded, things got chippy before the handshake line. There was pushing and shoving between a couple of the Bulls and Cowboys, and both sides had to be separated by referees and local police.

As of Sunday morning, there have been no suspensions given for the incident.

“It’s disappointing because it was a hard-fought game between the kids and we didn’t even get to shake each other’s hands,” Karsen said. “I know Mark [Kantor] doesn’t run a dirty program, sometimes the kids’ emotions just get out of check and we have to do better jobs as coaches to try and keep them in check.”

Reid’s 62-yard rush was part of a good game on the ground for him on Friday. Jaedin Andrews carried the ball for a few nice rushes in the second half. Thomas’ quick bursts and good ability to follow blocks made him a reliable ball carrier for Wiregrass Ranch throughout the affair. He’s filled the hole created by Da Da McGee’s transfer to Hillsborough quite well.

Karsen did some interesting on offense with some direct snaps and option plays to Jordan, giving Scott a rest every now and again. Scott had a good night keeping the offensive tempo consistent and he manages the game very well. Sessums threw the ball effectively for Wiregrass Ranch and threw some well-thrown deep passes.

The matchup between Jordan and Miner was one of the most fun to watch on the night. Whether on offense or defense, they matched up on each other well all night. Matt Wood was a force along the Gaither linebacking corps and he opened up a lot of opportunities for his teammates to make plays. Kyle Mason consistently got in the backfield from the defensive end position.

With the win, Gaither should improve in the 7A-Region 2 standings, while Wiregrass Ranch could potentially drop out of a playoff seed. The FHSAA will release updated standings later in the week.

“I told the kids today that we are in an every-game playoff. We’re in the playoffs right now. Every game matters with the new way that things are done. We put ourselves in a hole with losses against Plant and Chamberlain and now we have to dig ourselves out of it by winning every week.” Karsen said.

Wiregrass Ranch will look to rebound from its first loss when they take on Freedom (Tampa) next week. Gaither hosts Sickles in another important 7A-District 8 matchup.

On a side note, congrats to @matchewbacca50 and @donovan_blu (not pictured) on being selected to the @GaitherCowboys' Sr. homecoming court! pic.twitter.com/WG8bQNt6LZ