Home Playoffs Raines breaks the 20-year drought, squeaks by Cocoa for the Class 4A... 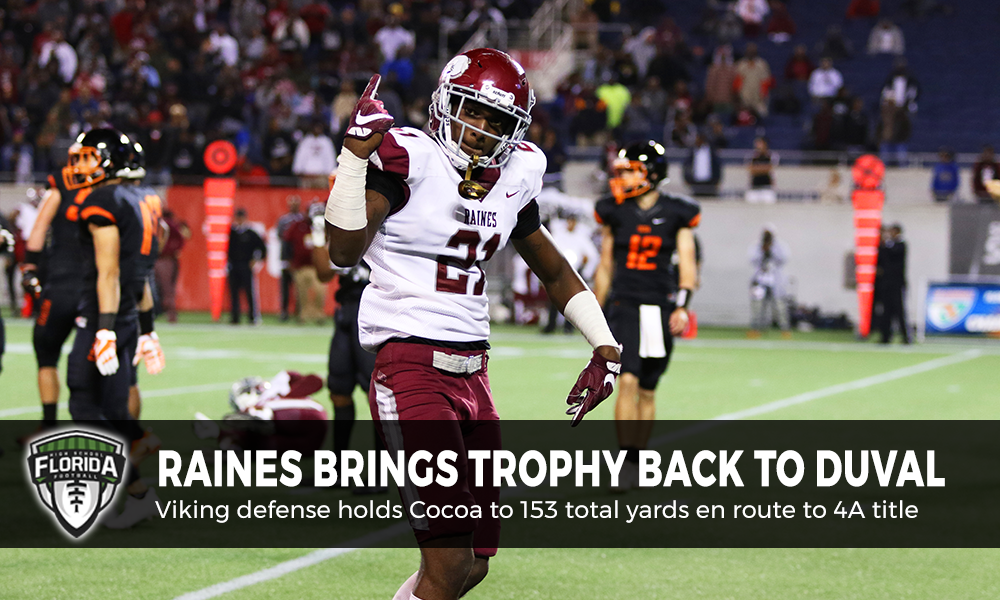 ORLANDO, Fla. — In a game that was considered to have the two best in Class 4A most of the season, it might have shown one was truly better than the other that was not projected at all.

In the end, it proved to be right as the No. 2 team in Class 4A, the Raines Vikings took down the No. 1 team in the Cocoa Tigers, giving Raines their first state championship in 20 years while denying Cocoa a bid for a repeat.

But the game was by no means pretty.

Mistake-ridden performances from both teams made the heated contest between two talented offenses rather unexciting after an ugly 6-3 lead for Raines in the first half at Camping World Stadium.

“The Land of Missed Opportunity” would surely be a fitting nickname for what onlookers witnessed Thursday night.

Raines got the ball first to start the game and despite sensational play from senior quarterback Ivory Durham IV, the Vikings were stopped on fourth and one by Cocoa.

After both teams traded punts, Raines got on the scoreboard first with an electric 72-yard run from junior running back Brandon Marshall, but only went up 6-0 after failing to convert the PAT.

As for Raines’s time occupying the land of missed opportunity, it mainly had to do with their untimely penalties.  Many of their drives were stymied by late penalties that would set their offense back and take them out of manageable situations.

However, both defenses were on their A-game throughout most of the first half.

Cocoa’s blunders were as a result of Raines’s defensive performance.

Early in the first quarter, Cocoa didn’t connect on two deep heaves that could have ignited the offense, part of the overall offensive woes that caused the Tigers to stumble during the game.

Cocoa, however, connected on a 35-yard deep ball from Bradley Cantrell to Rashean Lynn.  This was Cocoa’s only completed pass in the first half.  But, it was back to the mistakes they went, as Javian Hawkins followed that pass up with a fumble just mere feet away from the end zone that can be circled as a game changer for both teams.

Then, to close out the half, after causing a Raines fumble, taking over at the 24-yard line, and then losing yardage on three straight rushes up the middle.

The Tigers were then faced with a 4th and 15 at the Viking 29 yard line and elected to kick the field goal with Junior Alex Petruzzello nailing a 46-yard field goal right before the end of the half to get Cocoa on the scoreboard and put things solidly in range, as they went to the half down 6-3.

In the second half, things didn’t get much better, at least at first.

Cocoa was forced to punt after just five plays that went for a total of 12 yards.

The Vikings, wanting to outdo their counterparts from the Central Florida, punted after a seven play, thirty one-yard drive.

Continuing the trend of missed opportunities, Raines had outgained Cocoa 201 to 68, yet were still only up by three halfway through the third. Just like the first half, neither team could get much going on offense.

Cocoa came into the game with one of the top rushing attacks in the state, led by backs Javian Hawkins and Willie Gaines, each with over 1,300 yards on the season. But at the end of three quarters, the Tigers had 28 yards on only 24 attempts.

Despite this fact, and with Raines outplaying Cocoa in all facets of the game, the score was still sitting at 6-3 heading into the fourth quarter and was still anyone’s game.

The Tigers finally had some life early on in the fourth quarter.

They had Ivory Durham running for his life and forced a Raines punt from their own end zone, getting the ball on the Vikings 40.

Willies Gaines, who had been quiet the entire night, busted out a 32-yard run on the first play of the drive to bring Cocoa inside the the Raines 10-yard line. One six-yard Javian Hawkins run later, and the Tigers had third down and goal with only six feet separating them and the goal line.

For the first time all game, a team cashed in on a scoring opportunity.

Willie Gaines took a sweep around the edge on third and two into the end zone to put Cocoa up 10-6 with 9:06 left to play. The way both teams were playing, it began to look like an insurmountable lead.

That is, until Durham had something to say about it. Durham led an 82-yard drive for the Vikings which culminated on an 8-yard touchdown on third and goal. Brandon Marshall was a big playmaker for the Vikings, getting two key first downs to keep the drive alive.

Cocoa got the ball back with five minutes remaining and tried to regain momentum.  This didn’t go as planned, as they began their drive with multiple delay of game penalties.

After an ineffective offensive drive, quarterback Bradley Cantrell heaved a pass deep that fell into the arms of Raines defensive back Javon Bosnell, only to be overturned by a roughing-the-passer penalty. Cocoa continued a long drive, which included multiple penalties and a reliance on their running game.

Cocoa drove the ball to the 32 yard line, which set up a chance on 4th down for the Tigers to, at the very least, put themselves into field goal range.

They did not convert.

Raines took over with little over 40 seconds remaining and Cocoa had no timeouts.  Loud, rowdy, jubilant celebrations began on the Vikings sideline and in their stands. It was a magnificent sight.

In a game that was dominated by defense, turnovers, penalties, and missed opportunities, the Raines Vikings ended up coming away with a hard-fought win 1310 for their first state championship win in twenty years.

At end of the night it was the cheers of fans from Jacksonville that ranged loud in the stadium.

“We did our job tonight” said Raines head coach Deran Wiley “I just believed that we could do it.