Home Around The State 2017 FLORIDA ALL-STATE: Class 7A Player of the Year Candidates 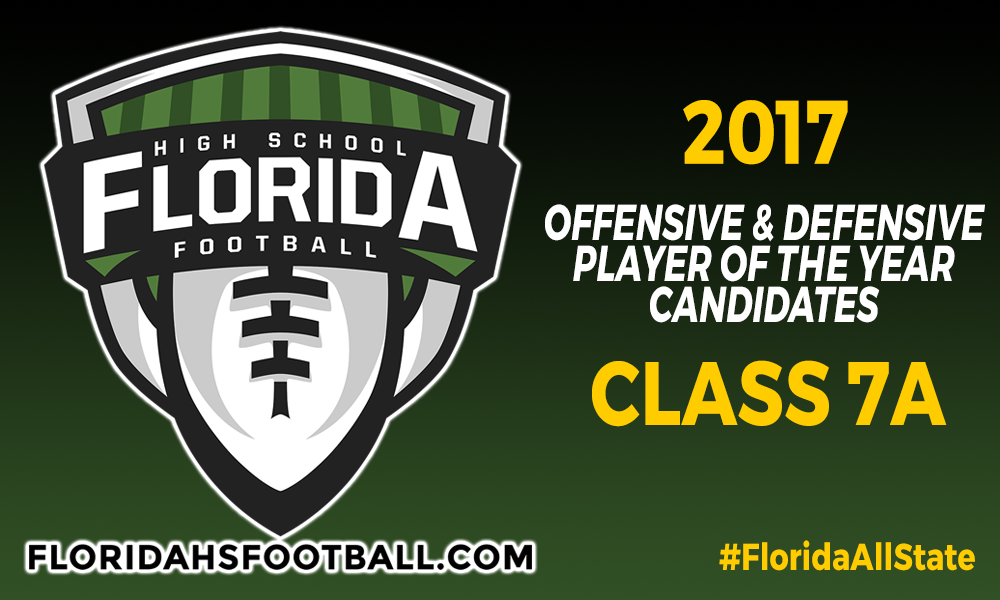 Without further ado, here at the candidates for 2017 Class 7A Player of the Year:

• QB Bryce Carpenter, Sr., Venice – One of the most prolific quarterbacks in the state, leading the Indians to their first state championship in 18 years, Carpenter burned opposing defenses through the air or on the ground, passing for 3,053 yards and 42 touchdowns, while rushing for 1,274 yards and 22 touchdowns. That is 64 touchdowns that Carpenter was responsible for during the 2017 season.

• WR Jaivon Heiligh, Sr., Venice – The nation’s leading receiver in receiving yards during the 2017 season, Heiligh was the favorite target for Bryce Carpenter, hauling in 131 catches for 2,159 yards and 32 touchdowns.

• QB/ATH Joey Gatewood, Sr., St. Johns Bartram Trail – Part of a rotating quarterback feature for the Bears, Gatewood, made the most of his senior season passing for 1,468 yards and 12 scores, while rushing for 1,100 more yards and 16 touchdowns, all while leading helping the Bears to their first state championship game appearance in school history.

• DL Miguel Rodriguez, Sr., Melbourne Viera – One of the key parts to the Viera defense, Rodriguez closed off his senior season strongly with 80 tackles, 19 sacks, five tackles for loss, four forced fumbles, one safety and one blocked kick.

• LB/UT Ryan Smenda, Sr., Orange Park Fleming Island – The Mr. Do Everything for Fleming Island, Smenda was all over the field for the Golden Eagles, racking up 175 tackles, 12 tackles for loss, three sacks, two interceptions, 10 pass breakups, plus rushing for six touchdowns on offense, blocking four field goals, three punts and hoisting a 38.8 yard punting average.

• DB/UT Jordan Miner, Sr., Wesley Chapel Wiregrass Ranch – Another Mr. Do Everything for his team, staying out on the field more than anyone else for the Bulls, Miner, stood out as a lockdown corner, averaged more than 19 yards per punt return and more than 26 yards per kick return; He finished the season with 1,183 all-purpose yards; six rushing touchdowns, three receiving touchdowns, one passing touchdown, four interceptions and five pass breakups.