Home Around The State 2017 FLORIDA ALL-STATE: Class 8A Player of the Year Candidates 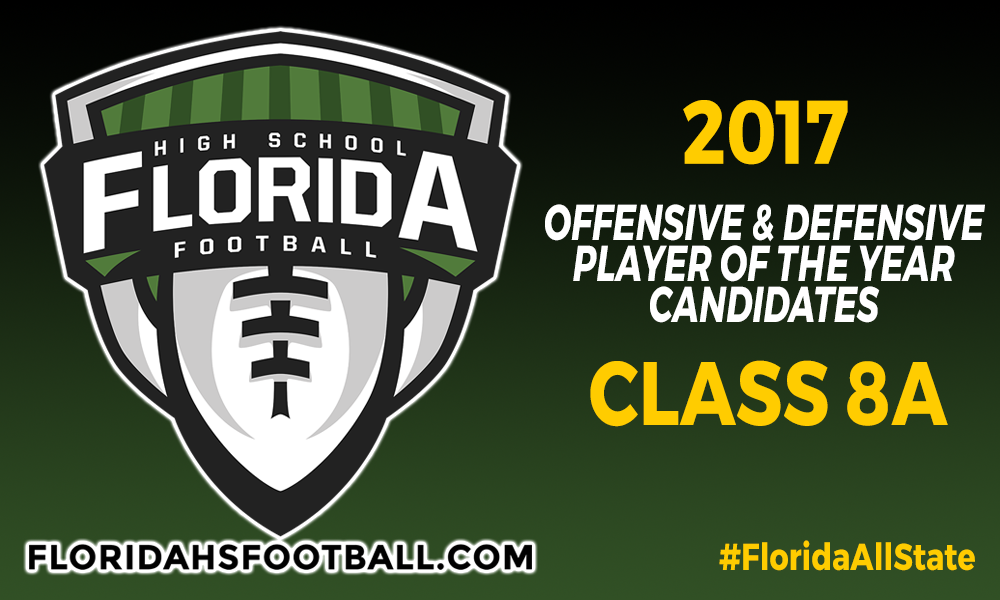 Without further ado, here at the candidates for 2017 Class 8A Player of the Year:

• RB Lorenzo Lingard, Sr., Orange City University – The leading rusher in Class 8A this season, Lingard carried the ball 207 times for 1,701 yards, scoring 26 times throughout the season despite some weeks playing two games in a span of three to four days due to Hurricane Irma’s impacts.

• QB Isaias Castellon, Sr., Miami High – The top quarterback in Class 8A this season, Castellon, led his team to what most saw as the impossible in reaching the Class 8A state semifinals. During that run during the season, he threw for 2,853 yards and 34 touchdowns.

• WR Demarcus Harris, Jr., Vero Beach – The only wide receiver in Class 8A to break 1,000 yards receiving (1,001 to be exact), Harris was a big contributor in Vero Beach reaching the regional finals. He hauled in 43 catches while scoring 11 times for the Indians.

• LB Jaquarri Powell, Jr., Dr. Phillips – The other half of the Powell twins for Dr. Phillips, Jaquarri finished the season with 116 tackles, 28 tackles for loss, nine sacks, two forced fumbles, one fumble recovery for a touchdown and three pass breakupss.

• Tyler Davis, Jr., Apopka Wekiva – A monster on the defensive line for the Wekiva Mustangs, Davis was unapologetic to opposing quarterbacks taking them down 21 times on sacks, while collecting up 100 tackles and forcing three fumbles in a historic season for the 11-year school in Apopka.

UNDER THE LIGHTS: PLAYOFF HIGHLIGHTS: Columbus vs. Miami High

UNDER THE LIGHTS: PLAYOFF HIGHLIGHTS: Osceola (Kissimmee) vs. Dr. Phillips