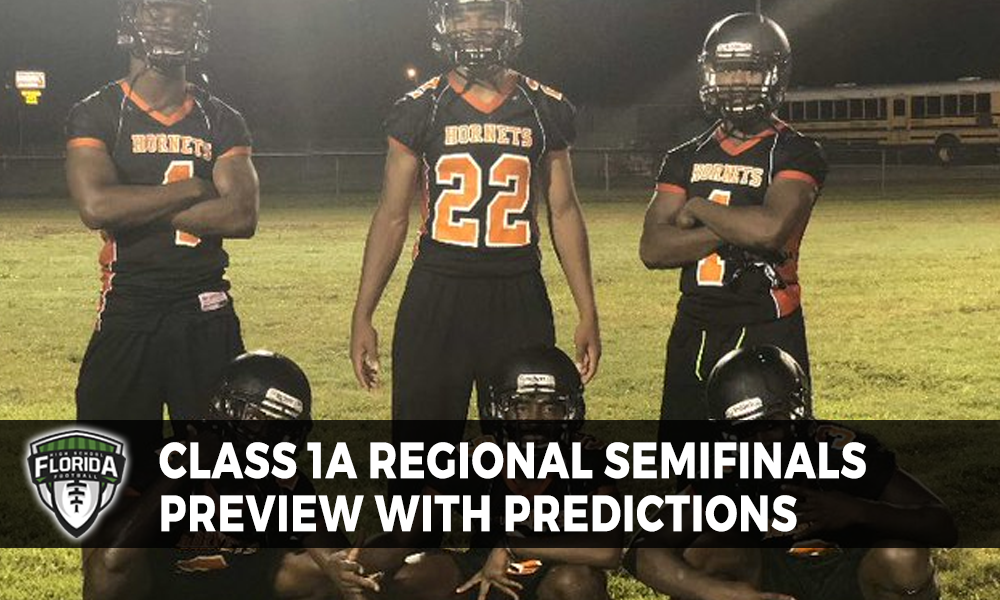 In the rural Class 1A classification, anything can happen on any given Friday night. That is why with the regional semifinals here, all eight games will have to be watched closely because the games are won in the trenches in these small towns and they truly do leave it on the field.

This would be the 74th meeting for both teams going back to 1950 if they were to have met in the regular season as scheduled, but ultimately canceled due to the Hurricane Michael … in the 72 meetings on record since 1950, with playoffs included, according to Florida high school football historian Richard Burton, the visiting Tigers hold a tight 38-32-2 lead on the series over the host Sharks … This game will have a lot more meaning it to it than just a playoff game as both teams were severely impacted by Hurricane Michael just over a month ago … Last week Blountstown defeated No. 5 seed Cottondale 28-6 in a game that was played at Liberty County in Bristol as Blountstown’s own football stadium was partially destroyed by Hurricane Michael … Port St. Joe easily took care of business last week against No. 8 seed Liberty County, posting a 69-0 shutout … This matchup pits former Blountstown and current Port St. Joe head coach Greg Jordan against one of his longtime assistants, who is now the head coach for the Tigers, Beau Johnson … Watch out for quarterback Trent Peacock for Blountstown as he is a dual-threat type quarterback as he scored three touchdowns last week (two rushing, one passing), plus converted two, two-point conversion (one on the ground, one through the air) … Athletes to keep an eye on for Port St. Joe include Khayyan Zacarro, Josh Butts, and Joel Bogaert who were some of the biggest contributors in last week’s win.

For many years both teams were a part of the same district until districts were scrapped in the lower classifications last year with the new playoff points system … Now both teams will be meeting for the first-time ever in the postseason … However, both teams met earlier in the season back in Week 9, a game that Baker dominated, winning 35-7 … Last week the visiting Chiefs easily took down No. 5 seed Graceville, 40-14 … The host Gators easily defeated No. 8 seed Freeport, 49-21 … Keep eye on quarterback Shane Hardin as he will be a key factor if Northview wants to upset the top-seeded Gators … For Baker, watch out for the strong legs of Junior McLaughlin who broke free in last week’s game, rushing for 277 yards, scoring four times. Prediction: Baker 40, Northview 21

This will be the second playoff meeting between the two teams … Jay won the last postseason meeting way back in 1978, 28-20 … Last week Jay won its first playoff game in 16 years when it defeated No. 6 seed Bozeman, 49-0 … Vernon bested No. 7 seed Chipley easily in shutout fashion, 40-0 … For the visiting Royals, keep an eye on tailback James Eddings who had 151 yards rushing and four scores in last week’s win … For the host Yellow Jackets, watch out for the legs of K’wan Powell who has been their biggest weapon this season. He scored two touchdowns in last week’s win. Prediction: Vernon 38, Jay 20

This is a regular season rematch from Week 2 … Jefferson County won the first meeting this season, 34-15 … This is the first-ever playoff meeting between both teams … Last week the visiting Tigers ran past No. 6 seed Wewahitchka, 35-14 … The host Pirates took down No. 7 Franklin County, 55-28 in last week’s opening round game … With a two-quarterback system in use at Jefferson County, it will be important to keep an eye on both Javion Patrick and Josh Aiken along with their favorite receiving target, Da’Shon Davis … For Sneads, things on offense will be led by running back Calvin Stringer who has had a strong offensive line this season to help lead things. Prediction: Jefferson County 35, Sneads 21

This will mark the first playoff meeting between the two teams … Last week Lafayette defeated No. 6 seed Union County, 34-30 … Madison County had a first-round bye and finished the season in Week 11 with a 28-0 win over Rickards … For the visiting Hornets keep an eye on quarterback Jaxson Beach who has already thrown over 2,000 yards this season. Last week he threw for 150 yards and two touchdowns going 15-of-25 on passing, but also rushed for two more touchdowns as well … For the host Cowboys keep an eye on quarterback Travis Jay who can beat teams through the air (1,095 yards passing, nine touchdowns), but on the ground as well (719 yards rushing, 17 touchdowns). Prediction: Madison County 38, Lafayette 20

The heated US 19 rivalry gets a rematch game this season … Chiefland won the first meeting back in Week 5, 27-20, in Cross City … This will also be the first postseason meeting between the two rivals … Last week the visiting Bears easily ran past No. 6 seed Branford, 39-6 … Chiefland had a bye week last week and closed out the regular season in Week 11 with a 31-14 win over Williston in the battle for the Levy Cup … Keep an eye on Fitzgerald Warren for Dixie County as he rushed for 144 yards and three scores in last week’s win … For the host Indians, watch out for quarterback Ty Corbin to do a lot of the damage (732 yards passing, nine touchdowns; 393 yards rushing, 12 touchdowns) as well as running back Kirk Williams (83 carries, 858 yards rushing, five touchdowns). Prediction: Chiefland 31, Dixie County 24

This is the first playoff meeting between the two programs … Last week the visiting Raiders took down one of Polk County’s well-known teams in the Fort Meade Miners, 22-6 … The host Hornets were on a first-round bye and closed out the regular season in Week 11 with a 65-0 win over Bronson, the regular season undefeated … Keep an eye on quarterback Nykee Scott for Crescent City as he accounted for three touchdowns in last week’s win (two rushing, one passing) … For the Hornets with a variety of weapons, quarterback Kahleil Jackson is the one to watch as he has over 2,300 yards passing to go along with 38 touchdowns … Jackson also has seven rushing touchdowns on the season. Prediction: Hawthorne 42, Crescent City 20

POLL: Who wins on Friday night?

This meeting marks only the third time that the teams have met in the playoffs … Playoff series is tied at 1-1 with the last meeting coming back in 1993 … Last week Wildwood upset No. 3 seed Frostproof in a revenge game from last year’s meeting, 28-27 … Pahokee was on a first-round bye last week and finished the regular season in Week 11 with a loss to Glades Central in the annual Muck Bowl rivalry, 22-12 … Nate Mickell and Marcus Nilback will be two key players to keep an eye on for the visiting Wildcats … For Pahokee, a couple of key pieces of talent are out for this game, so there is a chance that this game could be closer than some expect. Prediction: Pahokee 38, Wildwood 20

POLL: Who wins on Friday night?

Last Week’s 1A picks record: 11 correct, 1 boo out of the stadium