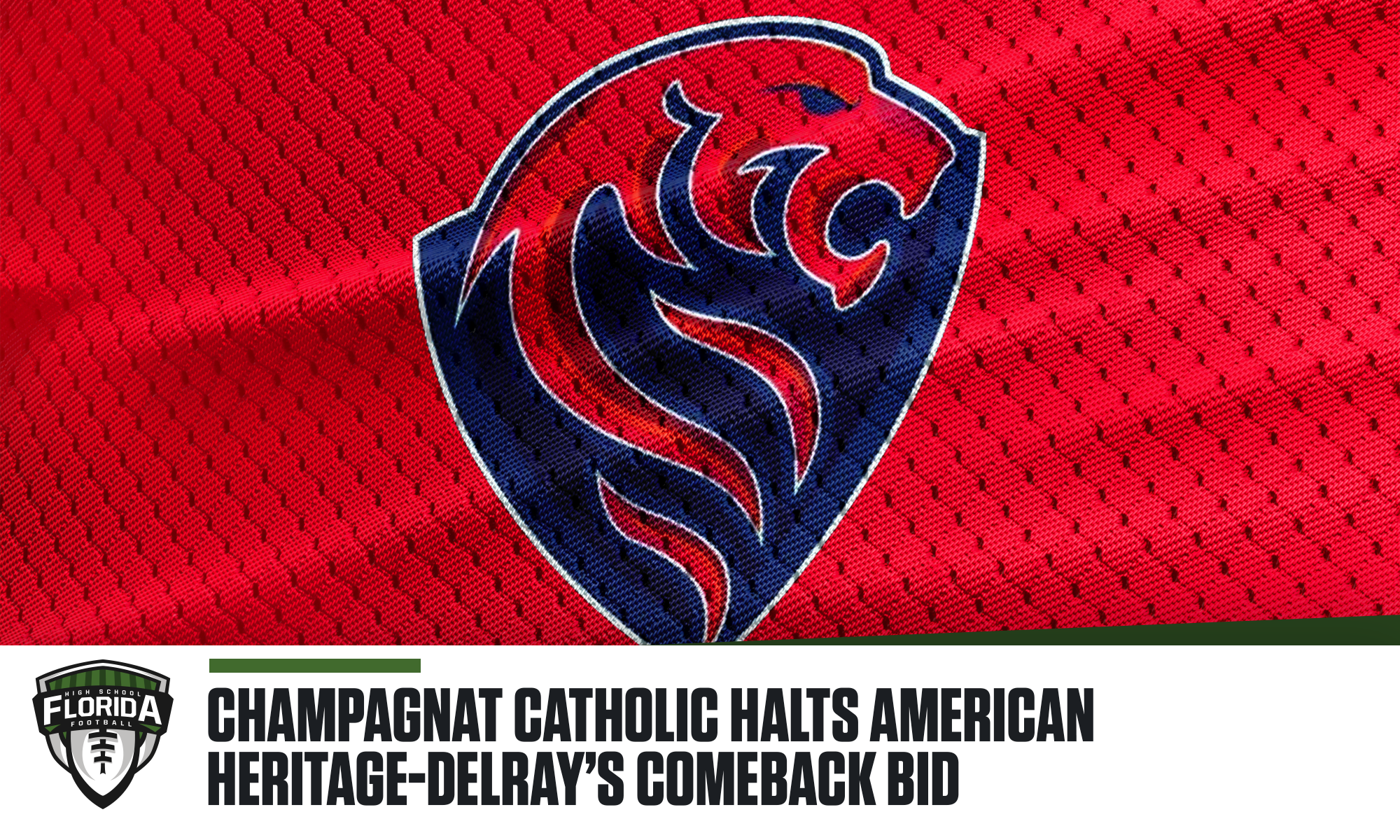 Champagnat looked to put the game away before halftime and came out with a strong defensive showing in the third, all but sealing the deal. However, the Stallions fourth-quarter comeback will be one to remember, despite still losing 33-27.

Champagnat came out fighting from kickoff. Quarterback Tyous Taylor connected with Benson Prosper on the second drive of the game for the first score of the night.

Taylor and Prosper snuck in another touchdown just before the second quarter.

Another #1-#12 connection for a Lions #TOUCHDOWN 13-0one minute left in the 1st pic.twitter.com/snyewCSYbJ

American Heritage – Delray managed to get on the board early in the second, thanks to a 35-yard touchdown run from quarterback Dylan Rizk. Then, the Lions found their killer instinct.

Running back Donovan Jones found the endzone to put Champagnat up 20-7. Taylor hit Jones for the Lions’ fourth touchdown of the night shortly after.

Just before halftime, Taylor continued his phenomenal run. This time, the quarterback targeted Keshan Brown to sit with a comfortable 33-7 lead. Champagnat’s Malik Allen picked off in the red zone right before the buzzer.

And that’s an interception by Senior #13 Malik Allen as your #Champagnat #Lions head into Halftime up 33-7 over the #Stallions #VamosLeones #CoopBoyz #OnTheRise pic.twitter.com/irKLXprGg7

When the game resumed, the Lions’ defense followed Allen’s lead. This time, Antwan Gisme got an interception, and William Jeudy notched a fumble recovery.

While Champagnat did not score in the third, the team did bring out eighth-grader Enio Yapoor at quarterback, who picked up the first down.

The resilient Stallions did not get dejected, though. The team put together a scoring drive early in the fourth quarter. However, the extra-point attempt was blocked by Lions defender Darnell Georges.

At this point, a team can do one of two things. A team can allow its opponent to embarrass them, or a team can give itself a fighting chance to close it out. And oh, did American Heritage – Delray chose the latter.

The Stallions put up two touchdowns, including the one below, with 4 minutes left in the game.

Unfortunately, the comeback kids did not make it all the way and fell 33-27.

Champagnat, now 4-2 on the season, looked like one of the better teams in the state until the fourth quarter. Tyous Taylor continuously demonstrates the ability to create opportunities and scores. A bevy of offensive weapons surely helps him out, too. The defense, while strong in the third quarter, showed some lapses that have proven to hold Champagnat back against some of the bigger-name teams, and almost caused the Lions to sink to 3-3.

Next up, they’ve got Doral Academy. If the offense can remain fiery for four quarters and the defense stays alert, the Lions can put together a nice remainder of the season.

Next up, they’ve got Clewiston, which is more akin to Champagnat, although maybe not as talented. Certainly a winnable game. Let’s see if the Stallions can capitalize on what they have going, which is pretty good.