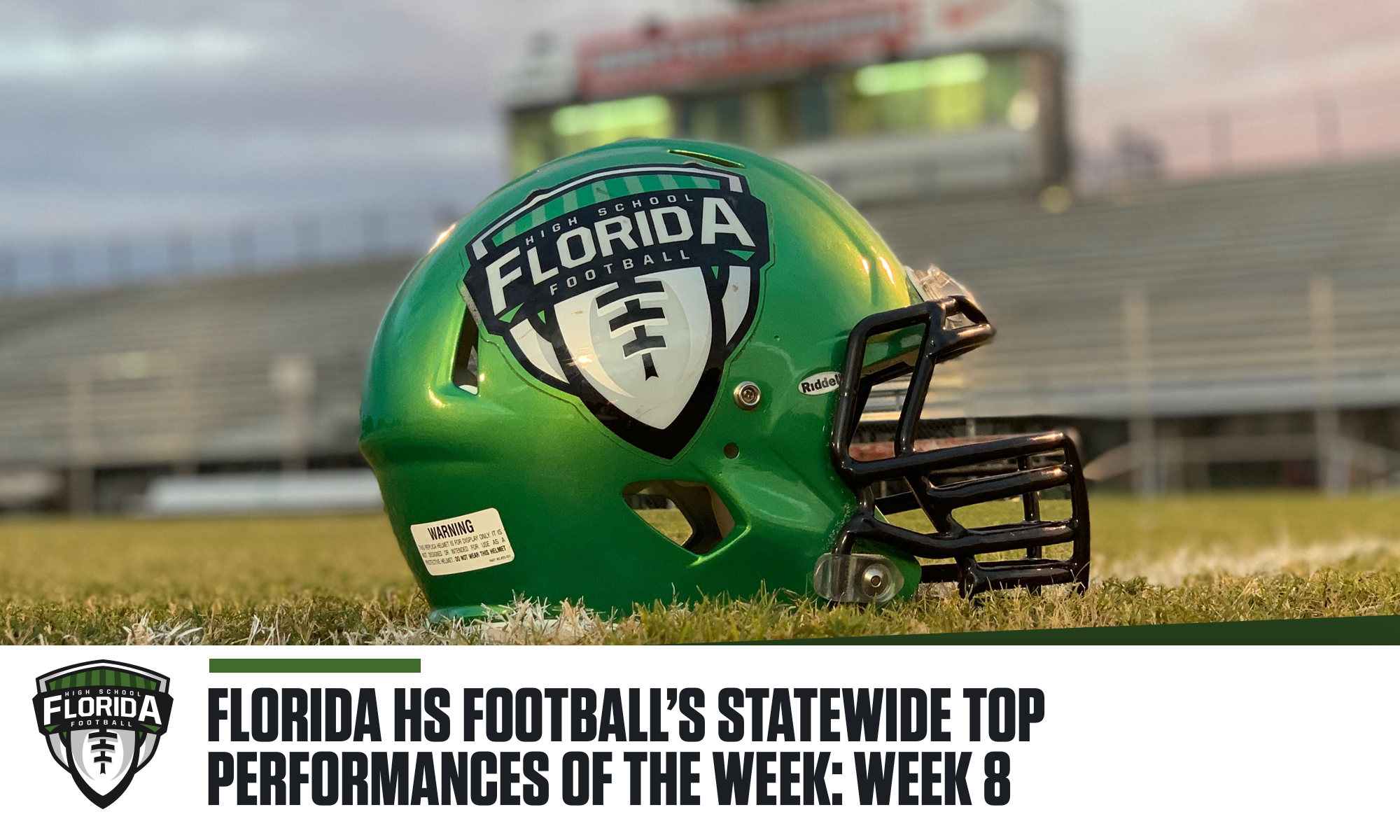 We have another great list of top performances from 11-man and 8-man football to present to you. Check out who made the list of FloridaHSFootball.com’s Statewide Top Performance for Week 8.

QB Jaquan Lowman, Apopka – Had 197 yards of total offense and scored two rushing touchdowns for the Blue Darters in their bounce-back 29-0 win over Evans.

RB Joe Brunson, Baker – Rushed for 217 yards on 26 carries and scored three times in the Gators’ 35-6 win over Graceville.

RB C.J. Campbell, Bay – Rushed for 239 yards and scored three touchdowns as well as recorded a touchdown on a kickoff return as well as two-point conversion in the Tornadoes’ 52-28 win over Bozeman.

QB Tre Simmons, Bloomingdale – Went 14-of-21 passing for 210 yards and two touchdowns plus had nine carries for 62 yards rushing and a touchdown in the Bulls’ 39-14 win over Lakeland.

RB Kade Frew, Bolles – Had 19 carries for 203 yards rushing and three touchdowns for the Bulldogs in their 33-19 win over University Christian.

LB Jack Pyburn, Bolles – Had 12 tackles, four tackles for loss, and two sacks in the Bulldogs’ 33-19 win over University Christian.

RB Erric Smith, Bradford – Had 19 carries for 207 yards rushing and scoring three touchdowns – two rushing and one receiving – in the Tornadoes’ 36-6 win over Palatka.

DB/WR Gavin Martinez, Cambridge Christian – Had seven tackles, three pass breakups and collected an interception on defense plus added five catches for 46 yards on offense in the Lancers’ 14-11 win over Carrollwood Day.

DE Mason Thomas, Cardinal Gibbons – Collected 10 tackles, three tackles for loss, a sack for a 28-yard loss, and returned a 15-yard interception as well as recover an onside kick in the Chiefs’ 17-10 upset win over nationally-ranked St. Thomas Aquinas.

QB John Busha, Charlotte – Had a record-setting night for the Tarpons going 13-of-21 passing for 275 yards and a touchdown plus had 23 carries for 196 yards rushing and three more touchdowns totaling out 471 yards off offense in a 31-28 win over Port Charlotte.

LB Zac O’Connor, Christ’s Church Academy – Collected a safety and recovered a fumble for a scoop and score in the Eagles’ 15-6 win over Wolfson.

RB Andrew Partyka, Christ’s Church Academy – Had 21 carries for 105 yards and a touchdown in the Eagles’ 15-6 win over Wolfson.

RB Al’querious Ray, Clay – Had 18 carries for 283 yards rushing and five touchdowns for the Blue Devils in their 56-28 win over Middleburg.

WR Oran Singleton, Clewiston – Had eight catches for 100 yards and two touchdowns on offense plus had an interception and recovered a fumble for a scoop and score on defense as well as scoring the game-winning touchdown from pulling a high-snap down and running it in in the Tigers’ 29-24 win over American Heritage (Delray).

DL Dajavon White, Cocoa – Collected six tackles including four behind the line and intercepted a pass for the Tigers in their 36-10 win over Viera.

RB OJ Ross, Cocoa – Rushed for 151 yards on 14 carries and had four receptions for 47 yards rushing and scored two total touchdowns – one rushing and one receiving – in the Tigers’ 36-10 win over Viera.

RB Zemare Harvin, Fort Myers – Had 26 carries and 189 yards rushing and scoring once in the Green Wave’s 31-21 win over Lehigh.

DB Justin Herring, Interlachen – Had 14.5 total tackles and recovered a fumble in Interlachen’s 12-7 loss to Branford.

RB Ladmian Starks, Hudson – Had 129 yards rushing and three touchdowns for the Cobras in their 29-28 win over Dunedin.

DE Austin Duchene, Jensen Beach – Had seven tackles and four sacks, plus one fumble recovery in the Falcons’ close 28-25 loss to John Carroll.

RB Andrew Burnette, Jensen Beach – Had 193 yards rushing on 24 carries and three touchdowns in the Tigers’ 69-6 win over Gibbs.

DB Tyler Corish, Jesuit – Had two interceptions that were returned for touchdowns in the

QB Jack Smitherman, Lakewood – Went 5-of-5 passing for 190 yards passing and four touchdowns in the Spartans’ 56-0 win over St. Petersburg

LB Jake Chaney, Lehigh – Collected 24 total tackles for the Lightning in their 31-21 loss at Fort Myers.

WR Tarvarish Dawson, Lehigh – Had six catches for 144 yards receiving for two touchdowns for the Lightning in their 31-21 loss to Fort Myers.

DT Warren Etienne, Martin County – Had eight tackles, two forced fumbles and recovered a fumble for the Tigers in their 27-0 win over Okeechobee.

RB Dedric Hall, Nature Coast – Had 12 carries for 115 yards rushing and two touchdowns as well as two catches for 40 yards receiving and collecting an interception on defense for a pick-six in the Sharks’ 42-0 victory over Nature Coast.

LB Preston Murphy, Niceville – Had two fumble recoveries along with five tackles and one tackle for loss in the Eagles’ 35-0 win over Pensacola Catholic

RB/DB Andrew Pickens, Oak Hall – Had 12 carries for 103 yards rushing and two touchdowns plus had one passing touchdown and a two-point conversion as well as intercepted two passes in the Eagles’ 42-8 win over Shorecrest Prep.

RB Jaden Booker, Palmetto Ridge – Had 23 carries for 216 yards rushing and four touchdowns in the Bears’ 58-13 win over Barron Collier.

WR Keymari Odum, Ridge Community – Had 330 total yards of offense and scored twice on the ground in the Bolts’ 45-42 win over Riverview (Riverview).

ATH Eddie Whipple, Ridgeview – Had 212 all-purpose yards and scored four touchdowns for the Panthers in their 38-24 win over Menendez.

WR Jack Rilling, St. Cloud – Collected eight receptions for 155 yards and two touchdowns for the Bulldogs in their 39-7 win over Winter Springs.

RB Jimmy Horn, Seminole (Sanford) – Rushed for 142 yards on 12 carries and two touchdowns for the Fighting Seminoles in their 28-24 win over Spruce Creek.

RB Logan Blevins, Springstead – Had 24 carries for 114 yards rushing and two touchdowns in the Eagles’ 40-0 win over Citrus.

ATH Cedric Hawkins, Trinity Christian (Deltona) – Had 191 yards of offense and scored four total touchdowns – two rushing, two receiving – plus had an interception on defense in the Eagles’ 34-12 win over St. Francis Catholic.

RB Elijah Hopkins, West Port – Rushed for 156 yards on 22 carries and scored a touchdown in the Wolf Pack’s 19-13 overtime win against Forest.

ATH Tobias Lewis, Westminster Academy – Had five catches for 136 yards and three touchdowns in the Lions’ 48-12 win over Berean Christian.