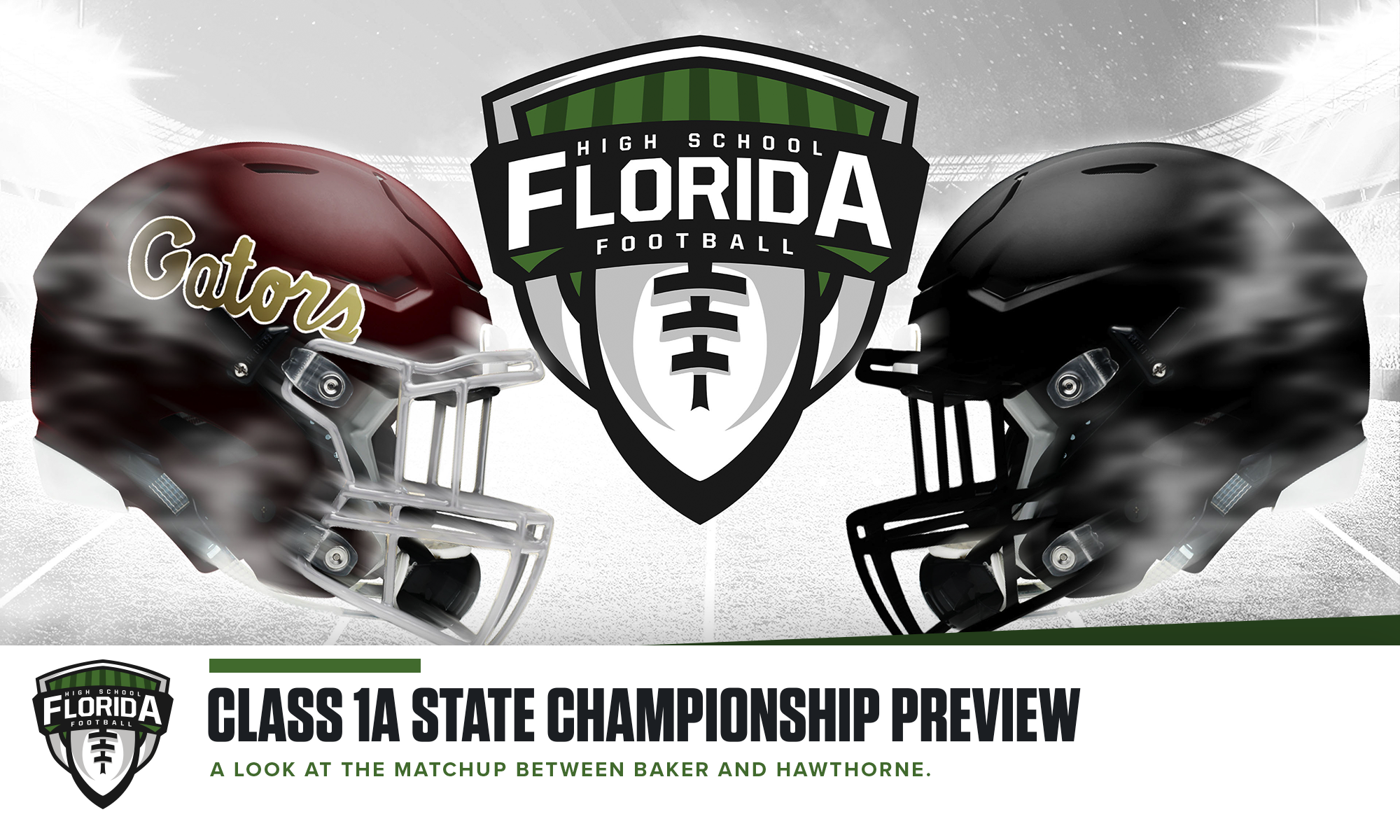 NOTES: This state championship game appearance for Baker will mark their ninth state championship game appearance and is looking for the school’s first official state championship since 1993. … This is also Baker’s third state championship game appearance in the last five years. … For Hawthorne, they are making their first-ever appearance in a state championship game after falling short in the state semifinals in two previous tries in 2009 and in 2018. … Both head coach Matt Brunson of Baker and head coach Cornelius Ingram of Hawthorne are alumni of their respective teams, the only state championship game in the state this year that will feature alumni for both teams as head coaches. … Offensively speaking for the Gators, the team revolves around a one-two punch on the ground with senior RB Joe Brunson, the son of head coach Matt Brunson, leading the way with 2,460 yards rushing on a massive 320 carries and an impressive 27 touchdowns, while the second punch comes from sophomore RB Kayleb Wagner who has 118 carries for 1,251 yards rushing and 16 touchdowns. … And don’t expect much passing as senior QB Brody Sharpe has only thrown the ball for 395 yards passing with four touchdowns against two interceptions. Sharpe is also a key defensive back and leads the team with four interceptions and has a whopping 17 pass breakups to go along with 27 tackles and two tackles for loss… Defensively for the Gators, several key guys lead the way starting with LB Seth Baksa who leads the team with 91 tackles (46 solo) and six tackles for loss and has also collected four sacks as well collecting three interceptions, a fumble recovery, and forcing two fumbles. … Also keep an eye on LB Ethan Edge who has 74 tackles (43 solo), three sacks, and has recovered two fumbles while forcing three fumbles. … The sack leader for Baker is LB Brandon Moss who has collected nine sacks along with his 60 tackles (47 solo), 19 tackles for loss along with one interception, and one fumble recovery. DL Jared Raybon is second in sacks with eight total sacks to go along with 87 tackles, which is the second-most on the team, and 21 tackles for loss which is the most on the team. … For the Hornets, expect a more balanced offensive approach starting with QB Chaz Mackey leading the way. Mackey is 87-of-162 passing for 1,107 yards and has thrown 14 touchdowns against six interceptions. … Some of Mackey’s favorite targets through the air include junior WR Anthony Morgan who leads the team in receiving with 27 catches for 361 receiving yards and three touchdowns while senior WR Johnquavis Jones leads 24 catches for 308 yards receiving and four touchdowns. … With the ground game, expect a bulk of the load to go to senior RB Dre Lawrence who has 182 carries for 929 yards rushing and 13 touchdowns. However, do expect sophomore RB Brandon James and Jones to pick up carries as well on the ground. … Defensively, keep an eye on DL Jailen Ruth who has a whopping 122 total tackles (86 solo) for the Hornets as well as a massive 27 tackles for loss. Ruth also has racked up a team-leading 13 sacks this season plus recovering three fumbles while forcing two fumbles. The next leading tackler is DB Rolaundus Watson who has 97 total tackles (61 solo) with 10 tackles for loss and three sacks. Watson also has recovered two fumbles as well. … Regarding interceptions, the team has only intercepted six passes all season long and has recovered 11 fumbles. … Mackey, who lost his father over the summer, has dedicated this season in honor of him and has overcome tremendous adversity in leadership the team says.