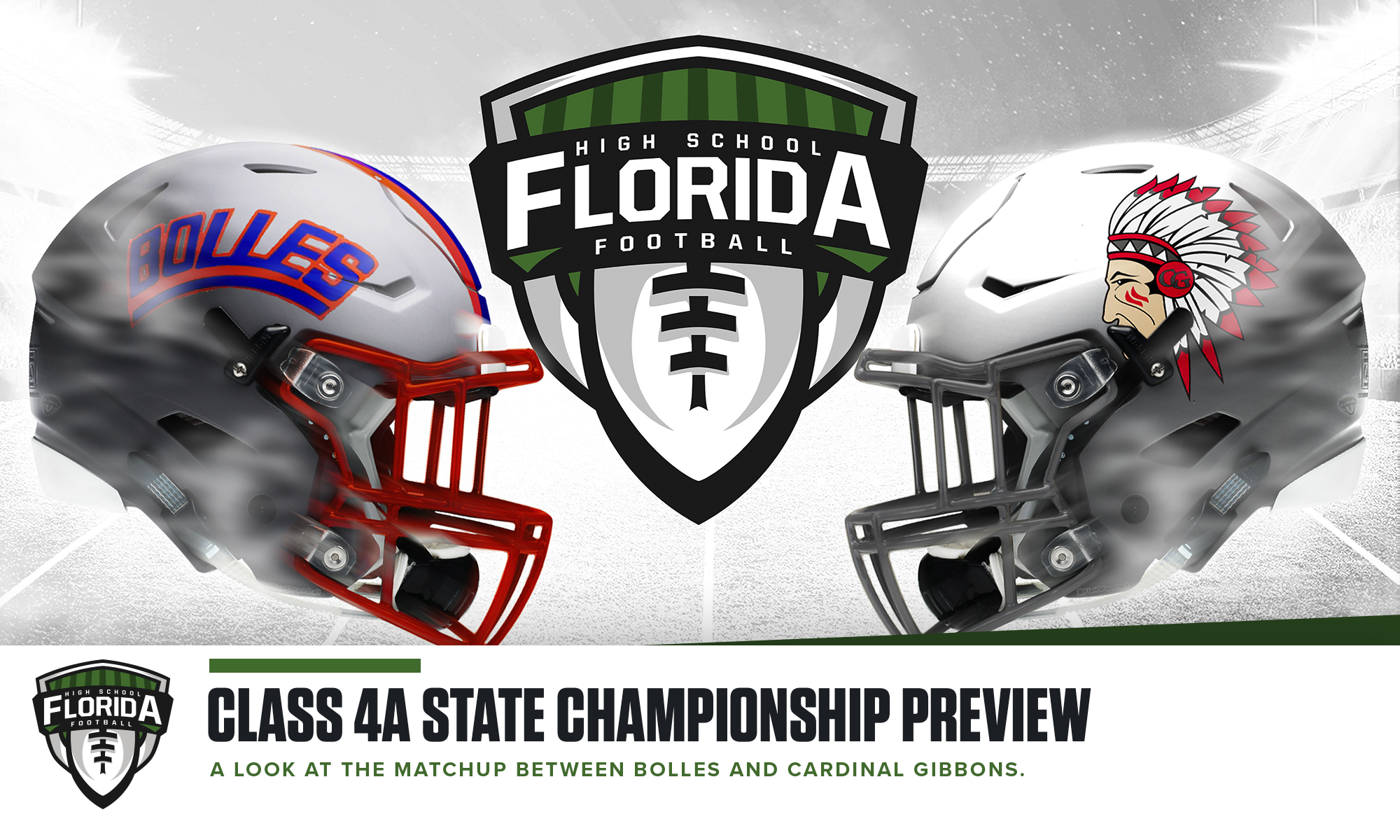 NOTES: This is the first-ever known meeting between these two well-known football programs in the Sunshine State. … This will be Bolles’ second straight appearance in the Class 4A State Championship game and their 19th appearance in a state championship game. … For Cardinal Gibbons, this is their second appearance in a state championship game in three years which they won the Class 5A State Championship in 2018 with a win over North Marion. This will also mark Cardinal Gibbons’ third overall appearance in a state championship game. … Bolles is currently tied with St. Thomas Aquinas for the most state championships won by any FHSAA member school at 11. … Cardinal Gibbons defeated the previous national No. 1 team, St. Thomas Aquinas this season, the first win they have taken over the national powerhouse since 1996. … Looking at the Bulldogs on offense, they are led by junior RB Kade Frew, who has 202 carries for 1,368 yards rushing and 15 touchdowns in 11 games played this season. … The leading passer for Bolles is senior QB Gunner Boree who is 79-of-145 passing for 1,405 yards and has thrown 17 touchdowns against just five interceptions thrown. … Boree’s favorite target is senior WR Davis Ellis, who has 40 receptions for 971 yards receiving and 10 touchdowns. Ellis holds multiple offers from Division I FCS programs. The next leading receiver for Bolles is junior WR Keaton Thomas who has 22 receptions for 268 receiving yards and three touchdowns. … Defensively, the Bulldogs have several leading tacklers starting with senior LB Mack Marrone, who leads the team with 132 tackles (91 solo) and has the second most tackle for loss on the season with 17 TFL. Marrone also has three sacks, two interceptions, forced three fumbles, and has blocked two punts in all 12 games played. Another player that stands out defensively is senior LB Caden Fordham, a three-star NC State commit who has 112 tackles (77 solo) total which is the second-most on the team, but leads with the most tackles for loss with 24 tackles for loss. Fordham also has four sacks, one interception, one force fumble, and two blocked punts. … The leader of interceptions for the Bulldogs is senior CB Avery Epstein, who has collected six interceptions along with 32 tackles (24 solo), three tackles for loss, and has recovered a fumble. … Meanwhile, the sack leader for Bolles is LB Jack Pyburn, who has six sacks total to go along with 109 tackles, which are third-most on the team, and 15 tackles for loss. … For the Chiefs, expect to see things balanced on offense and that will start with senior QB Brody Palhegyi who is 78-of-125 passing for 884 yards and has thrown 13 touchdowns against four interceptions in seven games played this season. … Favorite targets include junior four-star WR Troy Stellato, a Clemson commit, who has 26 receptions for 325 yards receiving, which is the most for the Chiefs, and five touchdowns. Another top target is junior WR Davon Kiser who has 20 catches for 214 yards receiving and three touchdowns in eight games played. … And yes there is a ground game as well for the Chiefs which is lead by sophomore RB Kamari Moulton who has 76 carries for 454 yards rushing and three touchdowns. Moulton is followed up by another sophomore in RB Torrence Miller who has 49 carries for 324 yards rushing and four touchdowns. … Defensively for the Chiefs, there are two leading tacklers who each have racked over 60 total tackles in eight games played. The leader of tackles is junior LB Trayvon Brown who leads with 65 tackles (27 solo) and has seven tackles for loss. The second-leading tackler is senior LB Jack O’Keefe who has 60 tackles (24 solo) and 10 tackle for loss along with four sacks. O’Keefe’s four sacks are the second most defensively for the Chiefs. … The sack leader for the Chiefs is junior DE/SS Mason Thomas who has six sacks to go along with 40 total tackles (15 solo) and 15 tackles for loss. … Junior DB Isaiah Farris leads the team with three interceptions and has 13 tackles (7 solo) on the season. … Bolles has dedicated this season to a longtime patron, Mr. Chester Skinner as well as the late and Florida’s all-time winningest football coach, Corky Rogers who lost his battle with cancer earlier this year. … Head Coach Matt Dub+Buc of Cardinal Gibbons is an alum of the school and played in the team’s first-ever state championship game appearance in 1990.