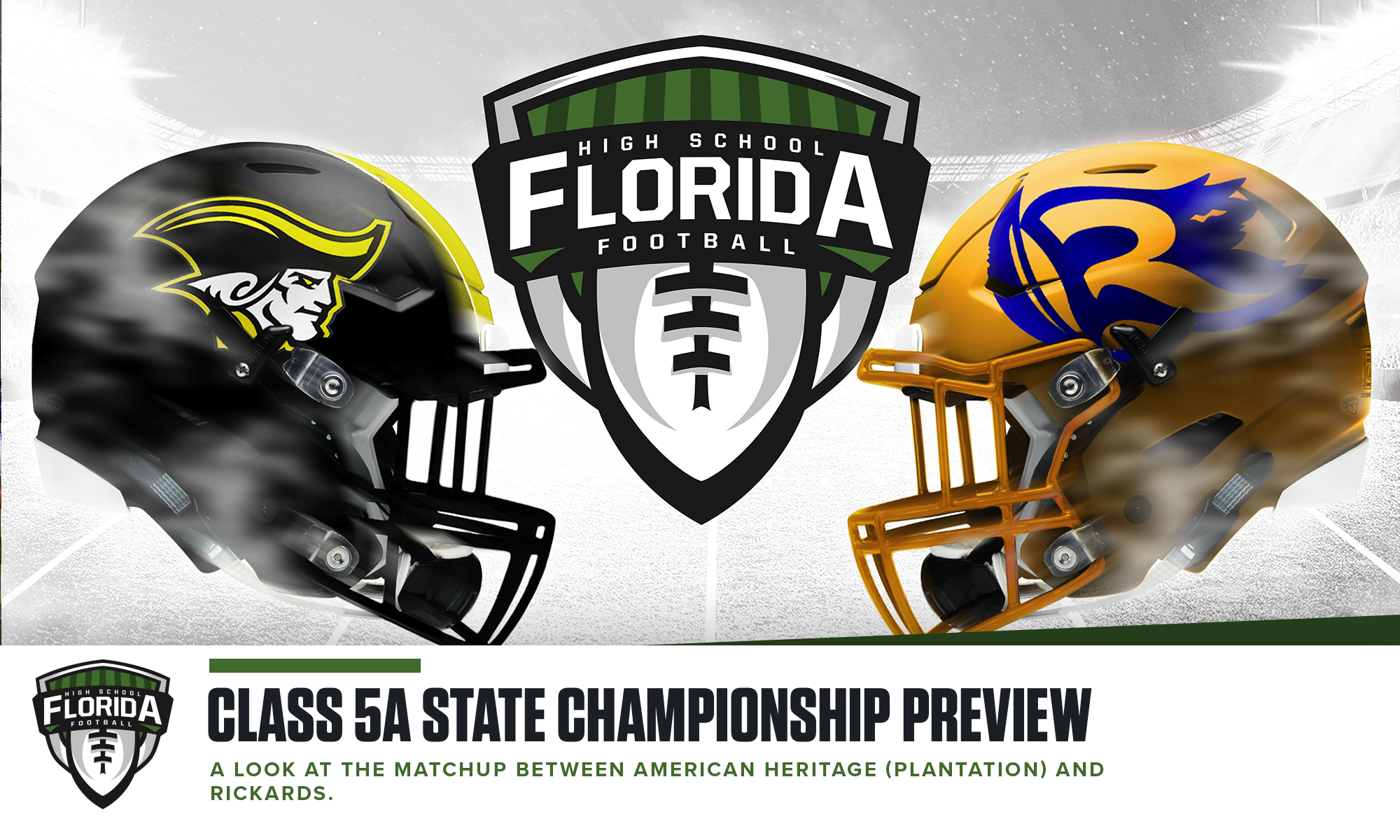 NOTES: This is American Heritage’s sixth appearance in a state championship game and their first appearance in the Class 5A State Championship game since 2017. … American Heritage is looking to add their fifth state championship in school history. … For Rickards, this is their first-ever appearance in a state championship game in school history. Also as such, this is the deepest playoff run for Rickards in school history, besting their best run that came in 2016 where they reached the Regional Finals that year under head coach Quintin Lewis, who is an alum of Rickards, who played under former head coach Ricky Bell who is retiring at the end of this month as Leon County’s District Athletic Director. … Looking at the offense for American Heritage, expect things to happen mostly on the ground for the Patriots. That starts with sophomore RB Mark Fletcher who has 1,278 yards rushing on 183 carries and scoring 16 touchdowns in 12 games played. … If things getting to be a concern on the ground, the Patriots will look under center with sophomore QB Blake Murphy who is 47-of-57 passing for 592 yards and has six touchdowns compared to four interceptions thrown. … Defensively for the Patriots, they have been very dominated, racking up 53 total sacks. The sack leaders include four-star junior DE Marvin Jones Jr., who holds multiple offers including those from Alabama, Florida State, Miami (FL), and Oregon just to name a few. Jones is tied for the lead at 11 sacks along with sophomore LB David Vadala who has 11 sacks as well. Jones 47 tackles (17 solo) and 12 tackles for loss along with one fumble recovery and one forced fumble. For Vadala, he has 70 total tackles (28 solo) and 23 tackles for loss. Vadala’s tackle and tackles for loss totals lead the team. … SAF James Williams, who played at Western before transferring to American Heritage during the offseason, has had a monster senior year as well. The five-star Miami (FL) commit has racked up 64 total tackles (30 solo) and six tackles for loss along with two sacks, two interceptions, four fumble recoveries, two forced fumbles, and a blocked punt. … The interception leader on defense for the Patriots is sophomore SAF Daemon Fagan who has four interceptions. … For the Raiders, things on offense will be a balanced approach with a solid rushing and passing attack. Looking at the passing attack first, QB Michael Townsend will be the main man under center who is 100-of-179 passing for 1,273 yards and has thrown 10 touchdowns against six interceptions. Townsend also has 386 yards rushing on 78 carries and five touchdowns. … On the ground keep an eye on RB De’andre Francis who has racked up 1,166 yards on 168 carries and 12 touchdowns. … The leading receiver the Raiders is junior WR Greg Turner Jr. who has 22 catches for 315 yards receiving and three touchdowns. … On defense, the leading tackler is LB Trevon Riles who has racked up an impressive 164 tackles (92 solo) with seven tackles for loss. Riles also has six sacks as well as an interception, two fumble recoveries, and one forced fumble. … The sack leader for the Raiders is LB Alvin Bell Jr. who has collected up eight sacks this season to go along with 58 total tackles (37 solo) and 11 tackles for loss. … Senior DB Kameron Bell leads the team interceptions with six and has 22 tackles to go along with one fumble recovery and two forced fumbles. Also keep an eye on CB Malik Franklin, a three-star South Alabama commit who has 10 tackles and an interception this season.