Home Latest Headlines OPINION: Time for the FHSAA to cut a classification in football 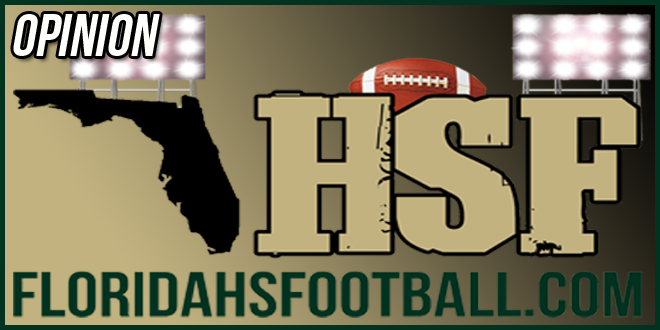 With the reclassification process coming up once again later this year, that will be effective with the start of the 2015-16 school year, the FHSAA will need to listen to everyone.

When we mean everyone, we mean everyone who is now involved with high school football in the state. That includes athletic directors, coaches, players, fans and the media.

What is at stake is way more than previous reclassification cycles over the last two decades.

With classification cycles recommended to go on a quadrennial basis or every four years, the FHSAA is going to have to make sure we get the district alignments correct and get the number of classifications to the proper number. If the FHSAA doesn’t get it mostly right, there  will be another mass exodus of teams heading for the independent route and leaving a lot of questions on the table and no recourse.

Right now our current system for football classifications is broke and needs fixing.

Over the last five years the number of independent programs have risen to a staggering number that is over 80 teams. They can create an entire classification by themselves with that amount.

And the number of teams staying in that independent column is likely to remain unchanged for the foreseeable future.

Just a couple of coaches I have talked to from various independent conferences, have been very loud and clear why you see these programs going independent.

They want a level playing field.

The playing field isn’t level at all and it shows right through the current classification alignments that we have. With the mass exodus of more teams either going independent or dropping football altogether, things have thinned out even more.

In all of this though, I believe I have found a fix to the system.

First, the FHSAA need to cut one classification in football to seven classes if we are going to restore competitive balance. We can still keep up geographically relative districts with this.

Second, the percentage rules for how many teams go where needs changing.

Instead of risking teams of injury between Week 10 and Week 11 games and having to go out and play those pesky quarters to break a district tie, there is a better way.

Once all of the head-to-head options have been utilized, the next option instead of playing a district tiebreaker shootout to decide the playoff spots at stake, we can use a capped point system. This is an easier option and it would be a fair way to decide the playoff spots, especially in a three-way tie, which is the most common tie in the state.

I will present a series here on FloridaHSFootball.com this coming week that shows these ideas. Also I will show how possible districts would look using the most recent FHSAA student population numbers along with maps, plus you will have to chance to voice your opinions.

I hope you join me in what I hope is the wake-up call needed to keep high school football competitive in the Sunshine State.