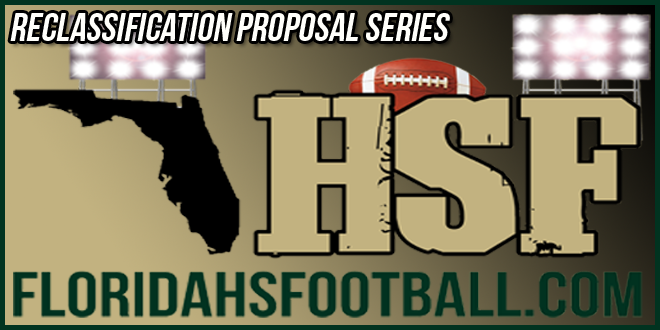 EDITOR’S NOTE: This is the first part in a five-part series on how the FHSAA can cut the number of football classifications to seven and make things competitive again for the state.

Over the weekend I presented my opinion that the FHSAA needs to cut the number of classifications to seven to keep up competitive balance for teams trying to compete for a state championship.

Remember, this is a suggestion for the FHSAA to look at, if you like what you see from this, I would suggest voicing your opinion to them and more importantly to the Executive Board of Directors that makes the final decision in the process.

Now this is where I get to explain how it can be accomplished.

First thing needing to be accomplished, is that the FHSAA Executive Board of Directors will need to have bylaws rewritten showing that football would be set at seven classifications, instead of eight.

Currently, the rules for evenly dividing up teams as much as possible under eight classifications follows as this:

This is why you see the number teams now spread so thin among the lowest classifications in the current set up. It is these percentage rules that are causing issues.

What I have proposed for evenly dividing up the teams with seven classifications is this change to the percentage rules.

There are 485 teams I have listed as teams that will be in or projected to be in district competition for the 2015-16 school year. Teams that recently dropped to independent after the season, usually have to wait a two-year period before reentering district play, so they are not included in the figure county. Also teams that are very likely to stay independent are not counted as well.

The enrollment numbers used for this comes from the 2013 FHSAA Student Population Report.

Here is how things would look like if things stay at eight classes for the next reclassification cycle starting in 2015-16, using the current percentage rules.

Here you would be looking at districts having at average of just five teams from Classes 5A to 8A while, averaging 5.25 teams a district from Classes 1A to 4A.

Nothing changes at all pretty much

In the seven classification setup using the proposed changes to the percentage rules here is how things would look like:

192 teams are still making the playoffs here and with the possible 485 teams in district play for 2015-16. that would be just nearly 40 percent of the 485 that will make the playoffs.

By simply reducing one classification, we can increase the average district size by one team to six. While Class 3A, 2A and 1A would still average roughly six teams per district as well.

The rural Class 1A does not change here in situation either. With Class 1A being highly successful for the FHSAA, there is no reason at all to make a change here.

In the next part of this series tomorrow, I will show you what Classes 8A & 7A would look like under the seven classification model presented in this article.

DISCUSSION: Discuss below using facebook comments, or discuss this on The Varsity Message Board.