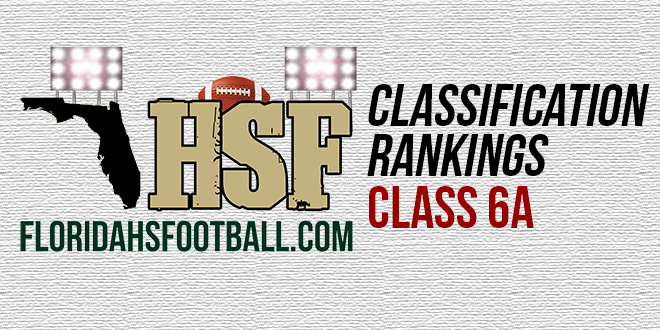 Here are the Class 6A Preseason Rankings from FloridaHSFootball.com

1. Miami Central: The Rockets could join the likes of Suwannee and North Florida Christian as the only schools to ever win four straight state championships this season. The Rockets are a loaded team with either returning players back or as result from transfers. The Rockets finished the 2014 season with a 14-1 record and the Class 6A state championship.

2. Mainland: Mainland was close to knocking off Miami Central last season in the state semifinals, but didn’t finish the job. However, the team Mainland will have could be even better than last year’s team. With a lot of the team returning and the addition of quite a few transfers from other area. Finished the 2014 season with 13-1 record.

3. Armwood: Armwood will be a bit younger this year, but that shouldn’t really mean much as the Hawks are consistently one of the top teams in the state every year. However, the Hawks will find that there is more competition now in Class 6A North, so a run to Orlando is not totally in the books here. Finished the 2014 season as the Class 6A runner-up with an overall record of 14-1.

4. Niceville: After a couple of years in Class 7A, the Niceville Eagles are back down in Class 6A. The Eagles will be younger than the last two teams that reached at least the state semifinals in Class 7A, but they are a team that knows how to grow up quickly. The Eagles finished 2014 with a 11-3 record.

5. Naples: Naples might have one of the best teams in the last few years this season and they will certainly give teams fits on both sides of the ball. A team named Miami Central or Mainland could be waiting for the Golden Eagles come time for the state semifinals – that is if they make it that far. The Golden Eagles finished the 2014 season a 10-2 record.

6. Lake Gibson: Although the Braves have not gotten deep in the playoffs the last few years, things are looking to change this year. In what could be one of the best Lake Gibson teams in years, they are an early favorite to win their district that also includes Lake Wales. The Braves record last season was 9-2.

7. Heritage: With several 1,000 yard rushers back from a team that went 8-4 last season and reached the regional finals, Heritage could be a dark horse to either upset Mainland, Miami Central or possibly both in Region IV this season.

8. Escambia: The Gators made a quick exit out of the playoffs last season after winning their district for the first time in years, but with stability now place things will be different this year. Gators are an early favorite in their district, but Tate and Pine Forest will be chasing them. Finished the 2014 season with a 9-2 record.

9. Navarre: The Raiders are another team that could be in contention to make a deep playoff run this year. If it has not been noticed yet, the Panhandle is very much loaded with top quality 6A teams and Navarre is another one. The leadership under head coach Jay Walls has been tremendous and it should continue this year. Navarre finished the 2014 season with a 9-3 record.