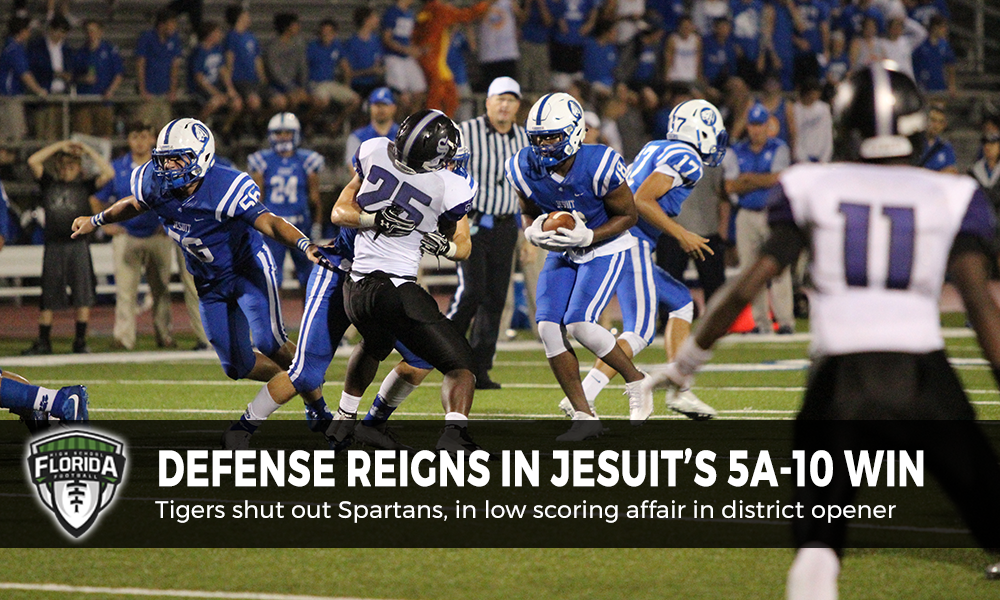 It's week six, baby! Time for @SpotoHsFootball and @JesuitTampaFL on the final Friday in September! pic.twitter.com/C5pqwoCJyT

Jesuit (2-2, 1-0) took down the visiting Spoto (Riverview) Spartans (3-2, 0-2), who played its second game this week after losing to Robinson (Tampa) on Monday. The Spartans, who were a 27-point underdog according to Joe Pinkos, played a strong defensive game as well to keep the Tigers from running away with the game.

On its opening drive, Jesuit drove inside the Spoto five-yard line when Demetrius Thurman intercepted an under-thrown pass from Enzo Tedesco, who was looking for Jonathan Odom in the end zone.

Spoto couldn’t do anything with the gift, as they punted after a three-and-out. That would become a disastrous trend for the Spartan offense.

Tedesco opened up the Tiger offense with a 25-yard pass to Nick Spurlin, setting up a 30-yard field goal for Cade Freeman. He drilled it, giving the Tigers a 3-0 lead as time expired in the first quarter.

Both sides traded drives throughout the second. Both defenses held strong. Marvion Harris intercepted Tedesco to keep the Tigers out of the end zone for the second time of the night.

“Every week we’ve got to hold the offense up if they’re struggling, just like they’ll hold the defense up if we’re struggling,” said Jesuit LB/DE Anthony Nelson. “It’s a one-to-one thing that we have to help each other out.”

The second half opened up more opportunities for the Tigers to advance their offense. Right out of the half, Jesuit leaned on Jaden Pask for 39 yards on four quick rushes before Larry Hodges powered his way through the line for a 33-yard touchdown run.

Hodges, recruited by many Division One schools as a tight end, showcased his running ability as the Tigers are continuing to figure out how to replace Malik Davis at running back. With Matthew Pittman out with an injury, Jesuit gave six different players touches at running back on Friday.

Hodges capped off a methodical 19-play drive in the fourth quarter with a one-yard touchdown to extend the lead to 15, giving the Tigers all they would need. Hodges rushed for 66 yards on 10 carries, which led Jesuit on Friday. Spurlin added 54 yards, while Pask, Vinny Losauro, Ricky Parks, and Ethan Dieck got chances to run the football.

“We’re just trying to pound the ball and open up the play-action,” Hodges said. “Our line is doing a good job blocking, we just really have to try and hit the holes better as a team.”

Brendenn Flynn relieved Tedesco in the second half at quarterback, focusing mainly on continuing to pound the run game.

For Spoto, Singleton made some nice throws to his receivers, and Harris was consistently in on plays on the defensive side of the ball. The Spartan defense as a whole looked good throughout the night, but without any sustained offense, Spoto had a difficult time getting any momentum.

Jesuit will play Osceola (Kissimmee) for its first road game of the season while Spoto will face off against Chamberlain (Tampa), who will play two games next week (the Chiefs battle Armwood on Monday night).