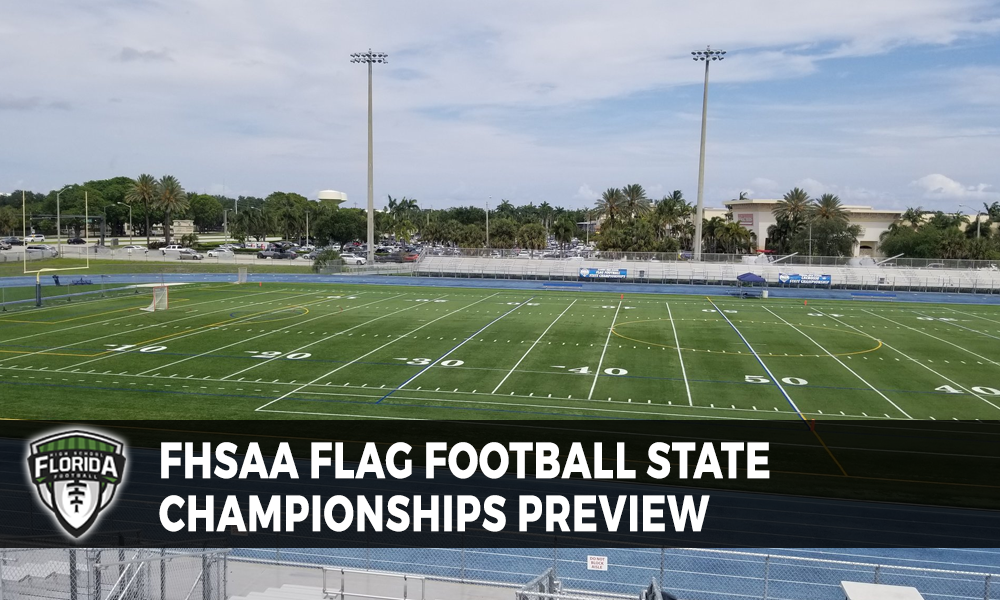 BOCA RATON, Fla. – It is that time of year once again to where we get to put a crown on top of the entire season by crowning two state champions with the FHSAA Girls Flag Football State Championships.

This year in Class 2A, there will be a brand-new champion after defending state champion, Plant, was shut out of the regional playoffs, falling to Alonso in the District 2A-7 Championship game two weeks ago.

In Class 1A, defending champion Robinson has a chance to go for the three-peat and for their fourth state championship in five years and has been battle tested throughout the season.

Now let’s look at each of the eight state semifinals teams for this weekend. These previews are brought to you by ScoreStream. Help us score and share a photo on ScoreStream this weekend using the ScoreStream app on your iOS or Android device. Click the link here to download the app.

NOTE: Remember with all the state semifinals and state championship games being played in a combined one day this year this will be the only preview for this weekend. Rankings are based on the Top 25 released before the regional playoffs.

A LOOK AT THE TEAMS

The Knights have played one of the toughest schedules in the state this season and that is very evident in the two losses they took on as they lost to No. 16 Lincoln, 7-6 at the Capital City Classic in Tallahassee last month and as well as losing their regular season finale to No. 1 Alonso, 18-12 in overtime. They have easily handled opponents Seminole Osceola and Brandon posting back-to-back shutouts in the regional playoffs.

A return to the state semifinals is no surprise for the Red Raiders, having reached this level and the state championship game last season, only in their second season as a full program being lead by 3rd-year head coach, Vince Hall.

Looking at the schedule this season for the Red Raiders has mixed, easily beating up on district opponents, some with scores like Miami Central, 75-0, while just slipping by more quality opponents outside of the district like Dwyer, 12-0, and Miami Jackson 19-0 before besting the Generals again in the playoffs by a score of 7-0. The only win against a current Top 25 came against No. 15 Monsignor Pace in the regional finals, 13-0 to get to Boca Raton.

For the very first, time Glades Central will be represented in the state semifinals in flag football, a journey that has been a hard fought one for head coach Samuel Curry who is in his 9th season as the head coach.

The Raiders, which played a very tough schedule this season included a split in games with No. 21 Jensen Beach, dropping that game 14-7 for their only loss on the season before shutting down the Falcons in the District 1A-11 Championship. One of the biggest wins though came from outside of the district taking down No. 4 Seminole Ridge defeating the Hawks 21-20 for the first win over the powerhouse program from Loxahatchee.

Clay, led by second-year head coach Jared Moses, are in the state semifinals for the first time in program history. The Blue Devils are now following among the footsteps of the boy’s tackle football team that has had a tradition of deep playoff runs and having played in several state semifinal games in recent years as well as the 2013 Class 5A state championship game, something very other few flag football programs in the state have been able to do so far.

The schedule this season for Clay, however, has not been the most impressive with eight of nine games coming against district opponents in which they easily handled business, only giving up six total points and then giving up only six more points in the district championship against Orange Park. However, not a single win during that stretch from the regular season through districts came against a Top 25 opponent. However, Clay has picked up two wins against Top 25 teams in the playoffs shutting out No. 24 Terry Parker in the regional semifinals and upsetting No. 2 Choctawhatchee 14-13, to get to Boca Raton.

It has been a work in progress for Alonso and 11th-year head coach Matt Hernandez to get back to the Flag Football State Championships having last made a trip to state in 2014 where the lost in the state quarterfinals under the single classification format.

To say the schedule was easy when looking at the scores, would be the wrong look to put on Alonso. Two of the 13 shutouts that Alonso has posted this season came against last year’s Class 2A state champion, No. 11 Plant while defeating some other quality teams like No. 16 Lincoln, Brandon, Wharton, and Steinbrenner. If you are thinking the defense has been a key reason for the Ravens to get here this year, you would be right, but the offense has also done its part as well.

The second team that has been in a state championship game for at least the past five seasons, the Seminole Ridge Hawks are familiar of playing on this stage like Robinson, being lead by 3rd year head coach Scott O’Hara, who has been a part of the program for years before becoming the head coach in 2016.

When looking at this year’s version of the Hawks, you could say it is not the best squad they have produced, and you would be correct. Several district games came down to the wire with 12-7 wins over Wellington and Dwyer and a pair of 6-0 wins over Jupiter in the regular season and in the district championship game. Their only loss came to No. 7 Glades Central, 21-20 right at the end of the regular season. However, anyone will tell you that all of this is just experience for the Hawks and that would be right as well.

For 3rd year head coach Al DiLiello, he has seen his Cooper City Flag Football team be able to make a run once again to the state semifinals, something they accomplished for the first time last season before falling to Seminole Ridge.

Looking at the overall body of work through the schedule, the Cowboys were one of a very few South Florida teams to schedule at least one opponent outside of the comfort zone of playing someone near home. That one game was against now No. 17 Godby which they lost 13-0. However, Cooper City does have wins against No. 18 Western as well as No. 12 Dr. Krop, the win against Dr. Krop coming in the regional playoffs.

The most surprising team of the season is making their first trip to the state semifinals after winning their first flag football district championship just two weeks ago under 3rd-year head coach Tommie Butts, whose first year in 2016 saw the team go winless.

Looking at the schedule, Wekiva held 10 of 15 opponents scoreless, a pretty amazing stat for a program that has not had this amount of success before. One of the biggest wins came twice over the more dominant Apopka flag football program pulling off a big win in the regular season 14-6 before shutting them out 24-0 in the district semifinals in District 2A-2. In the regional playoffs, Wekiva has defeated Sandalwood and No. 8, Dr. Phillips, to get to Boca Raton.

WHO DO WE SEE WINNING?

OUTLOOK: Robinson is the more experienced team here. I would expect Clay to put up a fight, but this is a powerhouse they are facing in Robinson. If the Blue Devils want to continue this success into the future they are going to have to get some teams on the schedule that could compare to a program like Robinson. This game will be a great first lesson, for the Blue Devils, but this one goes to the Knights.

OUTLOOK: Expect this game to be an instant track meet, however, I feel the team that has learned its lesson the best on building program during the season has been Glades Central. Not only they have played a much tougher schedule than Edison, they have some quality wins that the Red Raiders simply cannot say they have. The Raiders will win, and it will be the one from the Muck-area of Palm Beach County.

OUTLOOK: This should be a great game with both teams posting double-digit shutouts this season, but Alonso is the more seasoned team in this matchup. I expect Wekiva to be able to contend, but if Alonso gets going early and scores often, this could be a runaway game. So, yes things could easily go either way here despite both teams coming in with an unblemished record.

OUTLOOK: Both teams are not as strong as last year’s teams who had met in the state semifinals in Gainesville. However, if there is a team to choose among the two to advance to the championship game, I am going with experience here and that is for Seminole Ridge. However, if Cooper City can figure out the Hawks, that could be huge to get to their first championship game.