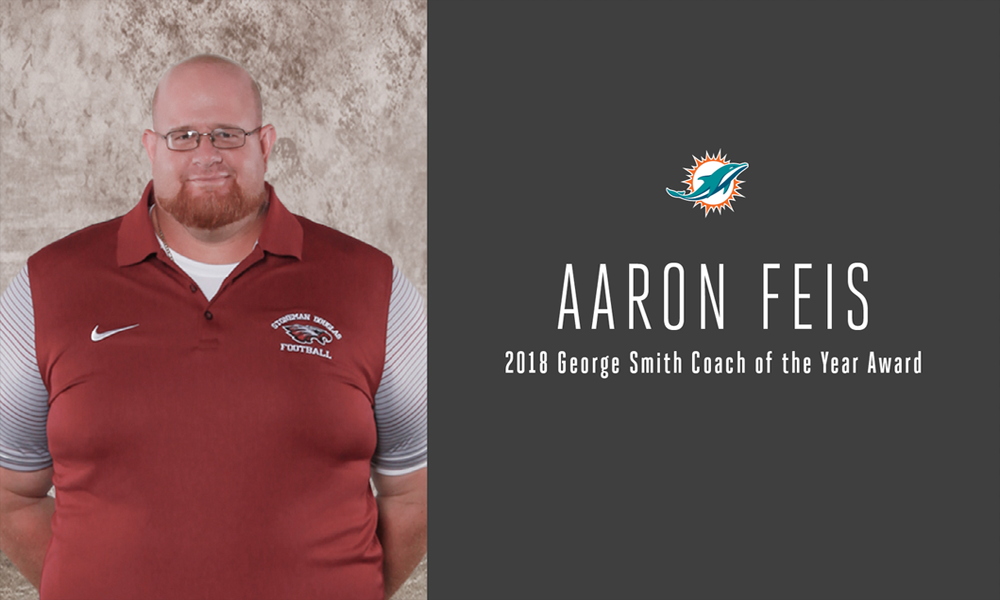 The following is a press release from the Miami Dolphins.

MIAMI, Fla. – The Miami Dolphins announced Marjory Stoneman Douglas High School Assistant Coach Aaron Feis as their George F. Smith High School Coach of the Year. Feis tragically lost his life protecting students during a mass shooting on February 14th. The Dolphins posthumously honored Aaron along with his wife, Melissa, and daughter, Arielle, on the field during their home opener against the Tennessee Titans. The Stoneman Douglas football team also were the Dolphins team of the week and had the opportunity to stand on the sideline during the national anthem.

“It’s an honor for all of us, really, for Coach Feis to get the Coach of the Year Award. If you knew him, you would appreciate that he got that award, because he really was a great man, mentor, friend and dad,” Marjory Stoneman Douglas High School Head Football Coach Willis May said. “What a wonderful day for our kids and our program and we had a blast. We loved it and we can’t thank the Miami Dolphins enough for everything they’ve done for us since February 14th. We want to say thank you and how much we appreciate it and what they’ve done for our kids, it’s amazing.”

Feis is now a nominee for the Don Shula NFL High School Coach of the Year Award, which honors high school football coaches that demonstrate the integrity, achievement, and leadership exemplified by the winningest coach in NFL history, Don Shula. The winner will be announced at the 2019 Pro Bowl in Orlando.