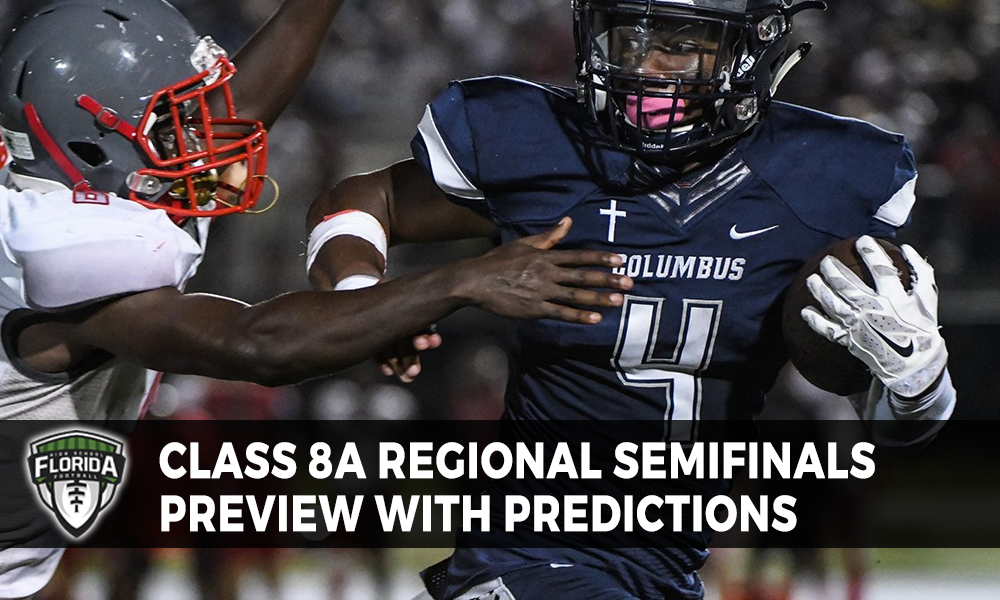 The Class 8A regional semifinals are set up for what could be an exciting stretch finish on the Drive to December. With Class 8A providing some upsets last week, there is a chance a few more might be on the horizon this week.

This is a rematch of a Week 10 District 8A-10 showdown between the Buccaneers and Spartans … Southridge won the last meeting in a squeaker, 15-13 to claim the district championship … South Dade defeated No. 4 seed Hialeah, 49-14 last week … Southridge defeated No. 7 seed No. 7 seed North Miami, 35-21 last week … For the visiting Buccaneers keep an eye on wide receiver Najeh Baker to do the damage as he had three touchdown catches last week in leading them past the Thoroughbreds … Demetrius Burns will also be a lethal threat for the Buccaneers having thrown for 11-of-17 for 152 yards and four touchdowns last week … For the host Spartans watch out for dual-threat quarterback Antwan Anderson to do damage as he was responsible for four touchdowns last week (two passing, two rushing) … in their last meeting in the playoffs in 2015, South Dade won the contest in a close 21-14 in a game, according to Florida high school football historian Richard Burton, saw South Dade down Southridge for the second time that season behind the strong performances of Jawon Hamilton and James Wiggins to advance to the Class 8A Regional Finals.

A rematch of a Week 10 District 8A-4 contest between the crosstown rivals … Wekiva won the Week 10 matchup in dominating fashion of a 35-0 shutout … The visiting Blue Darters defeated No. 4 seed Oviedo, 35-28 last week … The host Mustangs defeated No. 8 seed West Orange, 16-0 last week … For Apopka keep an eye on athlete Akeem Brown who scored four touchdowns (two receiving, one punt return, one rushing) against Oviedo last week … For Wekiva keep an eye on the entire defense which has not allowed an offensive score since their Week 6, 30-29 loss to West Orange. Prediction: Wekiva 21, Apopka 0

First playoff meeting between the teams … Mandarin last week dominated district rival and No. 6 seed DeLand, 35-0 … Winter Park easily took down No. 7 seed Flagler Coast, 35 -7 … For the visiting Mustangs keep an eye on quarterback Carson beck who torched the injury-riddled DeLand defense five touchdown passes going 14-of-24 passing for 224 yards … For the host, Wildcats watch out for Marcus Clarke on both sides of the ball as he had a touchdown on both offense and defense … Peter Hayes-Patrick will also be a threat for the Wildcats after rushing for two scores last week. Prediction: Winter Park 31, Mandarin 24

Second playoff meeting between the two programs … Dr. Phillips won the first matchup in 2016, 34-24 in Orlando … The visiting Panthers took down No. 5 seed Centennial last week in overtime, 34-28 … The host Indians easily took down No. 8 seed Kissimmee Gateway last week, 45-7 on a season-high 501 yards of offense … For Dr. Phillips keep an eye on Japerri Powell who rushed for 154 yards on 31 carries, scoring four touchdowns in the process … For Vero Beach … For Vero Beach signal caller Nick Celidonio will be the one to watch as he torched the Gateway defense through the air with 326 yards on 21-of-26 passes to go along with four touchdowns. Prediction: Vero Beach 35, Dr. Phillips 20

A rematch of a Week 8 District 8A-6 contest between Manatee and Riverview … Riverview won the Week 8 contest 24-13 … For the visiting Hurricanes, they took down No. 2 seed Kissimmee Osceola in an upset last week, 28-17 … For the host Rams they took down No. 6 seed Treasure Coast in easy fashion, 41-22 … Keep an eye on quarterback Anthony Squitieri for Manatee who threw for 174 yards and two scores and will be looking to try to pick apart the Rams’ pass defense … Watch out for running back Ali Boyce for Riverview who rushed for 138 yards last week, scoring three times on the ground. Prediction: Riverview 35, Manatee 17

This will be the sixth all-time meeting in the playoffs between the two Broward County programs with Plantation leading that mini-series 3-2 … the visiting Colonels fought tough in a close game with No. 5 seed Piper, winning that game 23-12 … the host Bucks easily took care of business in the second half last week, defeating No. 8 seed Miramar, 32-14 … For Plantation keep an eye on keep on quarterback Gerard Nesbitt to lead the offense as he did last week … For Deerfield Beach, Jaylan Knighton will be the one to watch as he did most of his damage in the second half last week with 140 yards and scoring three times. Prediction: Deerfield Beach 28, Plantation 14

Second playoff meeting between two of South Florida’s fastest-rising programs … Western won last year’s meeting, 14-12 … This game has the potential to be on upset alert again for this week after Western defeated previously undefeated No. 2 seed Delray Beach Atlantic, 21-7, last week … Palm Beach Central easily took care of No. 6 seed Wellington last week, 44-14 … For the visiting Wildcats, they are going to be led by quarterback Jesse Rivera who been the leader of the offense the entire season … As for the host Broncos, keep watch out for quarterback Mike Moreland to do his own damage after rushing for two touchdowns last week. Prediction: Western 24, Palm Beach Central 23

First playoff meeting between the two-longtime Miami schools … Palmetto easily defeated No. 4 Belen Jesuit, 45-7 last week … Columbus battled in another dogfight with No. 8 seed Coral Gables last week winning, 38-21 … For the visiting Panthers, keep an eye out for quarterback Cairiq Rackley has been a sensation all season who went 13-of-19 passing for 236 yards and three touchdowns last week … For the host Explorers keep an eye on the ground of attack of Henry Parrish Jr. who rushed for 266 yards, scoring four touchdowns last week. Prediction: Columbus 34, Miami Palmetto 24

Last Week’s 8A picks record: 12 correct picks, 4 boos out of the stadium