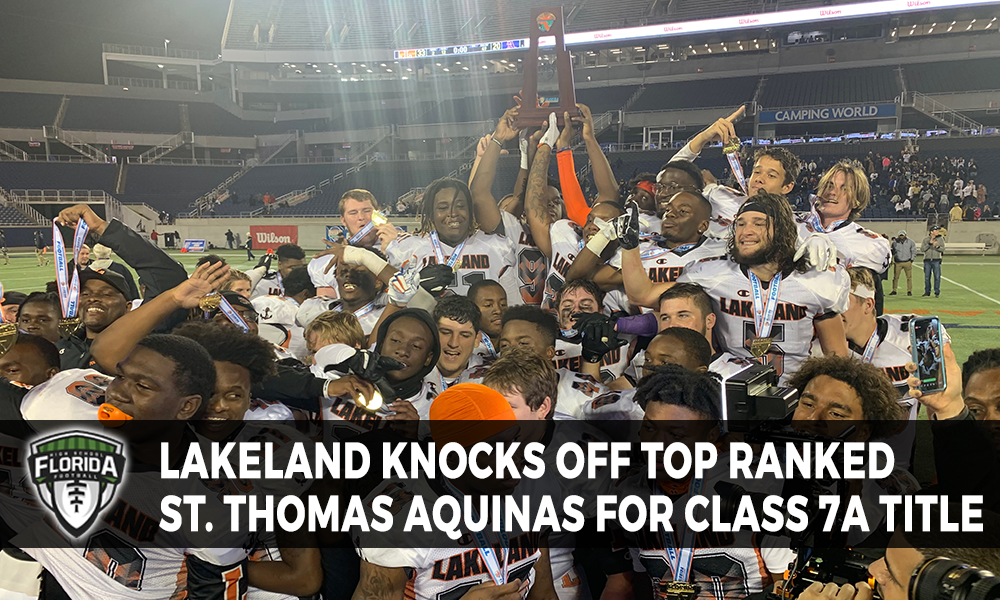 ORLANDO, Fla. – It might have taken 12 years, but the victory couldn’t be sweeter for one of Florida’s most storied football programs – the Lakeland Dreadnaughts (15-0).

And what is even better about the victory? It came against the team that Lakeland won four of their previous six state championships – the St. Thomas Aquinas Raiders (13-2), who they defeated 33-20.

The Raiders which were coming into this ranked No. 1 in Class 7A and ranked Top 25 nationally by multiple national publications didn’t see the complete game that legendary coach Bill Castle was going to call.

Also, never mind the fact that Lakeland was 4-1 in previous championship games against the Raiders.

However, with the second quarter, things started to open up after the Raiders’ Logan Lupo missed a 30-yard field goal and on the next play the Dreadnaughts’ Demarkcus Bowman ripped off an 80-yard touchdown run to give Lakeland a 7-0 lead early in the first quarter.

Bowman had a huge night for the Dreadnaughts rushing 22 times for 211 yards to go along with his touchdown.

While Lakeland was looking sharp, St. Thomas Aquinas kept finding themselves in trouble, especially after Lupo missed another field goal, this time from 35-yards out with 7:22 to go in the first half.

The Dreadnaughts would put together a drive to pretty much close out the first half with a Jace Hohenthaner 38-yard field goal with 15 seconds left to take a 10-0 lead.

In the opening minutes of the second half things got interesting when St. Thomas Aquinas fumbled the ball away quickly on their first possession with Lakeland fumbling the ball right back to the Raiders.

As such with all the fumbling, St. Thomas Aquinas eventually capitalized with Curt Casteel 15-yard quarterback keeper to cut the Dreadnaughts’ lead to 10-7 with 10:30 left

However, cutting the lead would be very short-lived when Fenley Graham returned the ensuing kickoff for 99-yards allowing Lakeland to increase the lead again, this time 17-7, taking just 17 seconds off the clock.

St. Thomas Aquinas, however, fought back once again using several Casteel passes including a 44-yard reception to Marcus Rosemy for 44 yards to set up a five-yard touchdown by Daniel Carter to cut the lead down to 17-14 in favor of Lakeland.

After that Lakeland would come back and respond back to the Raiders’ score with the Dreadnaughts taking a 20-14 lead with 6:25 on a Dywonski McWilliams five-yard pass to Chris Howard.

From there it became the Dreadnaughts’ show after recovering a Daniel Carter fumble midway through the third quarter and would be capped off with a Jaharie Martin one-yard touchdown run to increase the lead to 26-14 heading into the fourth quarter.

Lakeland’s final score of the night would come on another Martin touchdown run, this time from two yards out to increase the lead to 33-20 with 5:01 left.

St. Thomas Aquinas’ final score would come on a Theandris Freema 13-yard reception from Casteel to make the score 33-20 with 1:57 left in the game.

For Castle, who just completed his 42nd season as the Dreadnaughts head man, he was really happy about the win.

“Man, it feels great,” Castle said after winning the title for the first time in over a decade. “What can you say. It has been a while. I feel like we had been knocking, but hadn’t been able to get in. This football team is special. That had a dominating year and I am so proud of them.”