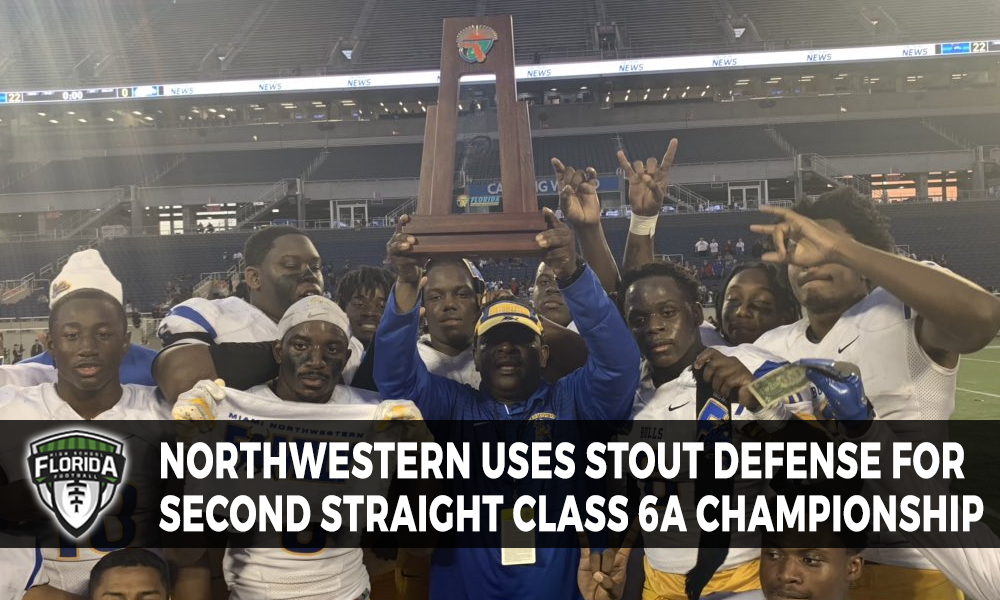 ORLANDO, Fla. – A turbulent season turned into jubilation on the same field that has seen two of the previous five state championships wins for Miami Northwestern (10-5) take place on.

Now make that three of now six total state championships the Bulls have been able to win in Orlando with an impressive defensive effort in a 22-0 shutout of Armwood (13-2) at Camping World Stadium on Saturday afternoon.

With that effort came some history-making news.

Second, the Bulls becomes the first-ever third-place team from a district to win a state championship, while becoming the lowest-seeded team in the two-year-old FHSAA playoff points system to win it all.

The effort that the Bulls put in would get going in the second quarter after an uneventful first quarter that saw punts, a fumble recovery for the Bulls and an interception for Armwood.

Miami Northwestern in the second quarter found themselves in sustaining a drive that took up 17 plays and 78 yards but ended in a missed 26-yard field goal that hit the right upright from Arlen Navarro giving Armwood the ball back.

However, the memories of that field goal would soon vanish completely.

On third-and-nine for the Hawks from their own 21 it would be Timothy Burns who read the play clearly, intercepting Cam’ron Ransom’s pass taking it back to the house for a touchdown to give the Bulls a 7-0 lead with 5:08 left in the first half, a score they would take into the locker room at halftime.

And the Bulls weren’t done yet.

Quickly as the second half opened up with the Bulls receiving the ball, they took that kickoff back to the house, before a penalty wiped it off the board.

However, the points that came off the board from the penalty would quickly return three plays later when Isaiah Velez connected with Nathan Noel on a 65-yard pass, with Noel beating all the Armwood defenders in sight to give the Bulls a 14-0 lead with 9:56 in the third quarter.

Velez finished the game with 9-of-18 passing for 141 yards, one touchdown, and one interception while Terrence Lewis and Calijah Kancey each had two sacks of the Bulls’ five total sacks in the game.

Armwood thought wasn’t giving up and they fired themselves back up with Agiye Hall’s 59-yard return on the ensuing kickoff.

However, whatever momentum the Hawks may have found was temporary when Ransom was blitzed by the Miami Northwestern defense with Terrence Lewis forcing the sack and fumble and defensive end Samuel Brooks recovering the ball and taking it back for the score to put the Bulls up 20-0 with 9:22 left in the third quarter with the extra point being no good.

And things would get worse for Armwood.

On the next possession, the Hawks, who were going backward thanks to a penalty found themselves giving up two more points to the Bulls when Ransom was sacked by Calijah Kancey as Ransom got called for intentional grounding in the process leading to the safety to put the Bulls up 22-0.

After that, it became a defensive struggle once more with both teams trading punts or taking a chance of going for it on fourth down with neither team scoring at all in the fourth quarter.

“We didn’t have the best year, but we had options in front of us. We didn’t say we would go undefeated, but our goal was to get here to try defend it and the kids kept fighting through the year and we got the job done.”