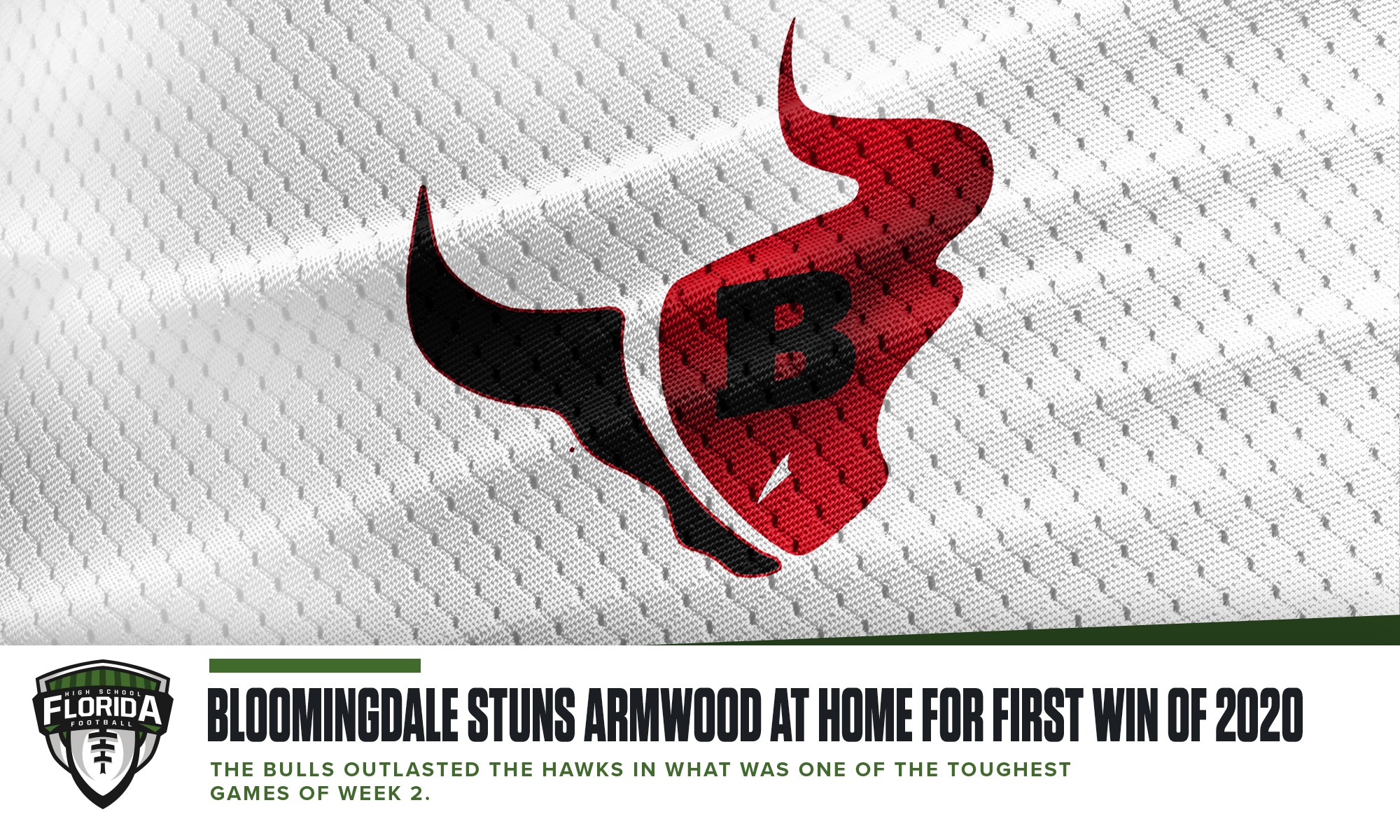 The Armwood Hawks entered Friday’s matchup against the Bloomingdale Bulls favored by 31 points.

It made some sense. Armwood is a football factory that features some of the state’s best players year after year. Bloomingdale, while one of the better teams in Hillsborough County, rarely gets a win over the Hawks.

Not in 2020. The Bloomingdale Bulls made a statement to start the season. Being the team that makes Armwood start the year 0-1 already gives plenty of bragging rights. How about being the team that starts Armwood off 0-1 as 30-point underdogs… and the final score is 15-14?

Many of FloridaHSFootball.com’s Top Games of the Week were delayed due to weather, so I decided to check out not if Armwood was leading, but instead by how much.

With two minutes till halftime, the score was 0-0.

However, while I was trying to figure out if my computer wasn’t working or if that score was accurate, Armwood quarterback Cam’Ron Ransom found receiver Charles Montgomery, a four-star Florida commit, who hauled in a 70-yard score.

Now, Florida high school football will likely see more entertaining second halves this season. But Week 1 in Valrico could definitely crack some list by the end of the season.

Armwood’s center snapped the ball over Ransom’s six-foot frame, the ball tumbled behind the quarterback and into the endzone.

Bulls linebacker Jamarion Neal dove for it. Touchdown, Bulls. They go for two, and they get two. 8-7, Bloomingdale.

A GUTSY decision by @JakeCoulson3 and OC @MatthewHike to go for two pays off with a huge second effort.

Nice defense from both teams, plus a missed opportunity by the Bulls, who scooped up a second too-high snap-on Armwood’s 10-yd line but failed to score, maintained 8-7 going into the fourth.

Ransom threw a pass to receiver Jamal Jones to put Armwood up 14-8 with just over six minutes to go in the game.

Next play, Notre Dame cornerback commit Riley Phillips waits for the punt, then takes it more than 50 yards.

Neal intercepted Ransom around the two-minute mark, but Bloomingdale failed to score.

It would be enough, though, to start the season with a win over an elite program.

Although he did make some really nice blocks and one gorgeous catch early on, I expected Top 100 receiver Agiye Hall – another former Armwood Hawk – to make up more of Bloomingdale’s offense. He’ll definitely be one to keep an eye on for the rest of the season.