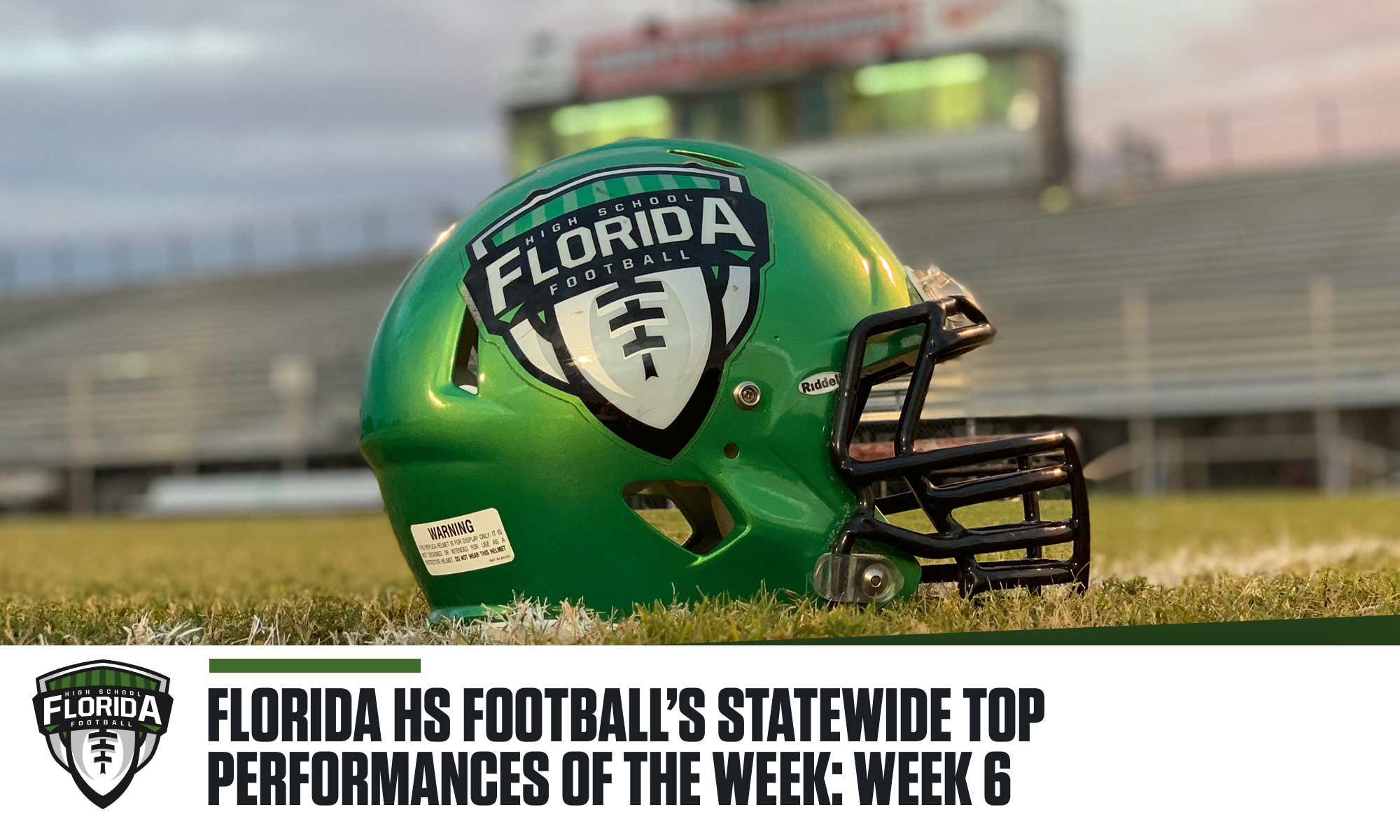 We are through six weeks of the regular season and we have another great list of top performances from 11-man and 8-man football to present to you. Check out who made the list of FloridaHSFootball.com’s Statewide Top Performance for Week 6.

QB Daunte Giles, All Saints – Had 218 yards rushing on 19 carries, scoring twice while going 3-of-5 passing for 87 yards and three more touchdowns, leading the Saints to a 55-7 win over St. Johns Country Day.

RB Abreon Torres, Astronaut – Had 24 carries for 288 yards rushing and three touchdowns for the War Eagles in their 38-6 win over Titusville.

RB/SAF Joe Brunson, Baker – Rushed for 208 yards and two touchdowns on 22 carries on offense and then intercepted two passes, returning one for a pick-six on defense in the Gators’ 34-8 win over Freeport.

QB Jacob Azizi, Bishop Verot – Accounted for 408 of the Vikings’ 566 yards of offense and throwing three touchdowns in a 40-24 win over Cardinal Mooney.

QB Zander Smith, Bradenton Christian – The eighth-grader lead the way for the Panthers in their 55-34 victory over Out-of-Door throwing for 354 yards and accounting for five touchdowns – four passing and one rushing – in the win.

RB Xavier Guyton, Bronson – Rushed for 247 yards on 18 carries and three touchdowns, plus converted a two-point conversion in the Eagles’ 26-8 win over Tenoroc.

DL Jertavis Black, Cardinal Gibbons – Collected four tackles – three for a loss – and had 2.5 sacks in the Chiefs’ 28-12 win over Monsignor Pace.

QB Tre Griner, Clay – Had three total touchdowns – two passing, one rushing – for the Blue Devils in their 50-22 win over West Nassau.

RB Al’Querioius Ray, Clay – Had three rushing touchdowns on 243 yards rushing and 20 carries for the Blue Devils in their 50-22 win over West Nassau.

DE/TE Christian Yousefzadeh, Creekside – Had three punt blocks for the Knights in their 31-17 win over Nease.

QB Jojo Patti, Dr. Phillips – Went 11-of-20 passing for 173 yards and two touchdowns in the Panthers’ come-from-behind 28-12 victory over Wekiva.

DB Marlow Freyre, East Bay – Collected eight tackles, a sack, and had an interception return for a pick-six in the Indians’ 41-35 win over Riverview (Riverview).

QB Cade Ross, Eau Gallie – Threw for 191 yards and three touchdowns plus had three carries for 46 yards as the Commodores went on to beat Palm Bay Heritage, 46-7.

RB Ershod Jasey, Episcopal – Rushed for three touchdowns for the Eagles in their 35-0 win over Deltona Pine Ridge.

WR Isaiah Shirley, Father Lopez – Had over 100 yards receiving and two touchdowns for the Green Wave in their 35-20 win over Wolfson.

ATH Danny Stutsman, Foundation Academy – Had 151 all-purpose yards for the Lions and three total touchdowns – two rushing, one receiving – on offense and collected three tackles on defense in a 35-14 win over Northside Christian.

DE Donovan Branch, Foundation Academy – Collected nine tackles on defense including five tackles for loss, and had four sacks in the Lions’ 34-14 win over Northside Christian.

RB Willie Knighton, Frostproof – Rushed for 113 yards and two touchdowns in the Bulldogs’ 34-18 win over Discovery.

WR Carson Vetor, Gulf Coast – Had 10 catches for 170 yards and four touchdowns for the Sharks in their 33-29 win over Lely.

RB Sedrick Irvin Jr., Gulliver Prep – Had only six carries for 124 yards rushing and two touchdowns in just one-and-half quarters of play in the Raiders’ 78-0 win over Somerset South Homestead.

DB Alloysius Tyson, Jefferson – Had two interceptions including one for a pick-six, and collected four tackles in the Dragons’ 40-30 win over King.

QB Chris Wiener, Jupiter Christian – Was 6-of-9 passing for 191 yards and threw for four touchdowns in the Eagles’ 66-0 blowout win over Bell Creek Academy.

LB Avenksy Ariste, Jupiter Christian – Collected two sacks on top of having six tackles for the Eagles’ in their 66-0 win over Bell Creek Academy.

Lake Gibson Defense – The Braves defense collected three sacks and had three interceptions in their 38-0 win over Hardee.

RB Duke Walker, Lake Minneola – Had 28 carries for 232 yards rushing and three touchdowns in the Hawks’ 42-0 win over East Ridge.

Marianna Offensive Line – The Bulldogs offensive line was responsible for opening up holes for five rushing touchdowns and controlling the line of scrimmage in their 35-0 win over Bay.

DE Rex Robich, Matanzas – Recorded a sack plus had a fumble recovery that was returned for a touchdown in the Pirates’ 38-3 win over Lake Howell.

RB Andy Treto, Mitchell – Rushed for 129 yards on 12 carries and scored two touchdowns for the Mustangs in their 42-14 win over Wiregrass Ranch.

CB Cole Castro, Mitchell – Collected four tackles and intercepted two passes for the Mustangs in their 42-14 win over Wiregrass Ranch.

RB Kendrick Raphael, Naples – The sophomore had 151 all-purpose yards for the Golden Eagles and scored one rushing touchdown, and had a kickoff return for a touchdown as Naples defeated Lehigh 39-0.

RB Jaden Rivera, Navarre – Had 13 carries for 169 yards and scored two total touchdowns – one rushing and one receiving – in the Raiders’ 50-21 win over Choctawhatchee.

DE Jeremiah Ross, Newsome – Had a huge game with six total tackles, five tackles for loss and three sacks in the Wolves’ 26-7 win over Lennard.

QB Trey Wainwright, Niceville – Went 11-of-14 passing for 236 yards and three touchdowns in the Eagles’ 45-0 win over Mosley.

QB Andrew Pickens, Oak Hall – Had 17 carries for 187 yards rushing and two touchdowns for the Eagles in their 54-8 win over Academy at the Lakes.

WR Cobie Bates, Oakleaf – Hauled in two catches including the game-winner as well as passing for a two-point conversion to help the Knights stun rival Fleming Island 29-22 in overtime.

RB Rommarrus Hinson, Olympia – Rushed for 241 yards on 24 carries and scored two touchdowns in the Titans’ 42-25 win over Orlando University.

RB JoJo Restall, Orange Park – Had 270 yards rushing and three touchdowns in helping lead the Raiders with a come-from-behind 38-35 win over Bishop Kenny

Palmetto Ridge Defense – The Bears have marked it three games in a row without giving up a single point on defense which scored four defensive touchdowns in a 63-0 shutout win over Immokalee.

WR Regan Ealy, Plant City – Had 12 catches for 220 yards receiving and two touchdowns for the Raiders in their 43-42 win over Tampa Bay Tech.

QB Logan Rogers, Port Charlotte – Went 8-of-14 passing for 223 yards and four touchdowns in the Pirates’ 35-13 win over Mariner.

QB Tyler Stone, Port St. Lucie – Had three passing touchdowns for the Jaguars in getting their first win of the season, a 26-6 win over Sebastian River.

RB Beau Herrington, Ridge Community – Had 270 yards rushing and scored six touchdowns for the Bolts in their 52-21 win over Poinciana.

RB Eddie Whipple, Ridgeview – Accounted for four touchdowns including the game-winner in the Panthers’ 34-27 win over Middleburg.

ATH Raheim Sanders, Rockledge – Had six catches for 165 yards and two touchdown, two carries for 59 yards, and had a kick return for 94 yards – giving 318 all-purpose yards – in the Raiders’ 35-7 win over Bayside.

QB Sammy Edwards, St. Augustine – Had three passing touchdowns and rushed for one more in the Yellow Jackets’ 27-7 win over Flagler Palm Coast.

LB Branden Jennings, Sandalwood – Collected three sacks and had two safeties for the Saints in their 17-8 win over their crosstown foe, Raines.

QB Gage Malkin, Satellite – Went 12-of-15 passing for 199 yards and four touchdowns in the Scorpions’ 63-33 win over Holy Trinity

ATH Dimitri Campbell, Seabreeze – Had two interceptions, forced a fumble and seven tackles on defense, plus had 26 yards passing touchdown and 25 yards rushing on offense for the Sandcrabs in their narrow 21-14 loss to Spruce Creek.

RB Jason Patterson, Sneads – The freshman running back rushed for 103 yards and three touchdowns in the Pirates’ 34-13 win over Bozeman.

Treasure Coast High Football Team – The entire No. 23 Titans football team gets huge credit for ending a winning streak of 65 regular-season games that Vero Beach had with their 17-16 win. It is a record that is likely to stand for many years to come.

RB Treyaun Webb, Trinity Christian (Jacksonville) – Had 20 carries for 209 yards rushing and three touchdowns for the Conquerors in their 33-7 win over Mandarin.

RB K’wan Powell, Vernon – Had 170 yards rushing and three touchdowns for the Yellowjackets in their 49-8 win over Graceville.

RB Cornelius Shaw, Victory Christian – Rushed for 334 yards on 23 carries and scored four touchdowns for the Storm in their close 41-35 loss to Berkeley Prep.

QB Tyler Huff, West Orange – Went 7-of-11 passing for 205 yards and four touchdowns in the Warriors’ 62-0 win over Windermere.

QB Alex Williams, Wewahitchka – The junior quarterback was one of two Gators players to rush over 300 yards in their 61-35 win over Liberty County, rushing 20 times for 345 yards and seven touchdowns.

QB J.J. Harding, Wildwood – The 8th grader making his first start for the Wildcats went 23-of-34 passing for 435 yards and four touchdowns in a 49-16 win over Williston.