Home Around The State Palmetto jumps out to early 21-0 lead before lightning delay; other news... 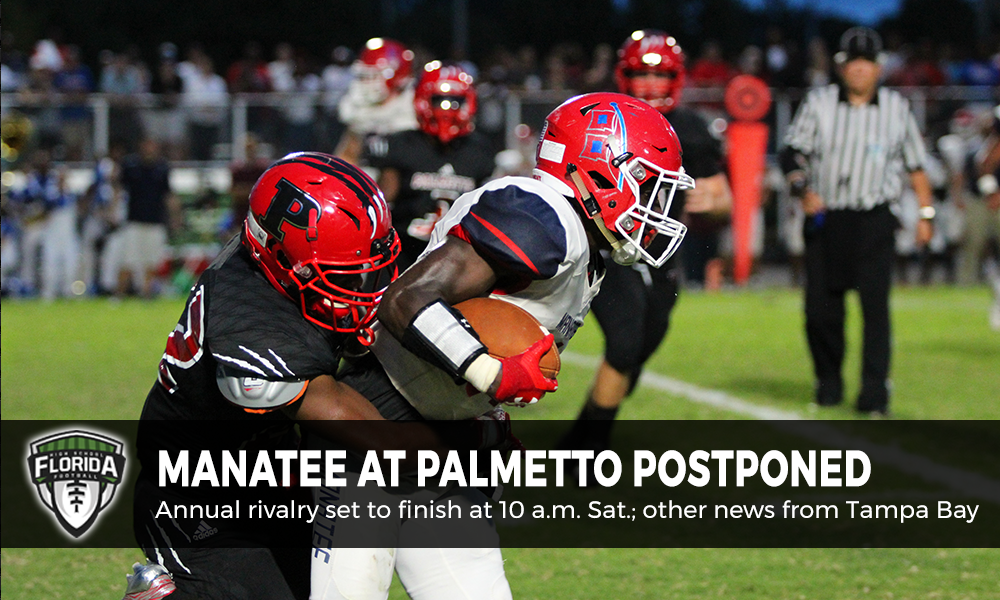 PALMETTO, Fla. – One of Manatee County’s oldest rivalry game will have to until Saturday morning to see a conclusion in its 2017 edition.

Due to lightning, the athletic directors of Manatee and Palmetto High Schools made the decision to finish the annual rivalry game on Saturday at 10 a.m., still to be played at Palmetto.

The Tigers lead 21-0 at the time of the stoppage, which occurred with 3:56 to play in the second quarter. Manatee will get the ball rolling on offense tomorrow morning.

To that point, Palmetto controlled the momentum throughout the first quarter and a half, as RB Elijah Davis took over on the first drive. He had 62 yards on just eight rushes in a quarter and a half and had some tough rushes on the evening. Davis scored from five yards away on the opening Tiger drive.

Davis would set up a one-yard quarterback sneak from Anthony Marino early in the second, putting Palmetto up 14-0.

Special teams errors and short punts gave the Tigers excellent field position throughout the evening, which was taken advantage of by Johnny Jones, who took a first-down play 30-yards to give Palmetto a commanding lead before the lightning delay.

For the Hurricanes, RB Joshua Booker took a lot of contact but powered through the Tiger defense for some nice rushes. WR Javarius Pollock showed some nice moves and turned a couple of small short receptions into longer gains.

Friday marked the second straight week where Manatee’s game was compromised because of rain. The Hurricanes’ matchup against Lakeland was cancelled after heavy rain and lightning at Joe Kinnan Stadium in Bradenton last Friday.

Friday also marked the second straight year the rivalry game was postponed due to rain. The Tigers and Hurricanes played the full game on Labor Day last year after it was called before kickoff.

FloridaHSFootball.com will not have coverage of the rest of the game – fans can catch updates through the Bradenton Herald and the Sarasota Herald-Tribune on its website or Twitter pages.

OTHER NOTES FROM TAMPA BAY: